In the last installment, Effective Drum Mixing – Part 2, we touched upon the subject of EQ and compression. And if you missed the first installment of the series, where we did basic levels, panning and the sort, check it out here.

In this last instalment we are going to add the rest of the drum tracks into the mix, the under-snare, the hi hat and the toms. We'll be using some basic EQ and compression on the snare and toms as well as putting expanders on the toms. I want to use expanders instead of gates so we retain a little naturalness to the drum kit.

Expanders work differently than gates in the way that they don't completely cut off the sound at the threshold like gates, but rather just lower the levels significantly, effectively increasing the dynamic range of the signal. In addition to that we'll be routing our drum tracks to a reverb for a little extra life as well as using parallel compression for some extra punch.

We already did basic levels in the first volume so the under-snare track should be at about the right level. I'm going to compress and EQ it a little bit. 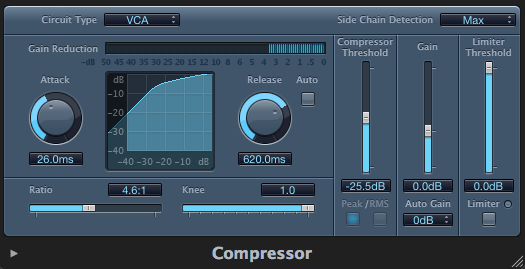 In the EQ department I'm filtering out the low-end and enhancing the rattling of the snares. I'm also adding a little meat to it in the 220 Hz region and I'm cutting out some annoying boxy frequencies I've found that were hiding in around 700 Hz.

This is what the under-snare sounds like now. Both EQ and Compression turn on halfway through. Notice the incredible difference.

Let's listen to what we've got so far, and about halfway through let's add the unde-snare to the mix.

The snare sound is much more punchy with both tracks present.

We're almost to the toms, but let's not forget about the hi hat. It's already panned a little to the right so I'm just going to filter out the low frequencies and boost a little at around 5.9K Hz for the metal *tch* *tch* sound to cut through. 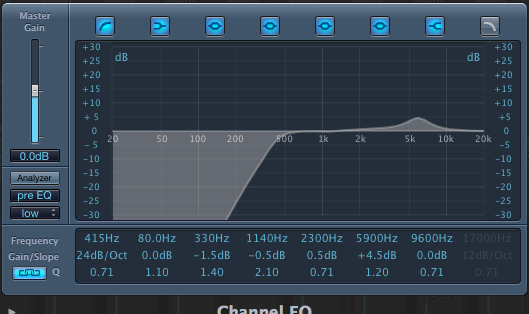 We're going to use a noise gate on the toms, but we're not going to kill them completely. Instead, when the toms aren't playing there is going to be a 30dB reduction in volume on the track, only to be lifted when the tom sounds go over the threshold of the gate. This cleans up the drum tracks nicely since the bleed from the other tracks that are present in the toms are masked by the louder, more present tracks.

Whenever the toms are played the gate is lifted, and when they pass under the threshold the noise gate lowers the level of the tom track by 30 dB, masking it with the other dominating tracks.

Listen to how it works here, these are only the tom tracks:

Now that we've cleaned them up nicely it's time to compress and EQ them so they get even more powerful in this part.

For me, the easiest way to make your toms sound big and powerful is equalization. You can make your toms sound bigger and larger than life with the correct EQ. Here I have added a drastic amount of low end to this floor tom, but that's perfectly fine because that's the sound I'm going for. I want it big and powerful. The easiest way to equalize toms is to first find the offending and unattractive middle frequencies. Cut them first and then add low and high end if required.

You can see here how much low end I've added to the floor tom. 24 dB at 80 Hz! That's a lot! But it sounds great! You see how I've cut out a lot of the mids, taking out the boxiness of the tom at 590 Hz. The frequency around 215 Hz also annoyed me since it has a low boomy sound that was muddying up the mix. With surgical EQ I cut out that offending frequency. Then to top it off I added a little attack at around 3 kHz.

Listen to how changed this tom sounds now.

We'll do the same to the next tom, finding the correct frequencies to boost and cut. 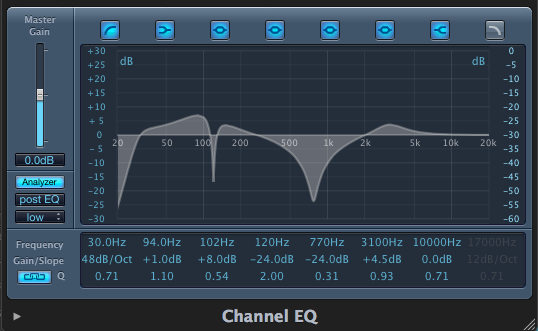 This time is a little different since I had a big buildup of low frequencies at around 120 Hz that was clogging up the clarity of the tom. Thus I EQed that out and followed the same guidelines as before.

This is how that tom break sounds in context with everything else. 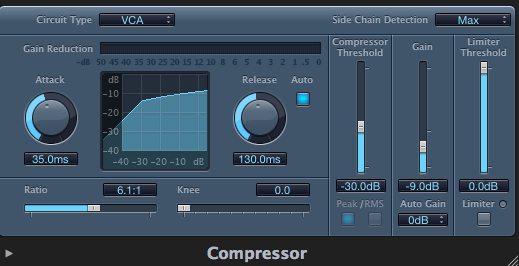 Let's add a little compression to the toms before we move on. I'm compressing these toms pretty heavily, or about 8-12 dB of gain reduction. I'm using the VCA circuit, which seems to work better than the other ones. The Platinum circuit in Logic is really aggressive and sucks the life out of the toms. But the VCA circuit seems to work pretty well for these toms.

Here's what we've got so far:

All right, so we've got a pretty nicely mixed drum track. It's time to add some reverb to it and make it come alive.

I'm sending equal amounts and then positioning the reverb fader so it just gives our drum kit a little space and ambience. I'm selecting one of Space Designer's presets, in this case Drum Booth One, which is a nice 0.8 second drum room. This adds a nice roomy feel to our drum kit. 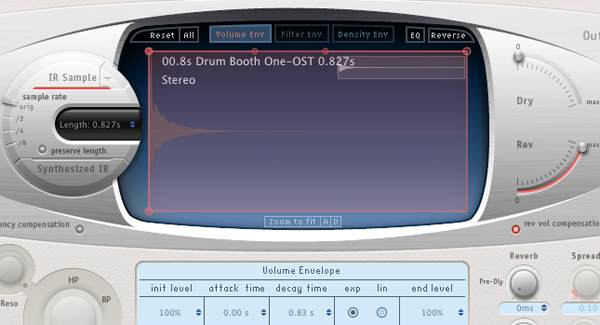 I'm also going to send the snare to a different reverb, giving it a different sound and more punch. I'm doing this the exact same way, sending it to another aux bus where I insert the Space Designer. In this case I'm adding more of the over-snare than the under-snare since I don't want the rattling of the snares to be too dominant.

I'm also EQing the reverb return so it sounds better. I'm EQing out the low frequencies since there is a lot of kick-drum bleed in the snare mic. I'm also cutting the highs and scooping out a little bit of the mids since there is an annoying telephony frequency clogging up the reverb.

EQing reverbs is a great technique to use when you want greater control over your reverbs. I'm using Space Designer's built-in EQ but you can do the same by inserting an EQ plug-in before your reverb engine.

Let's listen to a few bars of the drum track here. First few bars are dry, then I add in the drum room reverb. Lastly, I add a little bit of the snare plate for extra punch. I un-muted the other tracks so you could hear it in context with the rest of the instruments.

In order to give these drum tracks that last touch of punchiness we'll use the New York Compression Trick. This track is basically another word for parallel compression. By sending these tracks to an aux bus and compressing them separately we get the naturalness and dynamic range of the original tracks with the punchiness of overly compressed drums.

I'm sending every drum equally to bus 4. That way we get the exact same copy of the drums on one bus. 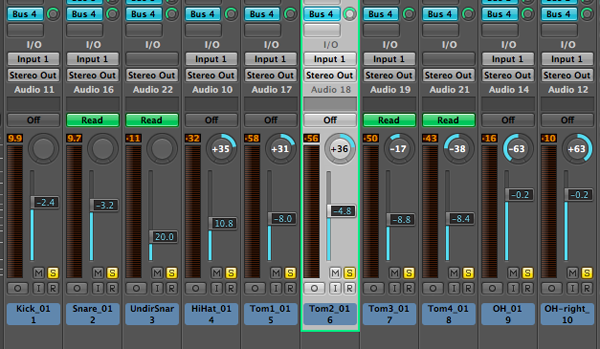 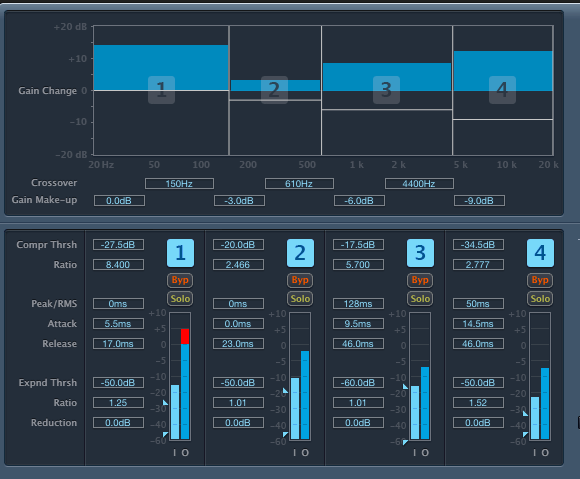 Here is what it sounds like. The first few bars sound really dull compared to the punchiness of the second part.

Listen to the normal compressor here:

Obviously we could play along with these drum tracks forever. I certainly took more time in writing this tutorial than usual since I sometimes forgot all about time and place while I was experimenting with different EQ, compression or reverbs. Over these three tutorials I've taken you through levels, panning, EQ and compression as well as adding reverb and parallel compression for that extra touch.

Listen to what we started with in the first tutorial:

Now listen to how we've transformed that roomy, boxy and muddy drum sound to a professional sounding drum mix:

I hope I've enlightened some of you out there that have had problems with their drum tracks, not knowing where to start or how to go about mixing the drum kit. We've come a long way from that first drum track, and we've ended up with a cleaner, punchier and better drum mix. What do you guys think? What would you have done differently? Too much compression? Way too radical in the EQ department? Still too roomy? Let me know!