An Introduction To 3D Mixing

Mixing is arguably the most important stage of the music production process. When done properly, one can do everything from add energy and warmth to a sound to completely alter the feel and flow of an entire piece of music.

In my next few tutorials, I will be taking an in depth look at the mixing process to help you gain a better understanding of mixing concepts and in so doing, present one possible workflow scenario to help you streamline the process. For these tutorials I will be using Logic, but the concepts can be applied across the board.

3D mixing is a way of thinking of the mixing process in a spatial (3 dimensional) way. In short, it is a way of looking at the elements of the mix in terms of pan (dimension 1), amplitude & frequency (dimension 2), and depth (dimension 3). The goal of mixing in this way is to have each event exist in its own sector of the 3 dimensional song space while maintaining the clarity, warmth and pumping quality that is a part of all good mixes.

The first thing we want to do when beginning a mix is to stop writing! It is always recommended to keep the writing, mixing, and mastering processes as distinct entities (although sometimes it's easier said than done) as this will help you to increase productivity and quality by only focusing attention on a single aspect. There is a quasi-famous quote to the effect that changing one thing in a mix changes everything. You will find that this is completely true and all the more reason not to get halfway through a mix and then decide to start adding extra synths as all sense of balance will be lost.

To help commit to the mix as a process unto itself (and save CPU) it is recommended to convert all MIDI to audio from the onset at the highest bit depth and sample rate possible. The sample rate is open to some contention with many suggesting to go no higher than 48Khz as everything above is seen as overkill. We will get into a deeper discussion of bit depth and sample rate in a later tutorial, but for now we will work with the 48Khz model as it will allow us smaller file sizes while maintaining a high fidelity recording.

To begin, I have pulled a few loops from the Logic library. I have kept it rather simple as a small number of strong, well placed tracks is much more effective than a large number of muddy tracks competing for attention. You should not hesitate to throw out excessive tracks that do not fit in your mix, even if you have spent hours producing them. This is another reason for keeping the writing and mixing separate as you will have a more objective view if there is adequate time and space between the two processes.

For the beat, I pulled the TR-808 Hip-Hop Beat #3, the Thumpy Hip Hop Bass #14, the Mature Hip-Hop Piano and Mature Hip-Hop Synth all from the Logic library. I had trouble finding a vocal that fit and although this one does not exactly work, Remix Vox Electronic is what I settled on. It is pretty heavily processed, but will do for the vocal example. I then used the Logic command 'demix by note pitch' to break the drum beat into its constituent parts, then relabeled and colored everything. 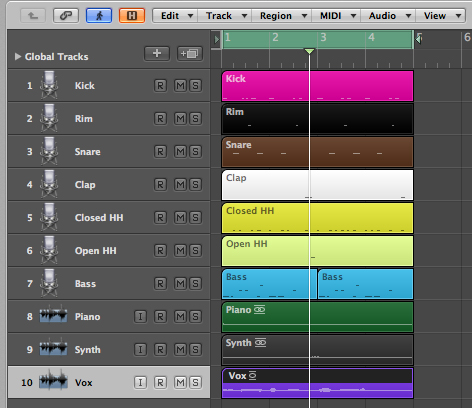 I then went to the 'settings' menu and changed the sample rate to 48K which (in theory) allows for an accurate reproduction of audio frequencies up to 24Khz: far beyond the human range of hearing.

Here is the loop so far. I'm sure you will agree it is in need of a bit of work.

It is important to note that any audio in your project recorded at a different sample rate will either be condensed or stretched out after making the switch in sample rate. The only reason the audio was not affected in this instance (vox, keys and synth) is that these particular files are Apple Loops, a type of elastic audio file. If you have audio in a project recorded at a different sample rate, you will either have to re-record it or convert it (in Logic this is done in the audio bin under 'Audio File>Copy/Convert or with an option in project assets called 'Convert audio file sample rate when importing').

The next thing to do is to record the MIDI instruments (drums & bass) and import them as audio. To do this I simply soloed every track one at a time and 'bounced' (a Logic term basically meaning record or print) them to audio. In the bounce menu, I chose to bounce them as WAV files @ 24 bit (Logic's highest bit depth) and at the 48K sample rate we specified in the previous step.

It is also important to note that I am recording the MIDI dry, with no EQ, compression, reverb, etc. There will be a time and place for those effects, but for the most part the audio should remain free of all non-essential, non-creative effects. You will want to use some degree of case by case judgement here; some slight EQ and compression will not hurt, but the mixing stage and not the writing/recording stage is where the bulk of this should occur. If you are using an effect that completely alters your sound (like the effects used on the vocal example above) you may consider recording that effect into the audio file, but this should be mainly saved that for post EQ/compression as well.

The next step in the process is to import the newly created audio files and to arrange them into groups. The most obvious group is the drum kit. To group the drums, I will create a bus track and send the individual outputs to this bus channel. This allows me to control all of the drums with a single fader while giving me the flexibility of processing the sounds independently on their own channels. After I have the sound and balance I want, I will 'glue' the drum sounds back together by processing the sub-mix channel with EQ, compression, and some slight reverb to make the kit sound like a single instrument occurring in a single acoustic space.

It is important to not alter the individual balance of the drum tracks once you have processed the sub-mix channel as it will alter the EQ balance and also affect how the compressor responds to the incoming dynamics. It is therefore important to have the individual drum sounds sounding the way you want them and to have them balanced before EQ-ing and compressing the sub-mix channel.

Grouping tracks in this manner is very helpful as it increases the amount of control you have over various elements of a single sound and should be employed wherever possible. Another example will probably happen later on if I decide to multi-track the vocal. Each individual vocal track will be processed differently and then recombined to form a tight and cohesive whole through sub-mix EQ, compression, reverb and whatever other effects come to mind. 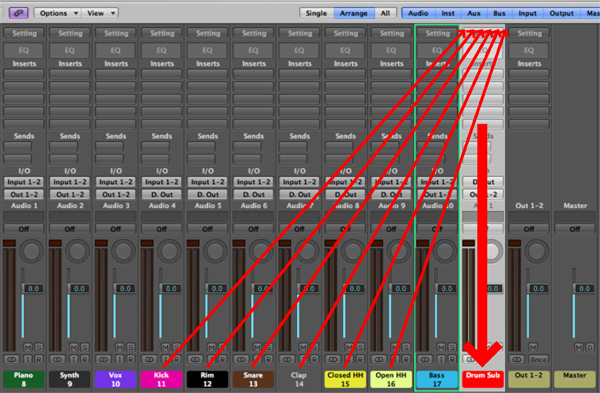 At this point it is a good idea to listen through your individual tracks and pick out any artifacts present; especially if your tracks are live instrumentation recordings as these are most likely to contain noise, clicks, hums and anything else that should not be part of the song. If any unwanted artifacts are present, you will want to try to get rid of these with a high/lowpass filter, noise gate, volume envelope, cut edit, or any other tool at your disposal. If these tools prove ineffective, you will probably want to re-record your session as those artifacts will only cause consistent problems throughout your mix and may never be fully cleaned up. 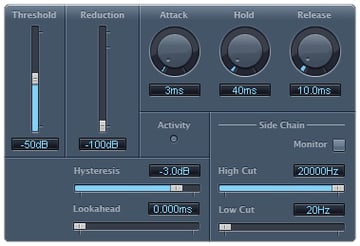 This should help get you started towards creating cleaner mixes and serves as a good jumping off point for the techniques that are yet to be explained. I recommend experimenting around with some of the concepts here and really try to listen to the differences they make. In the next tutorial, we will continue to look at 3D mixing and start to move away from these more preliminary steps and begin to create a strategy for placing our sounds in the 3 dimensional sound space.

Will Walker
Over the past 10 years, Will has spent his time moving between three of the world's top music capitals (Detroit, Berlin, Los Angeles), doing everything from DJing gallery and festival openings to organizing and promoting club and warehouse multimedia events. He has been working with DAWs and various other computer based instruments and technologies for over 12 years, and is currently developing a studio album (or maybe a few EPs?). He publicly admits to enjoying some early Madonna.
Looking for something to help kick start your next project?
Envato Market has a range of items for sale to help get you started.