With Logic Pro 9, Apple introduced the Amp Designer. The Amp Designer is a big improvement on the legacy Guitar Amp Pro plug-in, but it’s also quite different. Let’s take a look at it.

You can find Amp Designer on the Inserts menu under Amps and Pedals. Pull it up on one of your guitar tracks. It looks like this:

For this tutorial, I’ve used a clean electric guitar loop as my source material. Here’s what it sounds like:

Using Amp Designer, I was able to quickly turn it into a distorted guitar riff, and the plug-in itself doesn’t sound too unrealistic:

That’s not necessarily a setting I’d actually use, but it shows you some of the ways the plug-in can change the sound, including the tone, the EQ, the distortion, and the reverb.

Here’s how to design your own amp.

If you want a matched set—by that I mean an amp and a cab that go together—the first thing to do when designing your amp is to chose an amp model. These can all be found under the Model menu in the bottom left corner of the plug-in.

When you pick an amp model, a matching amp and cabinet will be selected, and the microphone that is generally used with that amp is chosen. Since all sorts of mics are used by all sorts of amps, this is mainly a guess as to what sort of music you’ll be making and which mics suit that.

Hopefully you’ve seen your share of real amps, because none of these are named after their real-world equivalents—the only way to tell is by looking at the amp skin and trying to remember which amp brand it most resembles. This is most likely to avoid having to pay licensing money to those companies. For instance, the Vintage and Modern British Stack models are obviously modeled after vintage and modern Marshall stacks, respectively.

If you don’t want a matched set, go straight onto this step and pick your amp first. There are amps in there that are clearly modeled after popular brands, and some that are more there to fulfill a need, such as the Turbo Head which gives you a grunty metal sound.

Now it’s time to choose a cab. There are small practice cabs and massive four-cone cabs, and even a direct option (although that seems to defeat the purpose of amp simulation!). Even with all the amp settings the same, each cab sounds wildly different. Spend some time choosing the right one for the sound you need. 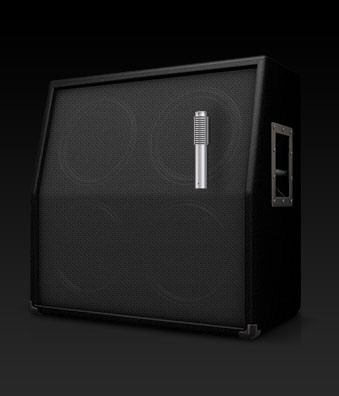 Another important factor is the microphone. Unfortunately, you only get to choose and place one, which seems a little odd — while you can stick a single SM57 on an amp and get a decent sound in real life, most people use a combination of two or more mics, whether it’s two SM57s, or a close-up mic and a room mic, and so on. I do feel that this is one of the real limitations of Amp Designers, but here are your options in any case:

If you’re not sure what these terms mean or why you should choose one over the others for your song, refer to this article to learn more about them.

If you roll the mouse over the cab, a little box will pop up that allows you to place the microphone: 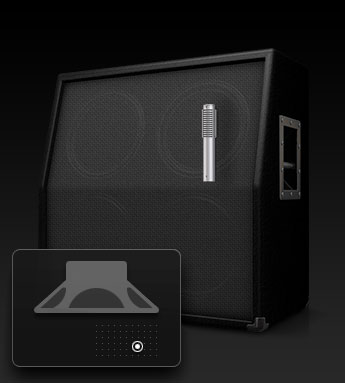 You can place it closer for a more direct sound or pull it back for a roomier sound, and you can pull it to the left for a tinnier sound or to the right to capture more bass.

My only other real problem with Amp Designer is also in the area of microphones, and it’s that you can’t control the angle of the mic — just the proximity and the placement. The angle of the mic, even if the mic stays in the exact same place, can vary the sound a lot.

Now you’ve chosen a rig and it’s time to configure the amp. Let’s take a look at the controls.

The EQ controls are quite simple — there’s a knob for each of the three general frequency bands:

You pull to the left to cut and to the right to boost. It’s a fairly crude EQ, as you’d find on an amp and designed to simulate the particular amp you’re using (all amp EQs, even with the same three knobs, produce different results at the same settings, so don’t be surprised if you switch amps to find your EQ out of whack—this is part of the realism).

We then have the reverb and effects. There are self-explanatory on/off switches for these. The “Level” knob determines exactly how much of the sound will be reverb in relation to the amount of sound that is direct.

The effects section allows you to choose between tremolo and vibrato, both of which are controlled by these two knobs:

Finally, we have the ubiquitous presence and master controls. Presence is a sort of dark/bright control that gives you more control over the tone, once you’ve already sculpted it with the EQ. Master is, of course, the master output level.

Once you’ve learned what each of the controls in Amp Designer does, it’s a piece of cake to put together amp rigs that sound good and achieve the sound you want. I’ve been surprised by how good Amp Designer sounds, especially for a stock plug-in that comes with the DAW. Of course, as any guitar lover would agree, nothing yet will replace the sound of a real amp being recorded through real mics.