An Introduction to Propellerhead's Groove Engine

For those of you that are reasonably new to Reason and Record, or have just updated to the most recent versions, the concept of the Groove Mixer might not be one your familiar with.

To get you guys started in the world of groove creation this tutorial guides you through extracting, applying and saving your new grooves. More advanced technique and examples to follow in future tutorials.. and as always suggestions are welcome.

Let's say you have a drum loop that you love the feel of. It's likely this is due the loops inherent groove. Simply put, a groove is the timing of a performance. Each hit is slightly off, making the end result more 'human' and often giving it a pushed or laid back mood.

When drummers play they often have their own grooves. These human grooves have been adopted over time and used in drum machines and various software. Propellerhead's groove engine offers both human and machine based grooves and it also features the ability to create user templates.

I have loaded a drum loop into the Dr. Rex player that has an obvious groove. Let's take a look at how we can apply a factory groove to it, or alternatively extract its own groove and apply it to other material.

A loop with groove.

First up we'll take a look at how to apply the grooves supplied with Reason to your loops and MIDI recordings. Of course Reason doesn't support audio, and although Record does, grooves have to be applied to MIDI. This can be MIDI you have recorded, imported MIDI files, or information generated from loops in your library.

To convert the loop in our Dr. Rex into MIDI information, we need to right click and choose 'Copy REX Loop to Track'. This will convert the loop to MIDI and place it on its own dedicated track. This way you no longer need to use preview mode and we now have the MIDI we need to get going.

Copying the REX files MIDI to a new track.

The MIDI is now on its own track.

At this point we need to open the ReGroove mixer. This is the device used in Reason and Record to apply any and all grooves. It can be opened by hitting the small 'G' logo in the bottom right of both the Reason and Record interfaces.

Once opened you will be presented with what looks like a traditional eight fader mixer. These eight sections actually represent eight independent grooves. For the minute let's take a look at how to apply just one single groove to our material.

In the Arrange window you should see a drop down menu available on each track. When you hover over this menu you should see 'Select Groove' pop up. In this menu you will see a list of four banks 'A,B,C and D'. Within these four banks are the eight visible grooves. This gives you a staggering 32 different grooves that can be used within any one project! I'm not sure if anyone would need this many, but they are there none the less. 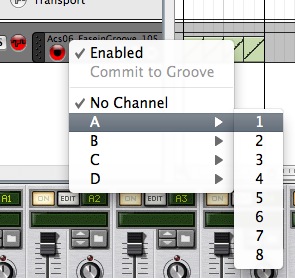 By simply selecting Bank A and Groove 1, you have now assigned your first groove to your MIDI data. of course at this point you shouldn't hear any change as the settings are all at zero and no groove is loaded, but by focusing on the first slot in the ReGroove mixer we can now start to add some effect.

Start by loading a groove from the Props factory library into the first slot. This is achieved by hitting the disc button and navigating to the groove section. There is a good choice of grooves here, some human, some machine. Pick one you like the sound of and load it up.

Now moving the main fader up in the first slot should start to hear the groove in action. You can add as much or as little as you like, remember everything you are doing at this point is none destructive so it can be reversed. In this section you can also add shuffle and slide if you like. There is also an option to pre align (or quantise) your notes before the groove is applied.

The groove engine in action.

The loop with a factory groove applied.

Now you know how to apply preset grooves to a sound you should have no problem trying different presets and effecting any MIDI. This is great but what if you want to use the groove of the existing loop, luckily the groove engine makes this really straight forward. 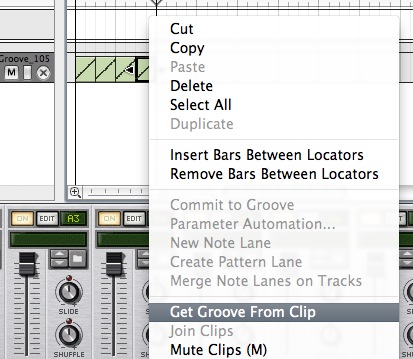 Extracting the groove from a MIDI clip.

With your MIDI loop already copied to its own track you can simply right click on the relevant clip and you should see 'Get Groove From Clip'. As soon as this is completed a 'user' groove will be assigned to the next free slot in the groove mixer. This new groove can now be applied to any parts in your project.

The groove is now a user file and can be applied to other loops.

The original loops groove is applied to a guitar and the two are mixed.

Step 4 - Applying Multiple Grooves and Committing Them to Disk

The ReGroove mixer offers 32 slots, and as I mentioned before you probably wouldn't use nearly this number in a typical project. But the numerous slots can be great for adding variations of the same groove. You can easily load the same groove into 3 or 4 of your mixers slots and have different intensities and shuffle amounts. You could even have one that is pre-aligned and one that's not. These can be assigned to your parts as you see fit.

Using the ReGroove mixer to apply multiple and variated grooves.

If you are totally happy with the way a groove is sounding, or you want to free up a mixer slot, you can commit the groove to the file permanently. This can also be useful if you want to send a MIDI file to someone with a new grove imprinted. To achieve this use the drop down groove menu and click 'Commit to Groove'. Once clicked the groove will turned off and imprinted onto the MIDI part. 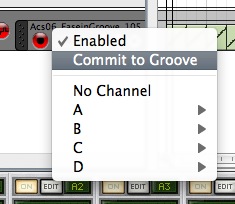 Committing the groove to a MIDI clip.