An Overview of the CAGED System

The CAGED system is a very large yet simple step in the right direction for the guitarist of any level. It teaches things as basic as understanding the fretboard, all the way to understanding and playing different modes. If you want to learn to solo like your favorite guitarist, it starts right here.

For the sake of convenience, this entire tutorial will be based on the key of D major. Just to clarify, the form IS called Form C, even though its in the key of D. The reason it is called Form C is that if you slide the pattern down to open position, you will see the open C major chord in the pattern.

Anyway, now that we have established that we are playing in D major, it is obvious that the root note must be D. For this pattern, start with your fourth finger (pinky) on the fifth fret of the A string. 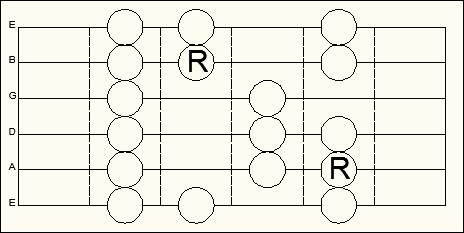 Form A, like Form C, will start on the fifth fret of the A string. With Form A, however, you start with your second (middle) finger. It is called Form A because if you shift it down to open position, you can see the open A major chord in the pattern.

Learning this pattern is slightly more tricky than Form C because a shift is required when moving from the G string to the B string. So, start at the bottom root note, and work your way up the pattern. When you play the notes on the G string, you will use your first (index) finger, your third (ring) finger, and your fourth (pinky) finger. You will then shift up a fret by using your index finger on the next note. Once you reach the top of the pattern, start descending.

On the B string, you will use your fourth finger, third finger, and first finger, and then use your pinky on the first note you play on the G string in order to shift back down a fret. From there, play the rest of the pattern all the way to the bottom, and then back up to the root.

Form G is possibly the most difficult pattern in the CAGED system. It has not only one shift, but two shifts: both down a fret and up a fret. You start it with your fourth (pinky) finger on the tenth fret of the low E string. The notes on the D string will be played with your first (index) finger and your fourth (pinky) finger in order to shift down a fret on the next string.

Form E is probably the most basic pattern due to the fact that there are no shifts. It starts with your second finger on the tenth fret. Quite simply, make your way up to the top, and come back down, then up to the root.

The D form is the fifth and final major scale pattern in the CAGED system. Like the G form, it too shifts both down a fret and up a fret. Unlike any other form, however, it starts on the D string.

The first note of this pattern is to be played with your second finger on the twelfth fret of the D string. After you play the third note on the G string, shift up and play the first note on the B string with your first finger. Play the rest of the scale up and then start descending. 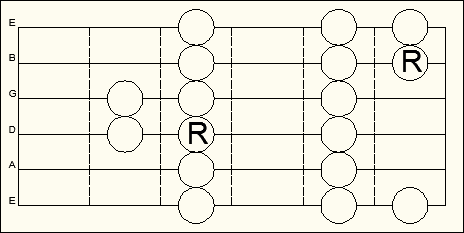 You now know all five major scale patterns! These patterns allow you to play all over the fretboard, and as long as you remember which pattern you're in, you'll never hit a wrong note! Although you know these patterns, there is still much more to learn, such as comprehensive scales and modes. Even though this is only the beginning of a long process, it is still a HUGE step forward. Good luck!

Steven Hersch
Steven Hersch was born and raised in Pittsburgh, Pennsylvania. He is a senior at Duquesne University where he study classical guitar and music technology. He enjoys writing and listening to a wide variety of music, and enjoys learning music theory.
Weekly email summary