Animating the Animate: How to Craft Creature Sounds

As with many sound design techniques, there are an infinite number of ways to create compelling creature sounds. However, as with all sound design, the best products generally result from great source material. Starting with your own recordings of animals and humans means that your product will sound unlike anyone else!

In this tutorial we’ll look at a few simple techniques that can be used to create interesting creature sounds with a wide variety of uses. We’ll use Sony’s Sound Forge (we’re using version 8.0) and some of the built-in effects to create these sounds.

The first thing we’ll do for our creature sounds is to determine what type of creatures we’d like to create, and then find or record some appropriate source material. For this tutorial, we’ll make a generic monster sounds with a slight ‘human’ quality to them, which might be suitable for use in a game or film.

I’ve recorded some simple vocal samples as the basis of the creature sounds.

I’ve also downloaded a few samples from freesound.org which we will use to give a more animalistic tone to our creature sounds. I’ve edited these downloaded samples so that each one is a ‘one-shot’ sound, with a relatively fast attack. The reasoning behind this will become clearer later in the tutorial, but here are the edited samples.

We have three source vocals, and three animal samples we will use to augment the source. Before we do that, however, lets use some simple techniques to give the source vocals more body and depth. 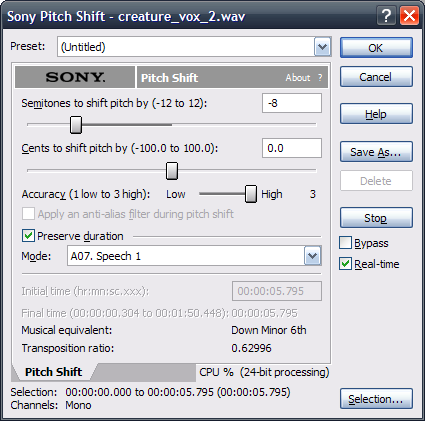 Next we’ll apply some amplitude modulation to the vocals. This gives each one a bit more of a guttural sound and adds some subtle motion to the waveform. 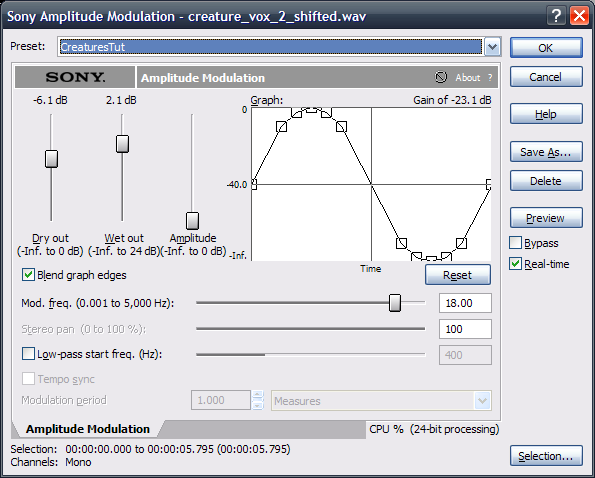 Here are our sounds so far:

Now that we have some basic effected vocals, we’ll turn to our animal sounds. There are a number of techniques that can be used to combine one sound with another. Simple mixing of the two wavefiles, vocoding, and convolution are just a few. For this tutorial, we’ll turn our attention to Sony’s Acoustic Mirror plugin.

Acoustic Mirror was intended as a convolution reverb. You might recall in our tutorial on creating wind sounds we talked about how convolution plugins can also be used for purposes other than reverb. Here, we’ll take the animal samples and use them as source samples in Acoustic Mirror, which will apply the convolution to our vocals.

You might remember that in Step 1 I mentioned editing the animal samples. Because Acoustic Mirror uses the entire waveform for an impulse, you’ll want to use files with relatively fast attacks so that there isn’t a long delay between the start of your vocal sample and the start of the impulse.

We’ll apply the convolution with the same methodology for each of our vocals, but for the sake of brevity, I’ll only demonstrate the settings for one of the samples.

As you begin to play with these settings, you’ll quickly find that each one has a unique effect on the final output. Depending on the nature of your impulse file, you will find that Response Delay, Wet/Dry balance, ‘Apply envelope…’ and the high/low shelf settings all can help shape the final product. I suggest experimenting with each until you find a setting that you like. 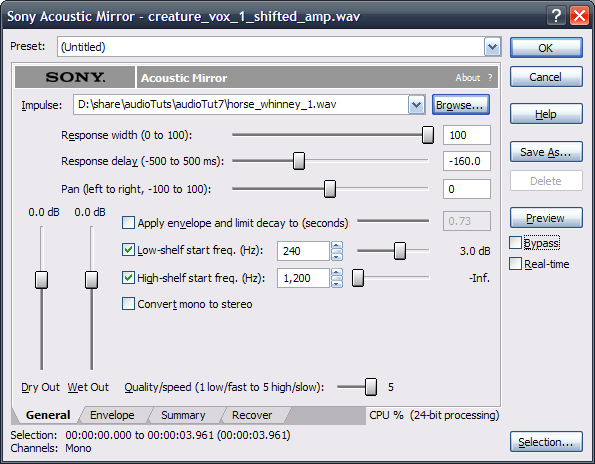 Here is the output of the settings above: 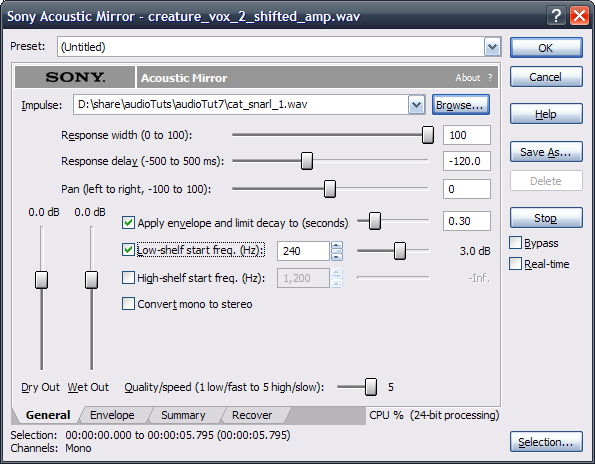 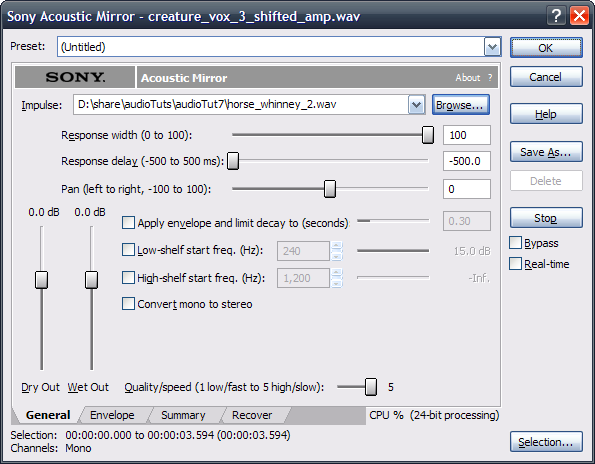 These are just a few of the techniques you can use to create compelling creature sounds. Experiment, try new things, abuse your tools in unintended ways, and enjoy the results!