One of the most challenging aspects of arrangement to a beginner (and even some more experienced producers) is changing the tracks energy level. So you may find that moving from a busy section of your track to something a little more chilled present some stumbling blocks.

In this tutorial I've used a project that was developed during a one to one teaching session. The project was used to demonstrate all sorts of arrangement technique but the breakdown section should shed some light on the subject in hand.

Step 1: The Project In Action

In this section if the project you can hear a number of drum and bass parts playing, the energy at this point is relatively high and moving to a spacey breakdown is going to take some work.

In the next section we'll take a look at how it was done in this case. 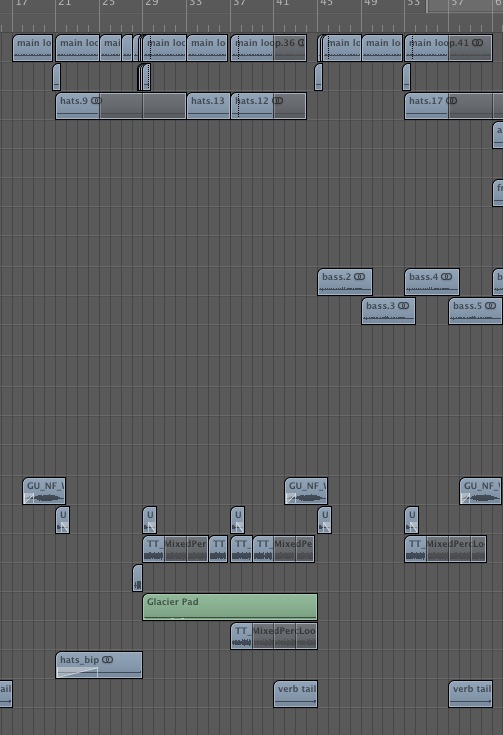 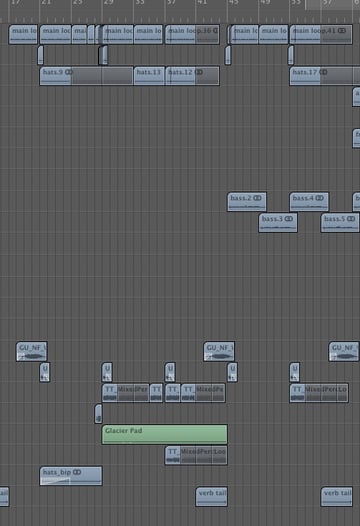 The high energy section in action.

There are literally countless ways of dropping energy and breaking down into a more minimal section but often the techniques used remain the same. It's all about the combination of parts used and using automation to create a smooth, seamless transition.

As this project is already constructed I won't be showing it being built form scratch but I will isolate specific techniques used and explain how they were carried out. Hopefully this will give you some ideas when you are constructing your next break.

So, here is the breakdown section in it's entirety, playing from the point we heard in the last clip. In the following sections we'll look at the techniques that were used to bolt this all together. 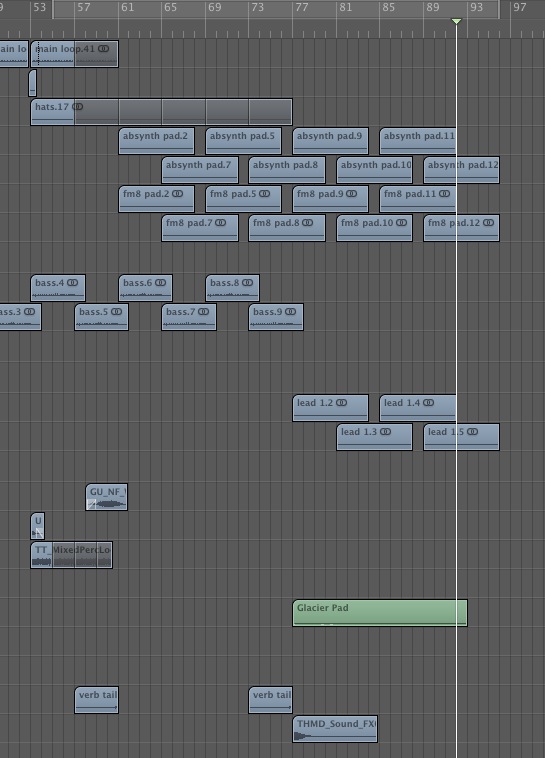 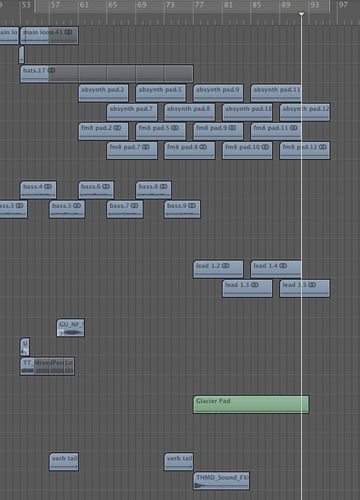 The breakdown plays back.

One great way of creating a smooth transition is to have some level of continuity in your mix. If you can achieve this then even pretty drastic changes of mood can be easily accepted by the listener and not be a massive shock.

To give you an example of this when the breakdown starts many of the elements are dropped in one way or another but the bass and high hat loop are left in. By doing this I was able to completely drop the main drum pattern without too much of a drop in energy.

Here is the section I'm talking about with all the pads removed so you can hear whats going on. 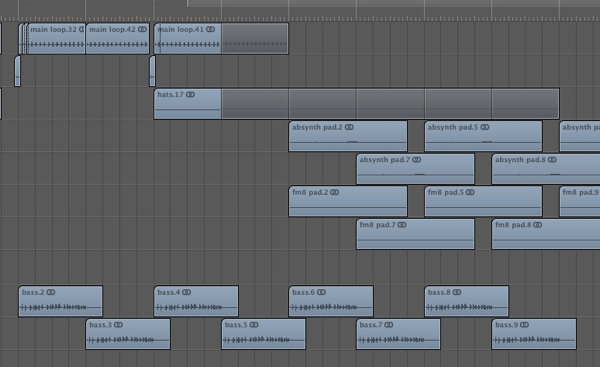 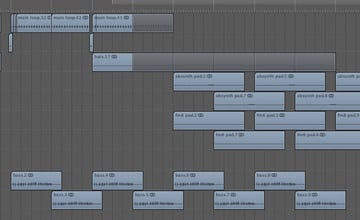 Some elements remain for continuity.

The parts left in are isolated.

Another simple but extremely effective trick is to use very basic volume fades. It may sound obvious but using a number of fade ins and fade outs across a transition can make or break it.

For instance I wanted the hat loop I left in over the break down to melt away without being dropped too suddenly. I achieved this by slowly reducing its level over a decent amount of time. I also raised the level of reverb on the part as I went. This combination of these two fades creates the feeling it's leaving the stage, so to speak!

The hat fades out over time.

Here is the fade in question both in isolation and in the mix. Notice how when the entire mix is played the hat loop just melts into the background. You may not have even noticed this happen on first listen. This, my friends, is the idea !!

Now listen to the hat fade in the mix.

You don't just have to fade in level either; fading frequencies is a good way to achieve a similar effect but with some nice variation. If you use a mixture of filter and level fades you should build up a n interesting sonic picture thats involving to listen to. 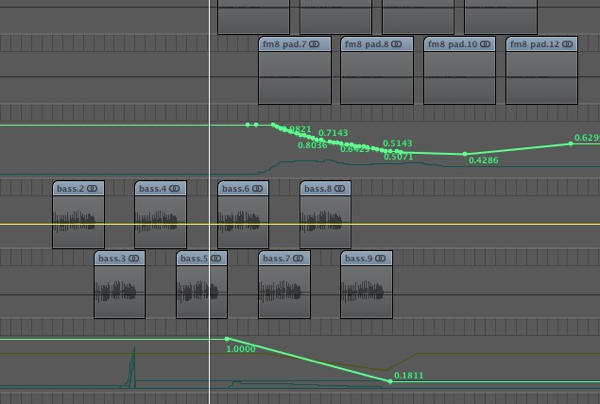 Lots of things were faded using low an high pass filters here but possibly the best example is the bass and pad sounds. These fade out together as the breakdown develops.

The bass and pads are filtered slowly.

A few of the Fabfilter Simplons used here.

If you plan on creating an epic feel in your breaks, your going to need reverb and plenty of it. While your at it load up a delay plug-in or two, cause you'll need them too! 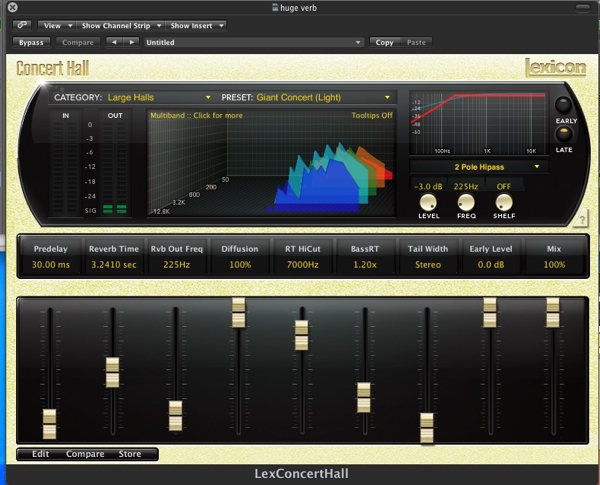 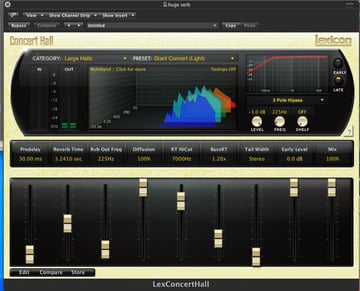 Lexicon reverb was used in this mix.

Automating large amounts of reverb at the end of phrases or sections is the perfect way to paper over any cracks and seamlessly join elements thats are leaving or entering the mix. For an example I've isolated the main drum loop going out just before the breakdown kicks in. A healthy amount of Lexicon verb was used here.

The reverb level is automated.

The drum loop is treated to some reverb.

As well as using effects processors you can include actual effects samples. Again these are excellent for smoothing transition but they can also create tension and impact. Using risers and soft crashes throughout your breakdown will actually give the listener a sense of timing and allow them to keep track of where they are at, in absence of the main drum track.

To show you an example I have isolated the two main effects samples used in the centre of the break. Following that there is an audio clip of the whole 'mini project'.

The effects samples in isolation.

Here is the whole track to put things in context.