There’s a long road of learning ahead of beginning computer musicians and home studio engineers as they begin to merge what they’ve been taught about music and song structure with the way digital audio workstations handle those same things. When you’re playing music with yourself or even other musicians, you can change the tempo or time signature as you go, but it’s a little more complicated to get your computer to follow along. Here’s how to make sure it does in Reason 4.

Fire up Reason and create a new project. I’m going to open a Thor and a Redrum and throw a reverb unit on the mixer. It’s not necessary to do this to learn the technique, but it’s better to hear the changes as they’re occurring so you get a grip on the tools you’re learning about. 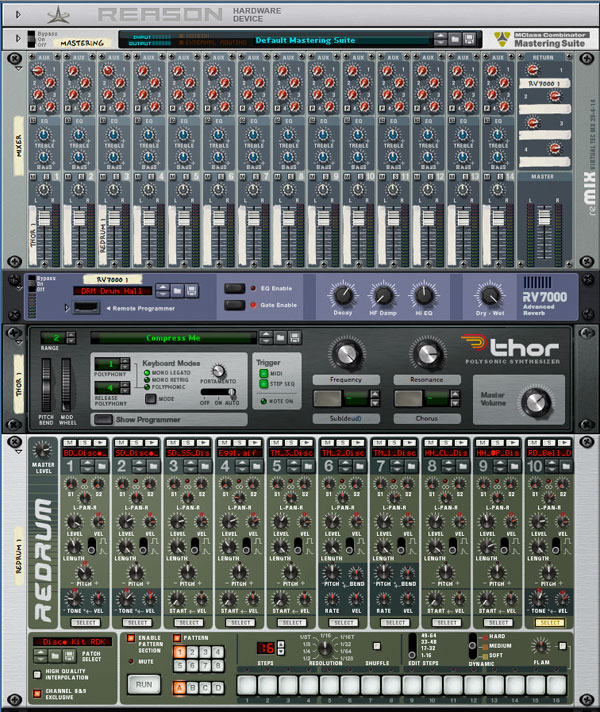 Switch into Edit Mode, or turn on your MIDI controller, and record a few clips that you can line up in the sequencer repeatedly as you audition tempo changes. There doesn’t need to be much; a section as long as one bar is fine.

Try and make it somewhat pleasant to listen to because you’ll be hearing this for a while as you explore tempo and time signature automation.

The first thing to do is set your baseline tempo. Baseline tempo is the tempo that will Reason will apply where no modifying automation data has been set. To save yourself a lot of work and clip drawing, this should be the tempo that the majority of the song takes place in.

To do this, locate the tempo setting on the Transport bar, in between the click track settings and the transport locators. You can use the arrows next to the number to change the value, or you can click the tempo number and type a new one in.

In the list of tracks in your sequencer window, the top should always be the Transport track. Locate this and use the arrow on the right of it to expand it. There’s not really anything to be revealed by expanding it yet, but we’re about to change that. 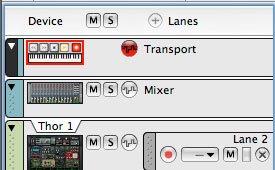 Right click on the Transport track and click on the menu option Parameter Automation. When the dialogue box opens up, check both Time Signature and Tempo, and press OK.

Now, when expanded, the Transport track has to lanes available for editing:

Draw a clip with the Pencil tool in the part of the song where you want to modify the tempo. I recommend having to Snap to Grid enabled with the snap setting on Bar, to ensure your clips begin and end on the bar.

You can select the clip and press Enter or Return to edit the tempo with the Pencil tool in Arrange mode, but you’ll find this method fairly inaccurate to work with. I recommend flipping over to Edit mode and double-clicking on the clip there to edit it.

Once in Edit mode you can still draw crazy tempo patterns with the pencil tool like so:

Of course these are rarely practical. In most instances, you’ll want to set the tempo for the duration of the clip. Matching clips to sections of the song is also handy later if you chose to move that entire section — all you’ll need to do is move the tempo clip rather than program a new one in the section’s new location.

Click on the dot (you can tell which dot is selected as it is totally black, rather than white with a black outline) in order to change its value. On the toolbar above the edit window, there’s a setting labeled Value. This is the value of the automation point you have selected, and this allows you to set your tempo precisely — of course, tempo needs to be precise, so drawing and dragging is rarely suitable.

The default time signature is 4/4, and the vast majority of modern songs are in this time signature. I’m going to leave the project setting as is and move on to automation.

Time signature automation also works on clips, but differs slightly in that there’s no drawing done within the clip. Each clip represents one time signature change. Drop a clip in the location you’d like to see a change:

You’ll find that you can’t double click on this clip to edit it. Whether you’re in Edit mode or Arrange mode, you’ll see a dropdown menu instead. It has several preset common time signatures in it, and an “Other” option. The signature I want is not in the common list, so I’m going to click on Other and set my own.

Click OK when finished, and it’s set — wherever I place that clip, the song will change to 7/8 time.