When composing a song, the obvious place to focus on is the melody. In fact, I wrote a series of tutorials providing tips for composing melodies recently, which you may find useful if you're struggling with this part of song writing (Part 1, Part 2, Part 3).

Whilst a catchy melody is arguably the single most important element to get right, it's also seriously beneficial to pay close attention to the bass line too. Musicians and composers have been using bass lines to spice up their scores for centuries, across all genres of music from classical to blues, jazz to pop.

In this tutorial you'll pick up some tips, tricks and ideas to help you improve your compositions by creating better bass lines.

First of all you need to understand some of the basics about your song before you can write a good bass line. This means, you should first identify the following;

Without knowing the above two answers, you'll just be 'fumbling' around on your instrument trying to 'pitch' tones which appear to match or sound good to accompany the melody and/or backing track.

This works fine for some people, completely naturally as they're able to do this by ear. But for the purposes of providing you actionable tips to spice up your bass lines, I'm going to assume you're able to determine the answers to the above questions first.

In this tutorial example, we'll keep things simple, with a demo song in the key of C Major, and the opening chords are:  C major, G major, C major, F major.

Once we know the key signature and chord sequence of the song, we're immediately able to write our first basic bass line. How? Simply take the 'root' of each chord and play this for the bass line.

For example, the chord C Major has a root of 'C', so we play a 'C' bass note. The G Major chord has a root of 'G', so the bass line follows with a 'G' note. And so on. Here's how this really basic bass line would sound with our example song.

2. Use Other Notes from within the Chord

Using the root of a chord will provide the most 'stable' sound, and it's often good to open and end a song with the root. However, sticking to this technique all the way through a song will risk your composition sounding simplistic or a little dull. The next thing to try therefore is to replace some of the root bass notes with a different note from the chord being played.

For example, in our example, the chord sequence is:  C, G, C, F.  We'll keep the first bass note as the root ('C'), but we'll try a different bass note for the second chord G major. Here's an example of how it sounds with a 'B' bass note underpinning the G Major chord in bar 2.

Could you hear the difference? Sounds pretty good, right?  We could instead try it with the other note of the G Major triad - 'D' - as the bass note, again in bar 2.

Notice how different this makes things sound? Both versions sound good, because both deploy the same basic principle of the bass note using tones from within the overall chord being played in the backing track.

We could follow the same principle, on the 3rd chord (C major). Lets replace the root bass note ('C') with an 'E' (because E is one of the notes of the basic C Major chord - C, E and G).

Again, this adds another element of interest to the song now that the bass line isn't following the standard root note for each chord.

What you'll also notice is that the base note is actually now forming a pattern, going up the scale note by note.  This is the beginnings of what could be termed 'walking the bass'. More on this later.

So, if we continue to take this further, we're able to get quite creative, exchanging the root bass note of our simple chords C, F, G and A minor, to make a half-decent bass line with just this one technique.

Here's how the new bass line sounds in our example song, with added drums and piano accompaniment. Notice how at 0:20 the F chord, uses a bass note of 'A' followed by the G chord which has a bass note of 'B'. This creates a rather interesting sound, especially when the bass then jumps down to an 'E' at 0:25.

Try this technique on your own bass lines, you'll be amazed at how different your song sounds just with a few strategic replacement notes from within the chord.

Using the above two techniques alone will create some real interest in your composition. However, it's now time to try and add something extra - 'embellishments'.  There are a few simple tricks you can employ when adding embellishments to a bass line.

Repeat the same note, adding a emphasis to the beat or rhythm of the music. This is often done on the last beat of a bar at its simplest level, or by several repeats of the same note throughout the bar.

Here's an example, using the song as before, but with a very obvious repeated bass note. This is rather exaggerated for the purposes of the tutorial, but you'll see what a difference it makes to the feel of the bass line.

Try adding more complex rhythms to your bass line to emphasis the main beat, or even provide some syncopation against the rest of the backing track / melody.

Simply play the same bass note an octave higher, or lower, to add another element of interest to the bass line, rather than staying on or repeating the same note.

If we take our example song, listen to how the bass line now utilise the above tips by repeating notes and hopping up and down the octaves using different patterns in the clip below.

For example, you might have in your song, a move from the C chord, to an F chord. To 'walk the bass' at a very simple level, you could start with a bass note of 'C', then whilst the rest of the backing accompaniment is still on the C chord, the bass walks up to 'D', then 'E', and finally onto the 'F' just as the chord changes to F major. We've walked up from C to F using the notes of the scale in between.

Depending on the sound you're wanting to achieve, you could even test notes which are not in the standard scale. For example, how about in the above example, using an 'D sharp' too.

Just for fun, I've added some of this technique to our example song below. It doesn't always 'work', but you can at least listen to the example to get a better understand of the concept, for when to deploy it (and when not to).

Note: There's a more detailed explanation of the 'walking the bass' in Wikipedia.

My final tip is to simply enjoy playing around with your bass line. Don't be tempted to just choose the root note all the time. Remember that the bass line can drastically affect the overall sound of your song, so it's not something to just throw together without too much thought or effort.

Keep trying out new notes, adding embellishments and even vary the bass at different parts in your piece. Try use combinations of tricks in this tutorial to add a real boost to your bass lines!

Here's a final adaptation of our example tutorial song. Hopefully this shows with just a few simple techniques, how a 'boring' set of chords such as C, F, G, A minor, can be spiced up to something quite different - mainly because of the choice of bass notes (and some Apple La-La-La vocal Loops). 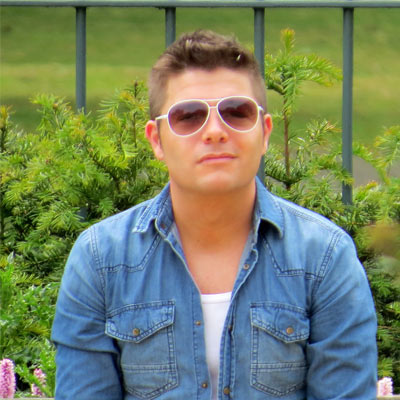 Jon Smith
Jon was introduced to the piano at the age of eight and was immediately in love. Whilst following a fairly classical route in England, UK of the Royal Schools of Music Grades 1 to 8 for piano, Jon's real passion was for playing by ear, composing, and 'jamming' along with other musicians or simply to recorded songs. Now teaching students how to learn and enjoy playing piano, by understanding musical techniques rather than simply sight-reading musical scores.
Weekly email summary