Bus processing is a great way to immediately lift any group of instruments, giving them more presence, clarity and punch. In this tutorial I’ll show you how a simple chain of processors can help to enhance even the most basic drum mix.

We’ll cover buss compression, corrective and creative equalisation, saturation, transient design and finally limiting. This combination of processors should give you a good idea of where to start when constructing similar channel strips.

I’ve decided to use a raw multi-track recording of a drum session I’m working on in another project here. This is a small section of a session that has been very basically mixed with zero processing applied to the stems.

Of course in a real world situation I would process each separate drum part individually but I wanted to use the raw recording here to show you how far we can get with bus processing alone.

Below you can hear the original recording with decent relative levels set and no grouping taking place. Although it’s well recorded and tight, at this point it all sounds a little weak and un-tamed.

In the following steps I’ll use various plug-ins to attack each issue as well as we can with bus processing. Don’t worry if you don't have the exact plug-ins or application I’m using. You should be able to follow this using any digital audio workstation and its stock plug-ins.

The first thing I wanted to do here was to tame some of the louder transients such as the crashes and cymbals in the mix. I also wanted to bring the general level of all the drum sounds in the mixer closer together. What I needed to do was reduce the overall dynamic range.

The obvious tool for this job is a compressor. One of my favourite compressors for any drum work is the classic 1176. There are a few emulations of this awesome bit of kit out there now but I opted for the Waves version.

Some people like to smash the hell out of their drum mixes at this stage but when performing any bus compression I like to take the same route as when mastering a track, for me transparency is key here.

This means low ratios, longer attack and release times than you would use in the mixing stage and a maximum of around 3 dB of gain reduction. Of course none of these are hard and fast rules, they are simply a guideline if you like to treat your instruments without them actually sounding too compressed.

The compressor adds cohesion and uniformity

I tend to like the sound of a vintage emulation when treating acoustic drums, it can add a certain amount of character to the mix but if you prefer things even cleaner go for a purely digital model. Often your DAW will feature a clean digital model amongst it’s stock plug-ins.

Even with this single processor we’ve managed to reign in some of the more aggressive peaks and introduce a little punch and extra volume, without destroying the dynamic feel of the performance. Next up… EQ.

So without treating each individual part I felt that a small amount of corrective EQ was in order. Again when treating an entire bus I like to keep things subtle, this avoids over coloration of the sound or effecting too many parts of the mix at once.

As you can see from the screenshot or the EQ I used, low Q points were used and no more than about 3 dB of gain or reduction in any area. I simply rolled of the very low frequencies, reduced the low mids and boosted the highs for some ‘air’.

After this I felt that the lows were still lacking I decided to use a graphical EQ from SPL called the Bass Ranger to help remedy the issue. I added a small amount of the lower three bands. I like my drums pretty warm and rich in the low end but if you feel I went to far here you could always hold back in this area. 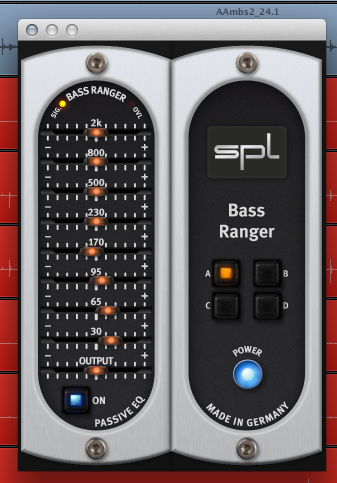 Some extra low end from SPL

The two EQs were working nicely and I felt it was time to move on to some more work on the dynamics and harmonics.

The two EQs doing their thing

Transient Design is quite simply an amazing tool for processing drums. Be it single hits or your entire drum group this is a tool you should have on your system. With the capability to actually alter the attack and sustain phases of the transients within your audio these simple plug-ins have a million uses.

You can give snares more punch, add room sound to a tom or reduce the amount of reverb and delay in a signal, all with just a couple of simple controls. There are a few plug-ins out there to choose from but my favourite has to be the original SPL design.

In this case I used a touch of attack to add some snap to every transient and actually reduced the sustain control. When used across a whole bus in this way reducing the sustain in this way almost has a gating effect and will actually tidy up the overall sound by reducing the room sound and sustain present ‘in between’ hits. 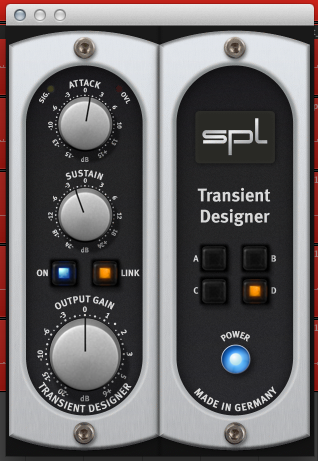 The designer is added to the mix

My last couple of moves here were adding a saturator and a limiter. Saturation is a nice tool for giving your drum group a little more attitude and giving the whole thing a slightly more analog feel.

I used the URS ‘Saturation’ plug-in that features a few really usable models. I opted for a tape based pre-set and dialled a good dose of the effect in. Extra harmonics are added and a slight further reduction in dynamic range but nothing too heavy.

Finally to put a virtual cap on the whole thing I used Fabfilter’s Pro-L Limiter to ensure there were no overs. I also added a small amount of input gain to give the whole group a final boost. It was easy to see that with only around 2 dB or gain reduction the group had kept a large amount of it’s original dynamics.

Although we would normally mix a drum part with a little more finesse before treating it, hopefully this has given you some idea of what can be done to intensify a simple drum recording. This is not an exact science and you shouldn't blindly follow this method for every track but it should get you thinking in the right way and help you get started with your own drum tracks.

The final group / strip in action

The drum group treated with saturation and limiting