In the world of sound design and music for media, there are two basic classifications of sound: diegetic and non-diegetic. Diegitic sound or music occurs within the story, i.e. a piano being played on screen, a boom-box playing a hip-hop beat. Non-diegetic sound occurs outside of the world of the story, and is perceived only by the audience, rather than the story's characters.

With this in mind, this tutorial will look at creating a transition sound-effect in Logic Audio. These sounds can assist in helping the audience change focus from one scene to another, from one virtual space to another, etc. These techniques can also be used in music, where one might want interesting transition between musical sections.

The transition we'll create in this tutorial I affectionately call 'The Matrix' transition, because it is similar to some of the sound-effects used in the film of the same name. These types of transitions can be especially useful for cyber-punk, futuristic or other technology-centric realms.

This tutorial takes place in Logic Pro, but the principles would be the same for any DAW.

Interestingly enough, the fundamental sound used in creating this effect is completely analog and organic: an orchestral chime tree. I found a nice recording of orchestral chimes at Freesound, here. There are other good quality chimes samples in numerous libraries, including the default library for Logic Audio's EXS24 sampler. Since that sample is copyrighted, I wont be using it for this tutorial, but feel free to experiment with a variety of chimes samples for this technique. You might find that combining two or more types of chimes samples gives more character to your final sound.

First we will add our chime sound to an audio track. We will then create a copy of this sound and put it on a second track. To do this, hold the OPTION key while clicking and dragging the region to another track. By selecting the second region and clicking CONTROL+F, we can create a new audio file from this region. We give it a unique name, and now we have two identical copies of the file for individual treatment.

This particular sample is a little full in the mid range, so on the first track we'll use an EQ to remove some of the midrange and give just a little boost to the high end. 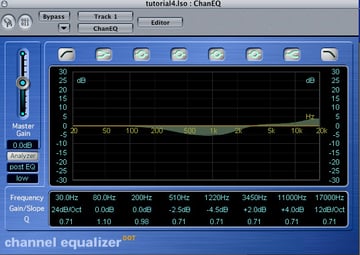 Next we'll add just a touch of the Chorus effect to the sound. When used sparingly, Chorus is a great way to add body to a sound. It is particularly useful when creating 'washy' transitions such as this one. 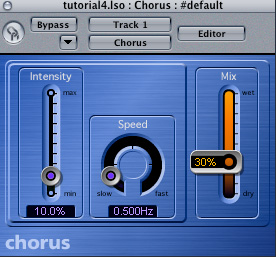 The last thing I'll do for this particular region is to use Logic's Exciter plug-in to add some more high-end harmonics to the sound. The effect is subtle, and would be lost with MP3 encoding, but the added high-end will give more character to our final product. 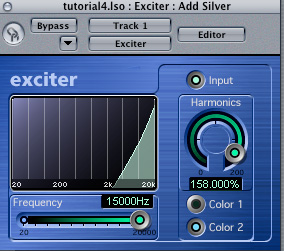 The first layer of our sound is complete, so we'll bounce it to a new track using Logic's Bounce feature. We'll check the box to 'Add to Audio window', so that we can easily drag this new file to its own track.

Once the bounce is complete, we'll mute the original track, drag the newly bounced file from the Audio window to its own track, then open up the file in Logic's waveform editor by double-clicking the region. While inside the waveform editor, we'll use Logic's Reverse function to reverse the audio file. Keep in mind that this function is destructive! As a precaution, you can use the 'Save A Copy As...' or 'Create Backup' feature to make a duplicate of the original bounced file, should you want to revert to it. 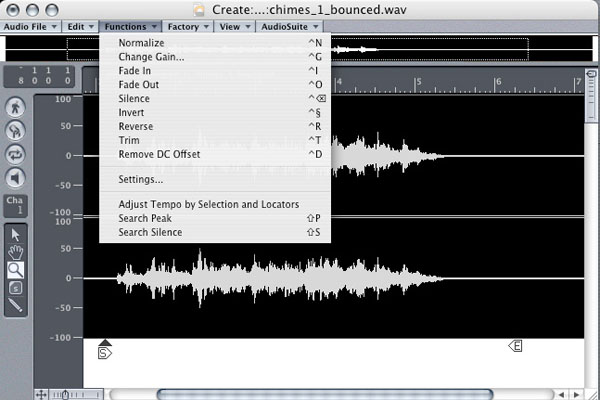 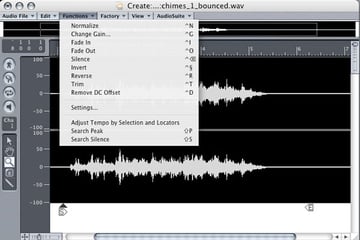 We now have a reversed and processed version of our original chime sound that works really well on its own. To give just a bit more character to the sound, however, let's use a few more tricks. First, mute the reversed track from above.

On the duplicate chime track, double-click the region and while in the waveform editor, select Logic's Time and Pitch Machine from the Factory menu. From here, we'll pitch-shift the file by -300%.

On playing back the pitch-shifted version, you'll probably hear some strange artifacts. This is OK. We're going to use an EQ to roll-off the high-frequencies of this layer, so they're not battling with the nice sizzle and sparkle we created in the steps above.

I used a 12dB per-Octave, high-cut filter at 3000Hz to reduce the high-frequencies of this particular sound. 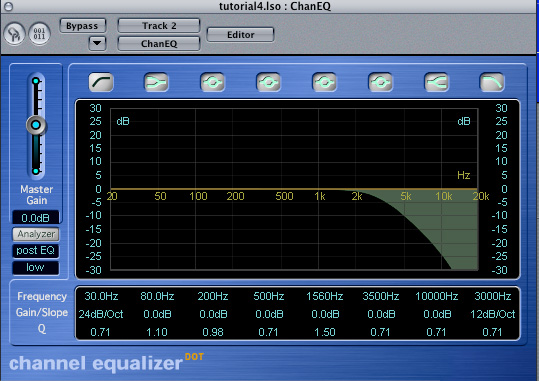 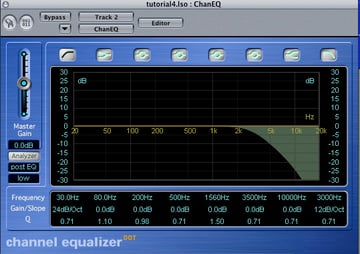 One more step on the second track before we bounce. We'll apply Logic's EnVerb plugin, using the 'Fast Reverse Verb' preset. This reverb can really give an otherworldly feel to your sounds, and is one of my favorites for creating transitions.

Once you've got this reverb set up, we'll repeat Step 5 above. Bounce the track, add it to the audio window, and add it to a new track. Double-click the region and reverse it using Logic's waveform editor. You may want to shuffle the two regions around so that the layers compliment one another to your liking. Perhaps you want the low-end to come in slightly before the high end, etc. We'll also trim the end of each region so that they have a sharp cutoff.

One more bounce of our arranged mix before the final touches. Again, we repeat Step 5, this time bouncing both of our low-end and high-end versions of the transition sound. Bounce, add to the audio window, add to a new track, double-click and reverse the file.

The final touch will be to apply a reverb to the final-arranged-reversed-version of the mix. I'm using Logic's Space Designer reverb, but feel free to use any reverb that provides a nice decay and adds character to the sound.

We'll do one final bounce of the mix, add it to our arrange window and reverse it in the waveform editor. Crop off any unnecessary silence at the head and tail of the region and we're done!