If you are a Reason user and haven't updated to version 5 yet then you really need to. There are loads of great updated features but Kong alone is worth the upgrade price tag. I've made no secret of the fact that I'm a big fan of Kong. In fact I'd go as far as saying it's one of the best virtual drum machines available at the minute.

I've been showing some of my students how to build there own kits using a combination of Analog modelling and Sampling modules. i thought I'd share this technique with you and demonstrate how I would go about building a classic analog kit. Think 909 and 808 and you'll be on more or less the right lines!

Before we get into any programming you'll need to load a Kong into your rack and get it totally wiped. To do this right click to bring up the instrument list and select Kong. Once loaded right click again and select "Initialise patch". All done, sorted... we are now good to go. 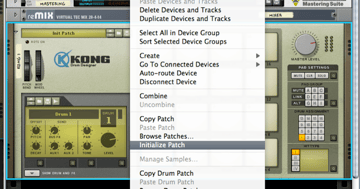 Step 2: Laying the Foundations - The Kick and Snare

Realistically the most important part of any electronic kit is the Kick and Snare. Unless you are building a percussion or ambient kit you'll really want to get this part right. With this in mind I tend to do this section first.

As we are building an analog style kit here I have used the dedicated 'Synth Kick' and 'Synth Snare' Analog modelling generators. Even using their default settings these modules produce incredibly accurate analog drum sounds and once you get tweaking the controls you'll realise how powerful these are.

For the kick sound I simply decreased the decay to make everything a little tighter, increased the amount of noised for some extra edge and also increased the click at the start of the sound. These alterations brought our kick sound closer to that of a TR-909 than and 808. Very cool. 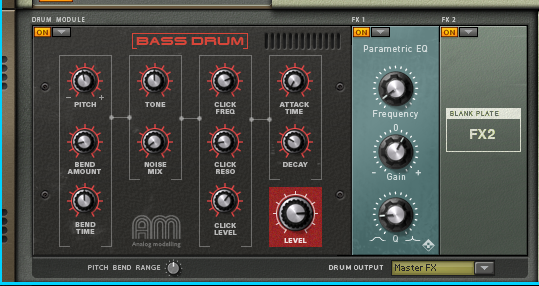 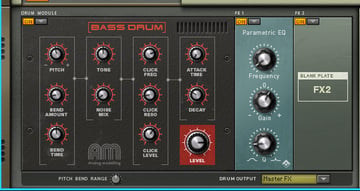 The Kick drum with a small amount of low end EQ

The snare drum also only needed minor tweaks to get it closer to what I was after. More release, more noise and generally brighter settings were used to get a distinctive analog, dance snare sound. You can hear a very basic beat below using the two sounds... and remember the beat is only to demonstrate the sounds. ;)

The kick and snare play back in a basic pattern

Next up I wanted to add some analog style toms to the kit. I used the Synth Tom generator and copied onto two pads. Of course you may want more toms in your kit, if you do then simply install more generators across your pads.

Once these were installed and ready to go I programmed the sound I wanted on the first instance of the Tom and then copied the parameters manually into the second one. I then pitched up the second tom so I had the equivalent of a low and high tom sound. If you were working with a lot of separate tom sounds you could save the patch and re-load it to the next pad to speed things up here.

One of the Tom generators used.

Once my toms were ready I panned them slightly apart to create some space and added them to my sequence. You can hear the results below...

The pattern with (the very sloppily recorded) toms included.

Next I wanted to recreate some classic drum machine high hats. The Synth high hat generator is capable of producing a wide range of hat sounds, from tight closed hats to trashy open varieties. I put this generator on two pads and got to work. 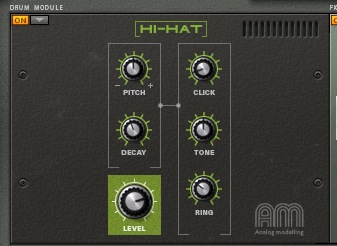 Programming the sounds here was very straight forward but I still wanted to create an authentic relationship between these sounds and this meant making a mute group. By clicking the magnifying glass icon next to the 'Pad group' section on the right of Kong's interface, a simple display is brought up across all the pads. You can now choose which pads are in your mute group.

By selecting both high hat pads we have created the group. Now only one will play at a time. So when our open hat is ringing out the closed hat will stop it from playing. This gives us a semi realistic hi hat sound and keeps things nice and clean. You can hear the result below...

Our mute group is created

The new high hat sounds in the mix

So at this point the pattern was more or less done and remember everything you are hearing up until this point is produced by pure synthesis with no samples in sight! All I wanted now was a decent crash and a few more decorative effect based elements. For these I would need to reach for a sampler.

With a Nano-Sampler generator loaded I chose two crash samples to use and loaded them into two of its four sample slots. These were then spanned and triggered by two pads. Once mixed some delay and filtering was added to add some extra space and definition. You can hear the sequence with the crashes below... 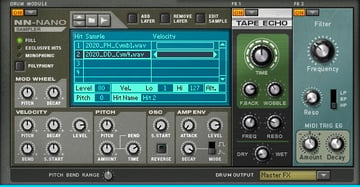 The link group is created

The mixed crash sound is added to the pattern

Two further samplers were then put into action and few effects samples were loaded. One of the effects was sequenced throughout the drum pattern and another (a longer reverse effect) placed only a few times throughout. These sample based sounds don't take a huge amount of programming to get right and only a few tweaks to attack, decay and tone were performed here.

Another Nano sampler with some FX samples loaded

The effects samples in the mix

The whole thing is tied up by a master compressor placed across the entire drum mix, this adds a little cohesion and punch to the whole kit. When you have completed your kit you can save it for later use. I have included the Logic project so you can load the whole thing up and then attempt your own custom kit. 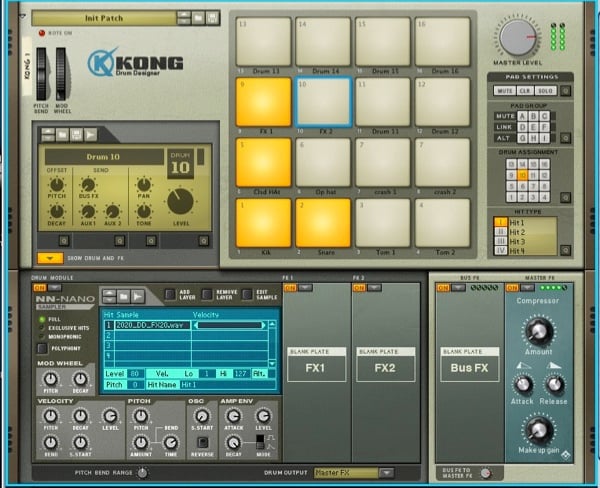 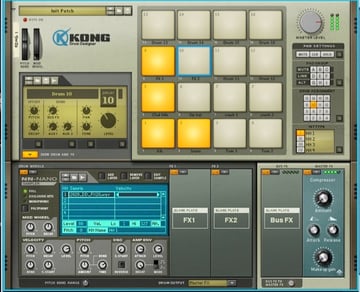 The final kit in action

This whole kit being used and fed through the final compressor