Sculpture is a unique instrument to Logic in that it is something called a 'component modeling synth'. Where Logic's other synths are the more standard FM and additive synth types, Sculpture tries to make a virtual model of an actual acoustic instrument which mimics that instrument's physical properties.

In this and a following tutorial, we will look at how this unusual synth operates and how we can manipulate its parameters to create a realistic electric bass sound. 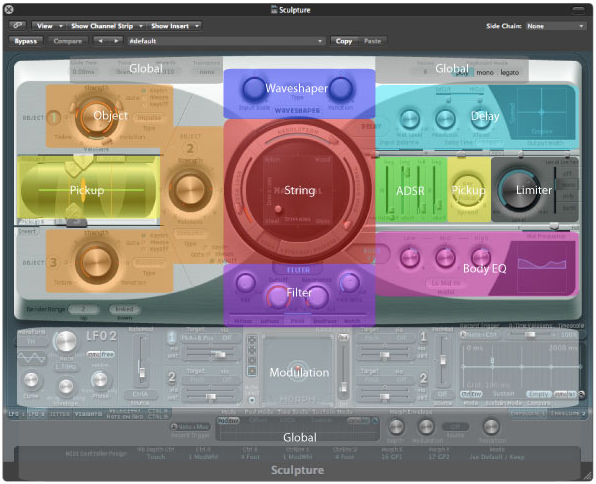 First, some basic background information is a good place to start as Sculpture has some rather unique parameters that require some explanation. In order of signal flow, they are: 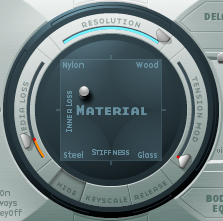 Detail of the object and pickup sections.

Detail of the body EQ.

Since we are trying to model an electric bass, we need to think about how an actual electric bass operates and then dial in those physical attributes into the respective parameters of Sculpture.

The first thing to think about is string type. In the string section XY table you can see options between wood, glass, nylon and steel. An electric bass obviously uses steel strings, so moving the puck to somewhere in the lower left of the table is what we want to do here.

In this section it is also important to make sure the 'media loss' slider at the left is turned low if not off as high values will make your sound cut off unnaturally short.

The next thing to think about is how the string is going to be played. Here, I have turned on Object 1 and selected 'Pick' from the drop down menu which mimics a fingered or plucked excitation of the string.

Moving on to the pickup section, the green line (you can right click it to activate string animation) represents the string. The orange oval under the number 1 represents the action of Object 1 (the plucking of the string) and has varying levels of opacity depending on the 'strength' dialed in. The object has a stronger effect on the string the closer to the middle and has a less pronounced effect off to the side. This makes sense as playing a string close to a pressed down fret will vibrate far less than one played towards the more open region.

The A and B sliders represent the pickups (electromagnetic fields which capture the string's vibrations). The pickups create more bass around the middle of the string and become more overtone rich the further to the side you place them. This mimics the real world in that the more open portion of the string will give a smoother and more powerful sound while the edges will create more harmonics. To create a bass with a single pickup, you simply need to place them in the exact same position (and make sure the 'invert' button is not turned on).

Finally, for our basic sound we want to have little to no attack and a very short release as well. I like to put just a bit of attack on in order to trigger the string while it is still vibrating as discussed in the ADSR section above. I just dial the release to taste, but always keep it short.

After going back and playing around with some of the settings, I've moved the string more to the nylon side of things, kept the media loss low, cranked up the object strength, randomly adjusted the timbre and variation settings to taste and locked both pickups and the object sliders to the lowest side of the string. I've turned everything else off and upped the number of voices to 16 in the upper right.

In the next tutorial we'll look some of the other sections of Sculpture in order to make our bass sound more varied, expressive and natural.