In the first part of this brief series we discussed the various parameters of the Sculpture interface and then went on to create a decently realistic, although basic, bass sound in Logic's Sculpture synthesizer. In this followup, we are going to expand on the sound we left off on while exploring some of the more sophisticated parameters Sculpture has to offer.

Where We Left Off

This is how Sculpture looked when we left it:

This is how Sculpture sounded when we left it:

The first thing I wanted to do was to add some more physically modeled conditions to the string in order to make a more dynamic and realistic string sound. Since a real guitar string will interact with its surrounding environment in some way after it has been initially disturbed (hit the fretboard, a nearby string or finger, etc.), Sculpture provides an ample supply of virtual outside factors ('Object 2' and 'Object 3') that can act on the string as well.

After some experimentation, I chose the 'Bound' option from the 'Type' pulldown menu as the second object to act on the bass string. After checking out the Logic Manual to see just what 'Bound' actually means as a type of disturbance condition, it makes sense that it would sound about right for what I am going for in my bass.

The 'Strength' control knob (having the most pronounced effect) emulates the distance the bounding object (virtual fretboard) is from the string at rest. The left 'Timbre' slider emulates the steepness of the bounding object (0 is parallel to the string with an increasing angle as the value is increased), while the right 'Variation' slider controls the amount of string reflection.

I've also moved the 'Object 2' slider to about the center of the string so it acts at the peak of the string's vibration cycle as that is where the fret would mostly be interacting with the string in real life.

After playing around a bit, I decided on the values shown above.

The sound as it is now with the added release sounds of the bounding object.

As it is, the release sound is a little strong. We can reduce it by dampening the sound with 'Object 3'.

Here I have set the disturbance type to damp which will dampen both 'Object 1' and 'Object 2'. The 'Strength' knob in this instance controls the strength of the dampening. The 'Timbre' slider simply changes the sound characteristics while the 'Variation' slider controls the amount of string that is dampened.

Once again, I have placed the 'Object 3' slider close to the center of the string to act near the point of most vibration. 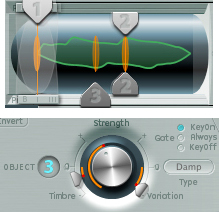 The bass after dampening:

The next thing I want to look at is the modulation section at the bottom of Sculpture's interface. I generally always map my modulations to react in someway to the velocity so I will immediately click on the 'Velocity/Note on RND' tab in the bottom left to open up four possible modulators.

On the left side there are two velocity based modulators; the numbers turn them on and off, the sliders adjust intensity as do the velocity curves and the 'Target' drop down menus select the parameters (almost 30 to choose from) the velocity will act on.

To the right there are two random parameters both of which send out a random value with each note on event. Once again the numbers toggle between on and off, the pull down menus select the destination and the sliders adjust intensity.

This makes sense in this instance as I have selected 'Object 1 Timbre' and 'String Innerloss' as the parameters to modulate. I found that as I increase the timbre, the sound thins out. So to thicken the sound as velocities increase, the negative value was necessary.

The 'Innerloss' parameter selects the material type of the string. I have set the puck mostly to nylon (found in the center of the Sculpture interface), but want the twang of a steel string to come out at higher velocities. Once again, to achieve this, a negative value was needed to invert the modulation. For the 'Note on RND' section, I've chosen to modulate the 'String Stiffness' and 'Pitch'.

The 'Velocity' and 'Random' modulation parameters on the left. The material puck on the right showing 'Innerloss' on the Y axis.

The bass after modulation.

In creating a 'real bass' subtle amounts of modulation go a long way. I've gone ahead and added some slight vibrato and jitter to the sound to add some continual, random pitch and object condition variation.

The 'Vibrato' and 'Jitter' parameters.

The bass as it sounds now:

Although the Morph XY pad and envelope modulators in the center and right side of the modulation section are interesting and fairly unique, they would demand more explanation than is within the scope of this tutorial and are more suited for changing a sound over long periods of time.

As such, the next thing I want to look at is the 'Body EQ'. This is a unique parameter to Sculpture as well in that it takes a precise EQ profile of various instruments and then imparts that profile onto the sound at hand.

Here, I have chosen the Acoustic Guitar 1 model and set the parameters to taste.

The final step I want to take here is to place a match EQ on the bass sound. The match EQ is somewhat similar to the body EQ in Sculpture in that it produces a very intricate EQ model. It does so by storing the average frequency spectrum of any audio file and then applies that spectrum profile to any other audio signal so that the frequencies match the profile of the original signal.

In this instance, I have imported a mixed live bass recording and applied the differences to the Sculpture bass.

A red frequency response will begin to jump around on the match EQ and will more or less stop moving once the audio has been fully analyzed. Once the audio profile has been analyzed, I stopped playback, soloed the sculpture bass, hit the 'Current' button and hit play until the frequencies of Sculpture were analyzed.

After this is done, hitting the 'Material' button will give you the EQ profile necessary to match that of the original audio. The 'Smoothing' slider determines how much detail is in the resulting profile, while the 'Apply' slider determines the intensity of the peaks and troughs.

This quick trick is really great in that it allows you to get fairly good results in the matter of seconds, no matter what material you are working with - even entire mixes.

The final EQ settings which create a fuller and richer sound. Subtle settings, once again, are usually best.

Of course you can go on to add as many effects as you want, really the sky is the limit. Distortion and filters can do wonders (especially when modulating their parameters), although still my credo is subtlety at every step.

I like to think of it (and most artistic ventures - and this is probably cliche) as cooking a dish where too much of one spice makes things distracting and taste only like that one spice, but when everything works in balance and in subtle ways, you can experience the nuances of everything working together in a tasteful and productive way.