The idea of using delays or loops in ambient music goes back over 50 years to the time of the BBC Radiophonic Workshop, where tape loops were used to add special effects. Musical pioneers such as Steve Reich and Karlheinz Stockhausen continued experimenting with tape loops, and the technique became even more popular following the work of Brian Eno and Robert Fripp in the 1970's.

Today, we rarely see musicians using actual tape loops, but we have numerous digital tools at our disposal that allow us the freedom to experiment with techniques passed on from modern ambient composers. In this tutorial, we'll look at one way to create an ambient music-scape using Logic's Delay Designer as a 'tape loop'.

For the purposes of this tutorial, we'll keep our setup relatively simple. First, we'll create 4 new Software Instrument tracks in the Arrange window. 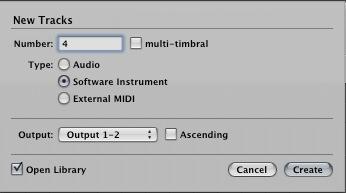 For the first track, I'm going to use the ES E - Logic's Ensemble synthesizer. This unit emulates some of the classic string synthesizers of the 70's and 80's, and will provide a nice foundation for our piece. I've chosen to use the simple 'Analog Pad' preset for this instance.

I will next add one instance of Logic's Delay Designer plugin into the first Insert slot of Track 1. 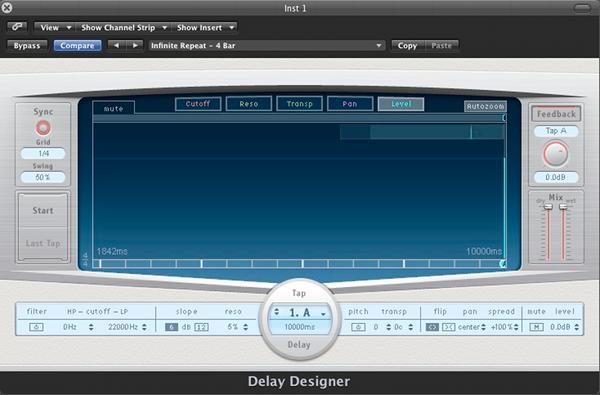 We'll now record a very simply melodic line, which will last most of the duration of the 10 second loop. Here's the line I've recorded.

Now that we have a foundation for our piece, we'll set up the following 3 Tracks in similar fashion, with one Software Instrument per channel, and one instance of Delay Designer for each. My settings are as follows: 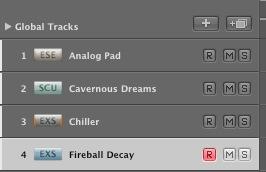 For each of the four tracks above, I'll now record a very simple line - some a bit more melodic than others. I've recorded them below while bypassing the Delay Designer plugin on each track, so you can hear the simplicity of each line.

You can hear that what we have so far seems fairly plain and unexciting. However, once we arrange the recordings along the timeline, and re-activate the Delay Designer Plugins for each, magical things begin to occur!

The recording below is 30 measures of the 4 tracks pictured above, with the Delay Designer plugin for each track continually cycling the material fed into it during the initial phrase. Notice how, over time, the tracks seem to fall in and out of sync, how one phrase can reinforce another during one cycle, and interrupt or undermine it in another cycle.

The above material, while interesting, is a bit unrefined, so we'll do a quick mix pass, as well as add some reverb and EQ to smooth out the final product.

While the process of working with long delay lines can seem relatively simple, with a little effort and forethought, you can create compelling ambient soundscapes with ease and grace. Additional delay and reverb plugins per-channel can also aid in creating more mood and atmosphere. For more complexity and alteration over time, you might even explore automation of some of the delay parameters.

If you've enjoyed working with these tools, there are several other interesting plugins and hardware devices on the market that can provide even more fun and flexibility, including the Line 6 hardware delay pedals, Expert Sleepers Augustus Loop Plugin, and more.