In a music world where less and less people are bothering to learn to read and write “proper” notation, more easily grasped formats such as tablature are very popular—particularly in popular music where the nuance of rhythm can be derived from feel and instinct more easily than, say, classical. When composing in Logic, you can provide your guitarists with guitar tab instead of notation if they can’t read it. Here’s how.

Create a software instrument track. Assign an instrument to it (for this purpose it’ll probably be a guitar). 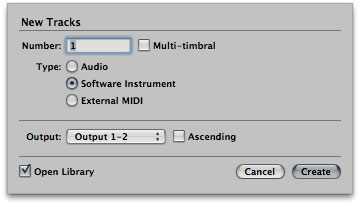 Head over to the Piano Roll tab and record or pencil in your music. I’ve mashed a few keys using the on-screen keyboard (push Caps Lock to bring it up) for the sake of the tutorial — don’t bother trying to play the resulting tab, it’s useless!

Once you’ve got some notes filling up your software instrument track, switch tabs to Score. Here you can see — and even continue to pencil in — the music in notation: 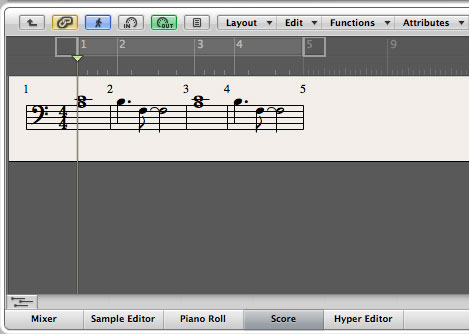 While you’re on the Score tab, your inspector (top left of the Arrange window) will change. It should look something like this:

Where it says Style, click and hold until a menu comes up:

There are several guitar options there. The selection you make really depends on the way you like to work, the people you’re giving the notation to and what their abilities are. The first option is simply Guitar, and the resulting output of this option is pure tab: 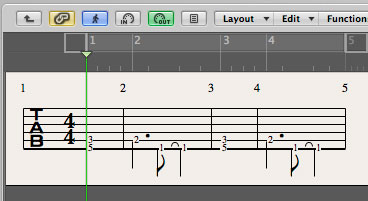 Guitar Mix, on the other hand, combines tab and score, making it a good choice when you’re unsure about the person’s abilities and preferences or musicians will be sharing sheets.

Guitar Mix 2 simply switches it so the tab is on the bottom and score is on the top.

Logic provides a bunch of tab notation symbols you can use. All good tabs mark up, in quite some detail, where the guitarist should take certain actions such as hammering on to the next note, bending the string, or sliding between frets. All of these options are present. Here’s how to use them.

First, locate the Part Box in the inspector strip. It looks like this:

If it’s not already selected, click on the chord box button that is selected in the image above. This will bring the tab parts up for selection. You should see something like this:

All of the necessities are there — hammer-on, pull-off, trill, slide, bend, slide and bend with direction indications, the list goes on. Click on the one you’d like to use, and head over to the Score area. Hold down Command to use your secondary tool — which is by default the pencil tool (if it’s not, that probably means you already know how to set it back!). Now, click on the note for which you want to indicate the specific technique, and then release Command.

I’ve used it to indicate a trill and a bend as can be seen here:

In the inspector strip, there’s a little box dedicated to properties for single notes — as opposed to the whole track and score. It looks like this:

Notice the channel parameter there. That’s for adjusting which MIDI Channel the note is on, and each note can be set to any of 16 settings.

Logic determines the placement of a note on the fretboard by the MIDI channel you’ve selected, so all you’ve got to do is change the channel until you’re happy with the placement. As each note of a certain pitch is only repeated a few times on the fretboard, most of the channels lead to the same placement, but that’s okay — we’re going to click on the channel number in the inspector and drag it, rather than trying each channel individually.

Unfortunately, Logic doesn’t tell you which channel will put the note on which fret, but it’s an easy if not tedious method.

You can also modify the channel by right-clicking on a note and using the menu provided.

Logic Pro isn’t the best guitar tab program in the world. There’s far, far superior dedicated software that we don’t cover here at Audiotuts+ for that task. But often, it’s inconvenient to do this job in another program, and you need to create tabs and scores on the fly from within your project. When that time comes, at least you know that it’s possible to do without excessive headaches!