If you're reading this tutorial, you're most likely wanting to up your production game, perhaps to a professional or—dare I say it—even a Hollywood level. So where better to aim than for the very top?

This tutorial will examine a simple percussive pattern, inspired by a recent Hans Zimmer score, and explain how to create a depth to this basic idea worthy of the big screen.

To demonstrate just how effective this treatment can be, we're going to start with two simple rhythms, loosely based on the rhythmical feel of the Hans Zimmer score for 2013 film "Man of Steel".

One can only imagine how difficult scoring this film must have been, after the iconic Superman theme John Williams left us humming for decades. Zimmer's approach for this soundtrack was unique, basing the most complex ideas in the score in rhythmical arrangement, to provide depth and basic humanity. For a film and score previously known for it's iconic melody, this was a bold and contemporary move.

We're going to look at two rhythmical patterns, both of which we will voice on floor toms / low toms. One pattern will be played softly, the other with much more aggression, to demonstrate diversity.

The key element of composition here is the idea of stacking drum/percussion voices. We're going to use the same rhythm over and over but build this up over multiple drum voices. This technique gives us simplicity but delivers a lot of power.

Note: This tutorial is based in Pro Tools but you can apply the concepts to any other DAW of choice.

In the real score for "Man of Steel", Hans Zimmer employed 10+ drummers to play simultaneously, so this is our virtual version, albeit scaled down a little!

Within the in-built mixer in BFD you can see I have routed the three tom channels to three mono tracks within Pro Tools, for mix balancing, instead of using a stereo output to process all three toms.

As you can see below, I've not touched any of the Overhead, Room or Ambience send levels on the toms. I want to keep the sound as organic as possible for processing at a later stage.

This really is as basic as you can get!

So with BFD all set up, it's now time to program the first pattern.

"Clicking-in" a drum pattern might seem like a particularly stagnant way of creating a dynamic drum sound. However it is a very quick, efficient and accurate way of getting the rhythm we require here.

As you can see above, the rhythm has been clicked in on a MIDI track to "feed" just one tom within BFD.

This is what we've got so far:

The part sounds okay. It's lifeless but, importantly, we've got the rhythm we need.

This is a simple case of copying and pasting the pattern to trigger the other two tom drums we have loaded into BFD.

The reason we are doing this is directly inspired by Hans Zimmer. This "layered" approach means we get the same pattern but played three times to create a sense of depth which is impossible to achieve with simply one voice.

So this is what three toms playing the same part now sounds like:

It's not bad and there is certainly more power with all three but it still sounds a little computerized.

By utilizing the Random feature within Pro Tools, we can shift the programmed notes slightly out of time to create natural "flamming"; a drumming term which means that each hit will be slightly delayed. This is going to create a much more natural flair to the part.

This is what the part now sounds like with a Random process of 15% added to our MIDI track:

We've got a lot more feeling in the playing now but as you have seen from the previous screenshots, we haven't touched any of the Velocity levels so far.

Remember, we want to create a very soft tom part. So what we've got so far is particularly over the top and lacking in any kind of variation.

By simply dragging the velocity levels at completely random points in the Velocity pane you can see below, we start to create the intricacies a human would inject into playing this part.

After which, this is what we've got:

This is exactly where we wanted to get! We now have an enticing and exciting rhythm which has depth, character and a lot of atmosphere.

Most importantly, it sounds real.

We now have a great part to add to the score.

Now let's take a look at the second tom part. We're going for a particularly aggressive sound here but we'll keep the process identical. I've created a duplicate BFD track so we're now running two instances of BFD at once. You don't need to do this but it keeps things nice and clean for demonstration purposes.

So let's start by clicking in the rhythm again:

I've chosen a slightly busier pattern to represent the impact we want from an aggressive part. This is where our hero might be saving the day!

Here's how it sounds:

Now that we're happy with the pattern we can go ahead and duplicate the part again, to trigger the other two tom drums we loaded into BFD. 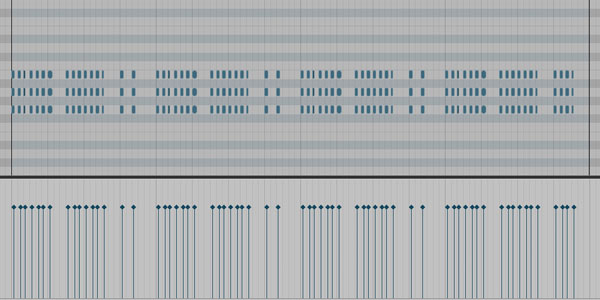 Now we're getting some power!

As you can hear, this has a lot of impact but we need to do more processing to get the part sounding realistic.

Let's use the same trick as before. I've applied a 15% of Random to the MIDI part for realism: 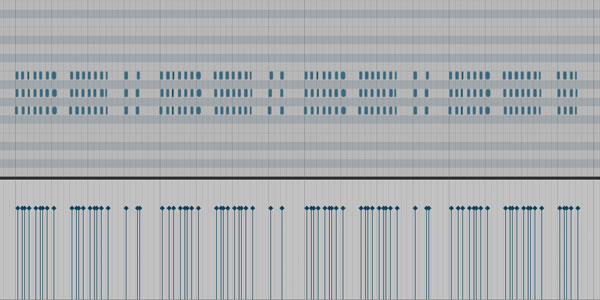 The velocities are still particularly repetitive but let's hear how it sounds at this stage:

Finally, let's change the Velocities within the part. You'll notice that the part sounds a little less harsh than before. But remember, we're going for realism and depth - by making the percussion too powerful we can really lessen the impact we want to create.

Here's how it looks:

It's sounding powerful and almost finished. Let's not leave it there just yet!

To add a slight variation I've added a snare part to round the phrase off. You can go all out and add rolling cymbals, etc - be creative and do whatever works for your piece. We're only scratching this surface here.

Here's how the part looks with the snare drum added. I've randomized the part and changed the velocities, to keep the realism we've worked so hard to achieve throughout this demonstration.

Now we've got the finished part!

Let's now piece together what we've got.

As you can see above, I've routed the outputs of the second instance of BFD to separate channels within my mixer in Pro Tools. This means we can control each tom level during the mix, which can be particularly beneficial for controlling levels and keeping the part sounding realistic.

Now it's time to pan the parts to create width within the mix, as per below.

Above you can see the two instances of BFD which are outputting the combined Overhead, Room and Ambience channels as one stereo channel, along with additional Mono channels for the toms and additional snare. I've panned these to place the three drummers around our "virtual-scoring stage".

If we play both parts together, this is what we get:

And there you have it. This is our finished part.

I've put together a basic film score arrangement to demonstrate how these parts might sound in a mix.

Here are the soft toms we created:

And here is an arrangement with both the soft and hard toms in the mix:

It's absolutely vital to remember that the most simplistic ideas can often be the most impressive. The approaches we used in this tutorial were exactly that but hopefully yielded results that go way beyond the simplistic nature of the processing we applied.

In the Hans Zimmer soundtrack for "Man of Steel", many more drummers were used. You could go way further and add lots of additional drums and extra percussion too.

How far can you take it?

Remember—the idea is to keep the rhythm simple but create size and width with building the voicing up with clever layering.

If you try any of the techniques in this tutorial, feel free to let me know below how you get on. Good luck!