Creating lush, expansive back drops can be a key part of a successful chill-out track or a great breakdown. Producing something truly original in this area requires a bit of creativity.

There's always the temptation to use an impressive pad sound from the latest super plug-in, but to really stand out from the crowd you need to dip your toes into the world of sound design.

For this example I will be constructing the main backdrop for a breakdown in a chill-out track. This sort of process could be used for just about anything, including intros, outros, breakdowns or even the basis for an entire track. This really isn't an exact science and is about thinking outside the box as opposed to using any specific technique.

For the purpose of this tutorial I have used an older chill project of mine called 'Mercury'. The track already has a few breakdowns and uses plenty of pads and textures but what I intend to do is extend one of the short breakdowns later in the track. To do this i will construct a whole new back drop and blend it with the existing audio.

I have cut the track in the correct location, split the parts and placed them on their own audio tracks. This will allow me to place any new audio and instruments on their own tracks and the result should be a seamless blend between old and new sections.

As we are joining two sections of a track here, the transition between any audio has to be smooth. This is a very chilled track so it's especially important for every change to be smooth and transparent.

To prepare the gap for the new material I have programmed some simple fade-ins and fade-outs on the appropriate sections. I have then gone on to add a large dose of reverb to the first section that fades out. This makes the end of the audio infinitely softer and gives us the initial part of our ambient soundscape. I was careful in choosing a reverb that matched the mood of the piece.

I have decided to extend the breakdown by eight bars, so it is now simply a case of building our new textures and soundscape to fit this gap. I retained the small fill or rise that occurs at the end of the first section and moved it just before the second section is reintroduced. 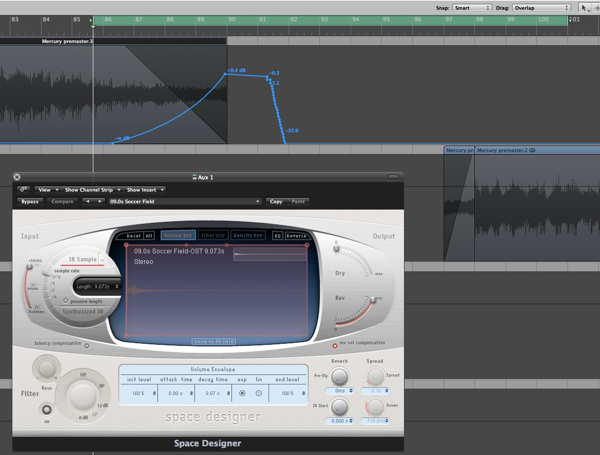 I find that when constructing new sound beds or backdrops it's a good idea to start off with a basic sound that is in key with the rest of the material. A good pad sound is usually a good start. This sound can be lowered in the mix, faded or even removed completely at a later stage but this gives us a good anchor to work with.

Here I have used a pad sound form Spectrasonic's Omnisphere synth. It is actually a sound from the original Atmosphere library and is part of a group of sounds used in the original track, so I was pretty sure the timbre would gel nicely with the existing elements. If you have the time it is well worth programming your own patch. 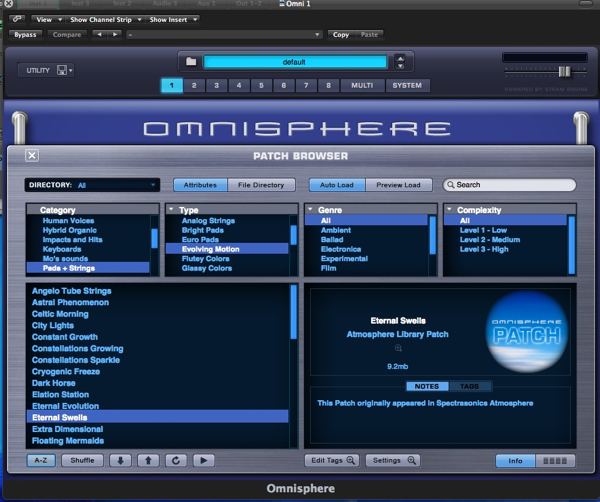 I found the root and played one long note across the entire breakdown section. This was then quantized and roughly mixed. The result is pretty good but it was clear at this point the sound would need some further processing and mixing to help it on its way. In order to do this I opted to bounce the sound to audio and import it into a fresh track. 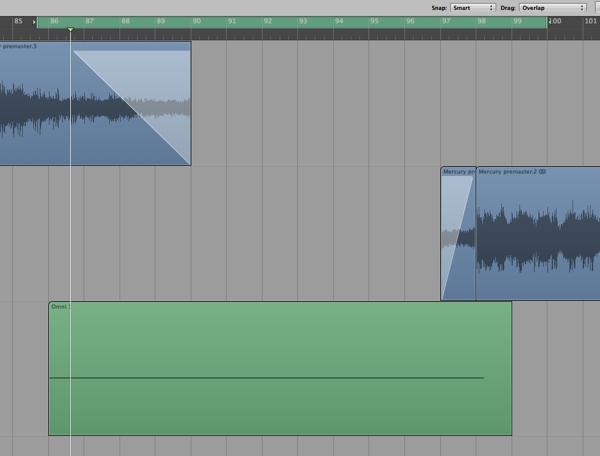 Once the pad was situated on its own audio track I was able to automate a gentle volume fade and insert a low pass filter on to the track to remove some of the top end. I then automated the cut off of this filter, which opened gradually as the breakdown progressed. The breakdown is now really taking shape and although there is work to be done this feels like a solid foundation to work from. 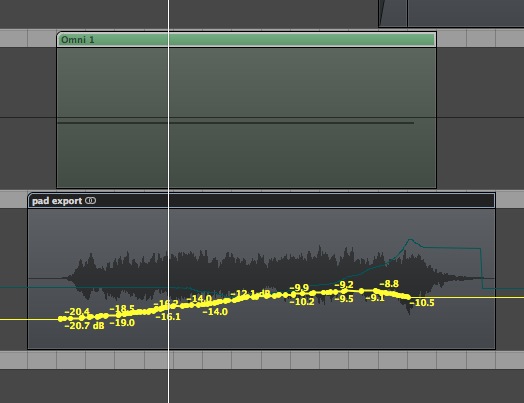 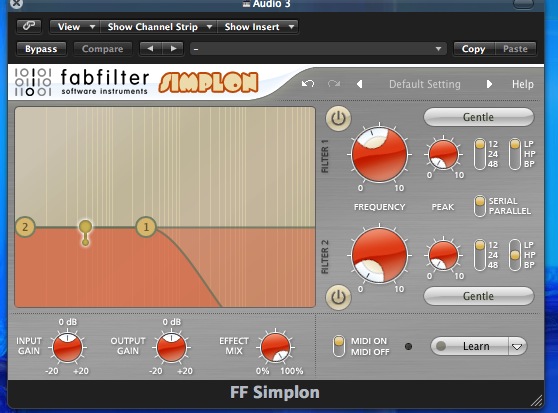 Pad recorded to audio and filtered

At this point the break lacks energy and continuity. A great way to gel new sections of track is to take some original elements and twist them slightly. The older parts can be mixed in an almost subliminal style and processed so that they take on a new feel.

Here I have cut out a section of the track and looped it to create a new part that runs through the breakdown. This creates pace and continuity. Without any processing the part was far too obvious, so I applied some filtering and several layers of automation before I felt the sound blended with the new pad. 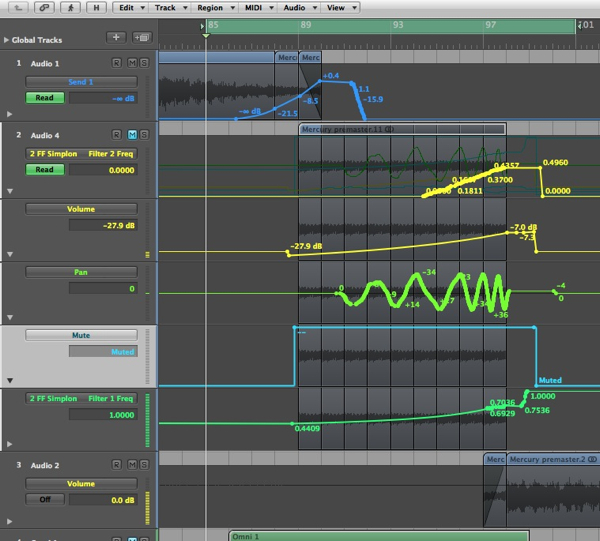 Filter frequencies, volume, mute and panning were all automated to create the desired effect. When working with soundscapes a lot of the work you do will be with complex automation, so don't be afraid to get editing. The result achieved here is with minimal processing and the break now builds in tension and the energy level is much better. 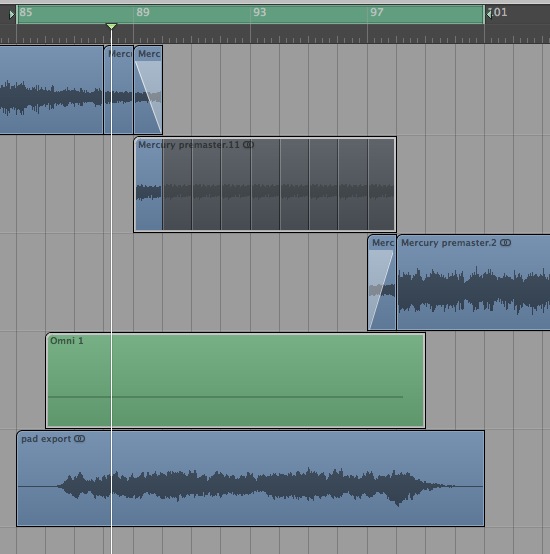 Break down with new looped section

A really nice way of creating interest when working on your backdrop is to mix organic sounds with more synthetic material. The sounds we have used so far are pretty 'electronic' in nature, so some contrasting 'organic' sounds should work nicely.

Obviously, it's best to spend some time here and really search for some original sounds to use. Ideally found sounds or your own recordings will create the best results, but in the interest of speed I used some effects samples from the Apple jam pack library.

The first effect I used was a water or rowing effect. This adds real dimension to the break and is reasonably hard to identify in the mix. There were some pretty harsh transient events in the sound, so I simply cut them out and used small crossfades to consolidate the sound. The effect was then routed through the global reverb to add some space.

For even further dimension I added a final effects sample to the mix. An outdoor recording of crickets is used with the water sample to complete the overall back drop. This is then panned using automation and mix at a low level for an almost subliminal effect.

The final effect is the feeling that the listener is outside and the stereo recording adds real width to the whole piece. On playback the breakdown should fit nicely with the rest of the track and hold the listener's interest throughout. 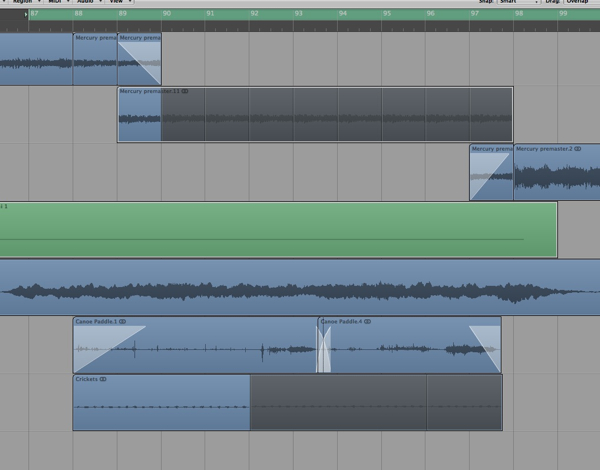