Some of Reason's most-loved patches are the Combinator’s [RUN] patches. These patches are very useful as the Combinator plays along with your song, often inspiring as song starters or templates. However, it is scary to turn the rack around and see hundreds of cables go from this device to that device. It’s not that complex; once you’ve figured it out you can make great background patterns and drum machine templates for your songs.

For this tutorial I’m going to re-create a Combinator patch that I have used in a song recently. This Combinator patch runs throughout the song without a single note pressed. In the first part of this tutorial I’ll try to explain how to put together a [RUN] patch and configure macro controls; then in the second part of the tutorial, I’ll add complexity with “uneven” patterns to make it differ from just a simple loop.
If you are new to Combinator, check out Eric Shafer’s Combinator tutorial to learn the basics of this instrument.

I’ll start off with a default rack which is a Mastering Suite Combinator and a 14:2 Mixer. I’ll set the tempo at 75 BPM. Then I’ll throw in a Combinator and after that, inside the Combinator, create a Line Mixer, a RV7000 Reverb and a Redrum. Keep in mind that Reason auto-routes the devices where you place them. So if you have done it in the same order I did, you should have Redrum routed to the Line Mixer’s 1st channel and RV7000 to Send/Receive channels, as seen in the screenshot: 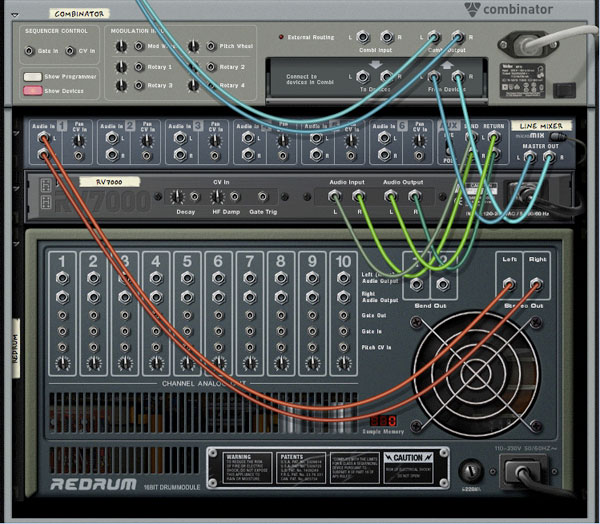 Now I’m going to load the “Click House 4” patch into the Redrum. Actually you can use any patch, any pattern or even the BPM you prefer throughout this tutorial. Next, write down a pattern with using Redrum’s built in pattern sequencer. It’s important to use built in sequencers because we want the instruments to run on their own. My pattern sounds like this:

You can totally write down your own patterns. Now let’s add a bit of spice, I’m going to use the “EKO 4th Ping Pong” patch on the RV7000 and turn Channel 1’s Aux send value up around 85. Next thing to do is drop a Malström Synthesizer and a RV-7 Digital Reverb but when you’re doing this, hold down the shift key so the devices don’t auto-route. Name this Malström “Kick Filter”. Naming is important when setting up the macro controls. On the RV-7, select "Hall 2" algorithm and set Dry/Wet around "20".

Now turn the rack around and route Redrum’s drum 1 to the Malström’s “Shaper / Filter: A”, then connect Malström’s “Left / Filter: A” to RV-7's input and then RV-7's output to Line Mixer’s channel 1 input. Next drop in a DLL-1, again holding down the shift key, and route the Redrum's "Drum 3" channel through this delay. Set Dry/Wet around 40. Here's how everything looks: 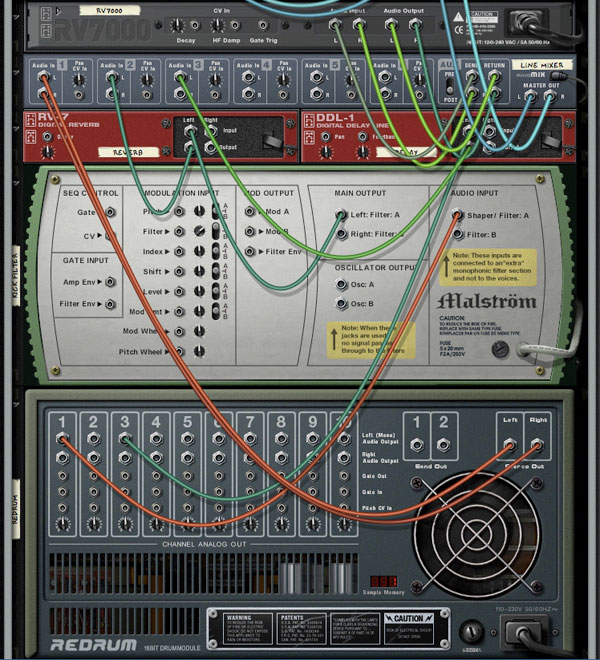 Step 2: Setting up the Macro Controls for the Drum Part

We've wired a lot, now we can use some automation to play with. Click on Combinator's "Show Programmer" button, then select "Kick Filter" (the Malström) and on the right panel set "Rotary 1 > Filter A Freq > Min:0 Max:127". Then on the second line click on "Rotary 2" and select "Rotary 1" from the list, then set "Rotary 1 > Filter A Resonance > Min:80 Max:20". This setting will allow you to control two knobs with one rotary. Go ahead and try; you'll see Malström's Filter Freq and Resonance are controlled by the Combinator's Rotary 1. You can now double-click on the rotary name and set it to "Kick Filter". Here's how it looks and sounds:

Next thing to do is, again on the Programmer, select Redrum and set "Button 1 > Drum 3 Mute > Min:1 Max:0" and rename Button 1 as "Snare". This setting basically enables the Snare Drum. Before going to the next step, rename the Line Mixer as "Drums".

Now we're going to add two atmospheric pads to play along. Drop in one more Line Mixer on top of all other devices in the combinator and name it "Pads". Then drop one Malström and then one Matrix Pattern Sequencer device. Name this Matrix as "Pad 1". Then, again under the "Pads" Mixer, create a Subtractor Synthesizer and a Matrix named "Pad 2". Create a pattern in this Matrix also. Load the "fx > Cycling9s" patch on the Malström and route it through a RV7000 Reverb with the "EKO RollingFiltMultiTap" patch and Wet/Dry set around "64". Then load "Pads > Warm Pad" patch on the Subtractor. 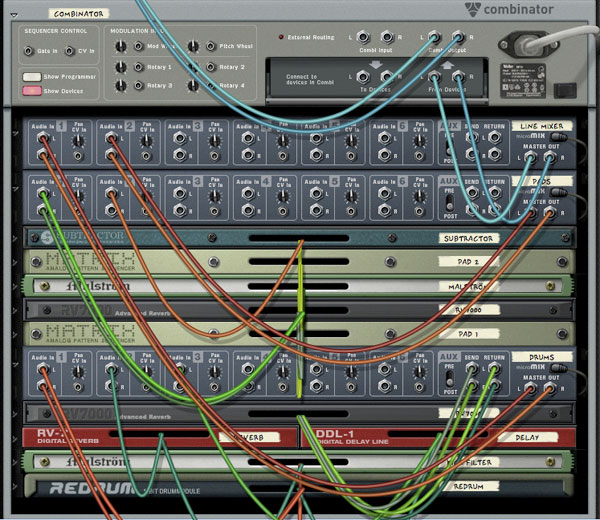 Now we can go and create a pattern in the Matrix "Pad 1". I will write down four patterns from A1 to A4, by copying and pasting patterns. Then on the "Pad 2" Matrix, I will create a longer pattern which both looks and sounds like this: 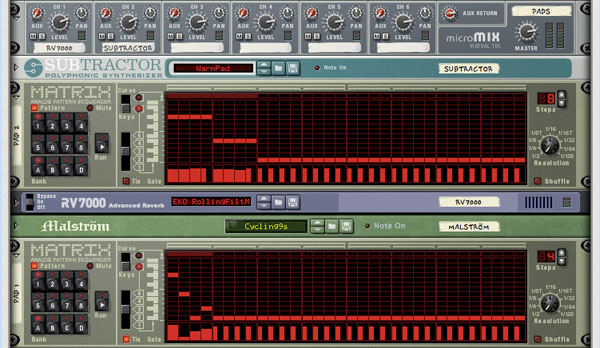 We have two different Pads so it would be nice to enhance them with an Auto-Pan effect. Below the "Pads" Mixer, hold down shift and create a Malström, then a Spider CV Merger/Splitter. Name the Malström "Auto-Pan". Now turn the rack around, route Malström's "Mod A" CV output to Spider CV's "Split A", then route one CV output to "Pads" Mixer's Channel 1 Pan CV in and route the "inverted" CV out to Channel 2 Pan CV in. Turn these channels' CV input knobs up to 100. As you see Malströms are very effective as modulators for other devices. Here's a screenshot of this routing: 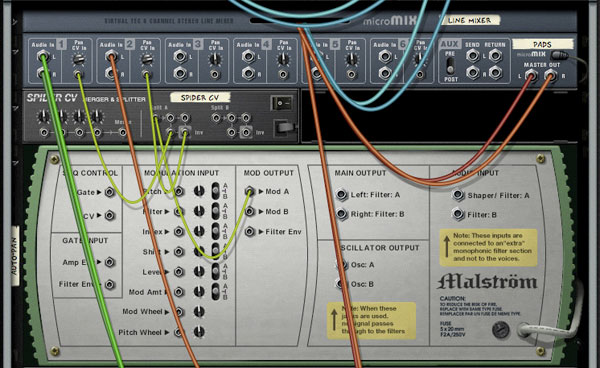 Remember to save this Combinator patch.

Do we want more automated goodness? Connect "Auto-Pan" Malström's "Modulator B" CV output to Combinator's "Mod Wheel" CV input, then play around with Modulator B Curve and Rate; or if you like, bind them to Rotary 4.

So this is it for Part 1. This information about routing and programming should give you some idea about using the [RUN] patches. In Part 2 I'm going to add more devices and modify patterns in a way that the patch doesn't run like a simple loop.

Audio ProductionReason
Did you find this post useful?
Yes No
Would you like to provide feedback (optional)?
Cancel Submit
Want a weekly email summary?
Subscribe below and we’ll send you a weekly email summary of all new Music & Audio tutorials. Never miss out on learning about the next big thing.
Sign up

Gönenç Giray
Gönenç Giray is an electronic music producer and performer from Istanbul Turkey, and the other "half" of the trip-hop/electronica duo Plüton.
Looking for something to help kick start your next project?
Envato Market has a range of items for sale to help get you started.