Reason's Combinator is a powerful device that can be used as a machine for drums and background patterns. With some routing tricks and some unusual pattern settings a Combinator Machine can evolve throughout the song.

In the Part 1 of this tutorial we created a drum pattern and two pads with Auto-Pan controls. In the second part we'll incorporate more sounds, and with the use of "uneven" patterns we'll create a Combinator patch which is not just a simple loop.

We'll be working on the previous project so make sure you have downloaded the PlayPack from Part 1 of this tutorial. Load up the "Siren Machinery.rns" and let's begin.

Below the Line Mixer, create a Spider Audio Merger/Splitter and name it "FX Mix". Then create a NN-19 Sampler and a Matrix Pattern Sequencer below that. Click on the "Browse Sample" button and go to "ReDrum Drum Kits > xclusive drums sorted > 10_FX" and select "FX Frankfurt.wav". This is a nice bleep-like sound sample. We're going to make this sound even better with a stereo delay treatment. 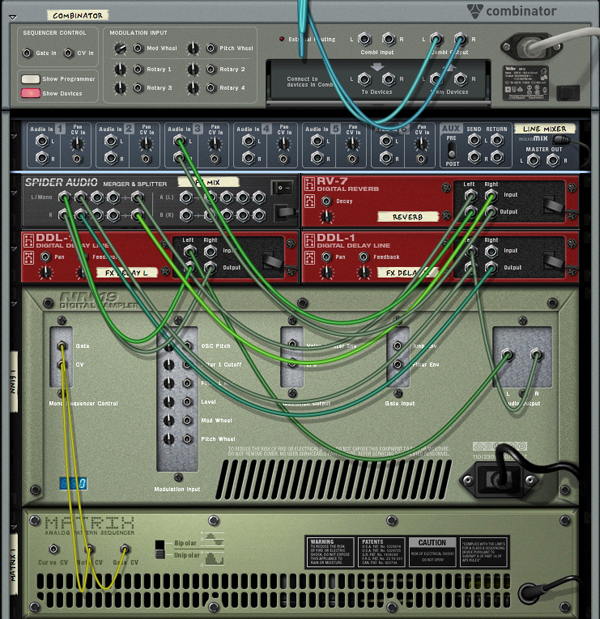 Turn the delay steps on "FX Delay L" to 2 and pan to full left, then the delay steps on "FX Delay R" to pan to full right. Now set the Feedback around 75 and Dry/Wet around 85 on both delays. Then on the RV-7, set Dry/Wet around 75. If you play a note now you'll hear the stereo delay effect we created using two DLL-1s. At this point, you can play around with the settings on the Delays and Reverb.

Now let's create a pattern like the one in the screenshot. This is basically a one shot C3 note on every 16th step with a 1/8 resolution.

And this is how the effect sounds:

Let's create another sound effect. Select "FX Mix" Spider Audio and again, create one NN-19 and one Matrix sequencer. Make sure that the NN-19 is routed through the Spider's merge inputs. For the NN-19 go to "ReDrum Drum Kits > xclusive drums sorted > 10_FX" and select "FX Jeepkeys.wav", then create the pattern seen on the screenshot below:

Select Line Mixer and create a Thor PolySonic Synthesizer. Load the Thor patch included in the PlayPack of this tutorial. This is a very basic triangle waveform synth sound, which I call the "Bleep FX". Route this Thor through a RV7000 Reverb, then select the "ALL 1st Plate" patch and set the dry/wet value around 85. Then attach a Matrix Sequencer to this Thor and on the Matrix, create the pattern seen in the screenshot:

Alternatively you can use Thor's built in sequencer.

Most of the songs, especially in the electronic music genre, are done in a 4/4 time signature, and in a 4/4 song, pattern step lengths are set as powers of 2; like 4, 8, 16, 32 and so on — just like the patterns in our Combinator patch. If you play the song with these patterns, you'll hear a loop going on and on exactly the same every time, like this:

This is because the patterns are set to 16 steps long, which is a power of 2. There's nothing wrong with this, but if you change the step length of the first FX pattern to 20 and the second FX pattern to 12 you'll hear the FX are played quite randomly throughout the song, creating a more interesting composition. Also, for the Thor's pattern try setting the length to 17 steps, you'll now hear that no two loops are ever the same. Here's an example:

You can go crazy with these kind of patterns, especially if you are into the IDM genre. Go down to the ReDrum, right click and select "Copy Pattern". Now press "2" on the "Pattern Select" buttons, right click again and select "Paste Pattern". Then set this pattern length to "24". Then go to "Edit Steps Select" and select 17-32 steps, edit the pattern a bit. Go up to the programmer section of the Combinator, select ReDrum and set "Button 2 > Pattern Select > Min:0 Max:1".

Rename this button as "Drums 16/24". This is a basic pattern switch button but before using this, you must clear any pattern automation on the ReDrum you've made previously. To do this, right click on the Pattern Select buttons on the ReDrum and select "Clear Automation". Here's the final sound after changing the drum pattern:

Thanks for reading — please leave a comment if you have any questions or improvements. 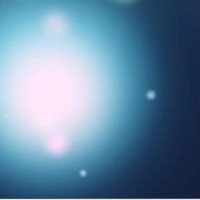 Gönenç Giray
Gönenç Giray is an electronic music producer and performer from Istanbul Turkey, and the other "half" of the trip-hop/electronica duo Plüton.
Weekly email summary