This tutorial is actually based on a request that someone made in a tutorial about synth-based effects. Creating noise-based rises and drops for dance mixes is something I get asked about a lot so I though this maybe helpful to some of you.

We’ll take a look at the different types of effects typically used and the ways in which you can create them. You should be able to follow this tutorial using pretty much any DAW and any capable soft synth. In this case I’m using NI’s Massive and Logic Pro 9.

Step 1 - Up Risers, Down Risers Whooshes And Washes

So the truth is that this family of effects get called all sorts of things by different producers. You might hear some people calling them up and down risers, others might simply call them whooshes.

At the end of the day no matter what you call them they all do very similar jobs and are also made in very similar ways form one studio to another. These effects are usually key in creating smooth effective transitions, builds and drops.

I think the reason I’m asked about the creation of these effects so often is the fact that they can literally bring a project to life. Once these effects are mixed and placed correctly try playing the track back with them muted and you’ll wonder how you ever lived without them.

Let’s take a look at the different ways we can create these essential dance music effects sounds. Before you jump in and say that I haven’t included your favourite method or sound, hang fire! This is really meant to be a round up of the most common techniques used and not a definitive list.

As I’ve already said these effects can be produced using a few different methods but I’d say right at the top of the list is the use of white noise. You can nearly create all the effects we are talking about here using noise as a sound source.

The vast majority of modern soft synths feature a solid noise generator. By feeding the noise through a simple zero attack, zero release amp envelope and a low pass filter you already have the basis for some simple but effective transitional effects. 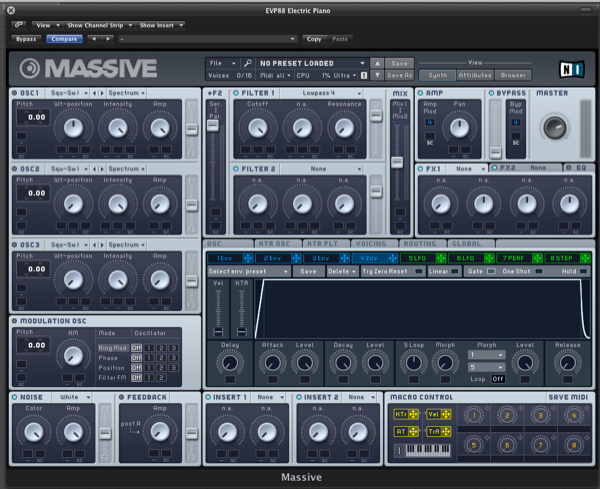 The real key to bringing these sounds to life is modulation and effects processing. We’ll look at how to apply these two elements to our basic noise based to turn it into something really usable.

The noise bed we’ll be using

So we have our static noise bed and it;s time to make it move either, up, down, around, or side to side! This can be done by using LFO’s and envelopes to control specific parts of our synthesiser.

For instance if we want to create a classic rising effect we could use a slow attack envelope to effect the cut off frequency of the low pass filter. We could then add some release and match the settings roughly using a amp based envelope. This would give us a rise and fall on release. 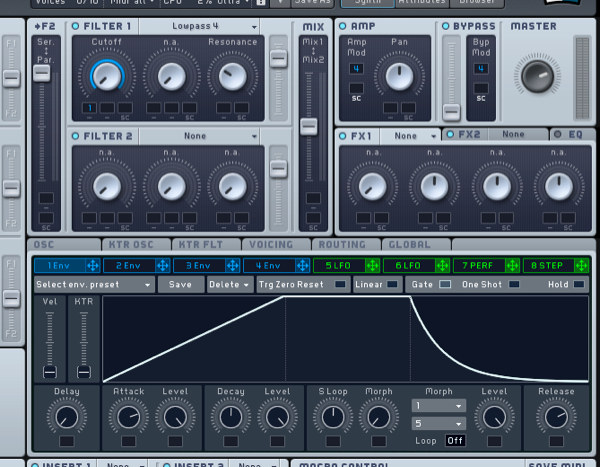 The simple up riser effect

If you wanted the opposite of this you could use a decay based envelope to close an open filter. This would give you a rising and falling patch to use. Of course any of take place.

The opposite downward effect

Beyond this you can try using LFOs to create auto-pan and filter wobbles within the movement of the envelopes. This is just basic stuff as you start to build your first transitional effects you will soon start to add extra modulations for variation.

To add some dimension to our noise based effects we can use some basic processing. Spatial effects such as reverb and delay work very well here to give a sense of depth but you can also try modulation to introduce even more movement.

I often find that a phaser works very well with any white noise based patch and it’s certainly one to try. If you find this a little intense go for a chorus or ensemble.

Delay and reverb will not only add width to your sound but it will also smooth out any rough edges. If you have sudden start or end points in your patch a well timed stereo delay will help the transition be smoothed and introduce continuity to the next section of your song.

Go ahead and make your own noise based transition effects and in another tutorial we’ll look at mixing these with samples and other synthesised patches to create more complex effects mixes.