This series of quick tips will outline how you can use the ever powerful NI Massive synth to create techy basslines used by artists such as Skrillex. In this example I have used Cubase but the same principles will translate to pretty much any other DAW. Here is an example of the kind of sound you can expect to end up with at the end of this series:


In this second installment we will look at the basic parameters you will need to set up to build your synth patch in Massive.

Applying some bit crushing to our sound is a great way to really rough it up, and fits in nicely with the 8-bit sound that is heard in a lot of electronic music at the moment. Using the standard Cubase bit crusher effect (found in the 'other' sub menu) drop this into one of your effects slots on your Massive instrument channel.

Now increase the sample divider and hear the effect it has on the sound. I've decided to settle on 10, though you may not wish to go as far as this. I'd recommend not going much higher than this at this stage as we will be adding even more bit crushing at a later stage.

In this example I'm working with the Ohmforce Ohmicide plugin, which I can highly recommend, however there are various free plugins available such as Tridirt. 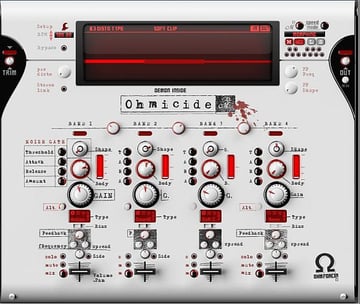 In this case I've set the unit to work with three bands. The first, from 0-180 Hz is set to add some body, without too much gain to avoid muddying up the bottom end. The second band, from 180-1700 Hz has much more gain added, resulting in more vicious distortion. For the final band, from 1700 Hz upwards I chose to use a soft clipper, with some pretty heavy gain to give some bite but avoid having too harsh a top to the bass.

You can hear that most of the energy is coming from the wide middle band, with the bottom and top just adding a little sub and top end noise. Here are all three together:

Our sound is now taking shape, but is sounding a little harsh. We can use some EQ to soften things up a bit.

I've used the Cubase 'studio EQ' here as we want this EQ to be next in our effects chain, rather than after it which is where the Cubase channel EQ sits. I've made cuts at about 500 Hz and 2 kHz, as well as rolling off the sub bass from about 60 Hz - in this before and after you can hear how these cuts have removed some of the harsher and muddy tones from the sound.

The difference is subtle but you should be able to hear a slightly brighter, more refined tone. Some patches require more heavy EQ work than this example so don't be afraid to use some more bold EQing if you feel like your sound needs it.

In the final part of this series we will look at how by using multiple instances of Massive, and some clever sequencing techniques you can build on this sound to create a complex, dynamic bassline.

Jack Wiles
Jack Wiles is a qualified and experienced sound engineer/producer working in Nottingham, England. As well as working with bands in the studio and producing digital music on a regular basis, he also works as a sessional lecturer, delivering courses on music production for various college institutions around Nottingham.
Weekly email summary