In this tutorial, we're going to work through a hands-on workshop and create several Thor synthesizer patches. Then we'll take our new patches and combine them into a redistributable Reason refill using Reason Refill Packer.

Several months ago, I published Your Guide to Getting Started with Synthesis in Reason. Since then, many readers have been asking for a more 'hands-on' article to using Thor, one of Reason's polyphonic synthesizers, so today, that's what we're going to cover.

For this tutorial, we're going to need the following:

It is also highly recommended that you read Your Guide To Getting Started with Synthesis in Reason before attempting this tutorial, as that article contains much needed background information about synthesis and, in particular, the components of the Thor synthesizer. 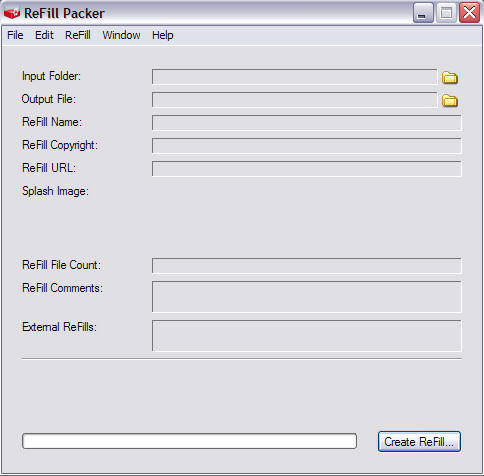 Running the program should reveal the window as seen above, which we will come back to after we've built the synthesizers.

The first synthesizer that we will be building today is a synthesized piano, with a sort of "outer space" feel to it. This particular synth would be something you might see in various electronic genres.

Click on "Show Programmer". We can see that the default is a single analog oscillator, with a low pass ladder filter. If you play a few notes, you notice that it's a standard analog synthesizer sound. 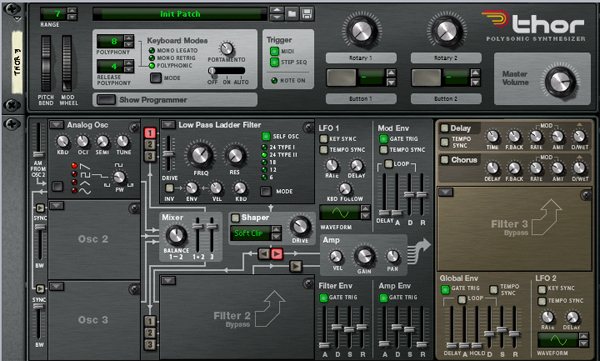 Let's start seeing what we can toy with. Click on the down arrow next to Low Pass Ladder filter, and change it to a Comb Filter. 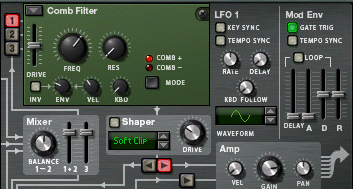 If you're listening, you probably noticed that the synth now has a "grainer" sound to it. Okay, now let's move to Filter 2 and Filter 3's empty spots, and let's choose a State Variable Filter for both of them. You probably won't notice a real difference in the sound, maybe just a faint whisper sound in the background. 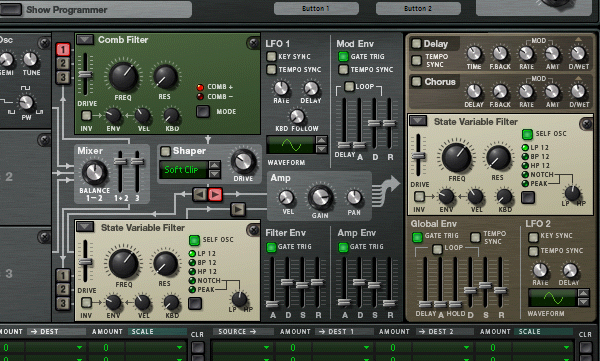 Okay, now we've got the essential base for our synth piano. Doesn't really sound like a piano, does it? That's because we haven't touched some of the essential components of the Thor synthesizer yet. Turn the shaper on, and set the mode to "Saturate". Again, not a big difference, right?

Here comes the really fun part. Turn both Delay and Chorus on.

Big difference there. The delay and the chorus are both taking our oscillator sound that is run the filter, and adding to it.

Time to modify some settings to get a better sound here. Set the following values:

Now, flip the arrow on the Shaper > State Variable Filter > Amp. Previously, the shaper was heading straight to the amp, but now we're routing it through the State Variable Filter first. However, for this patch, we'll keep the Osc1-Filter2 button turned off, if we turn it on, it will act as an amplifier for the sound.

You should hear a nice synthesizer pattern that you can use in your music. 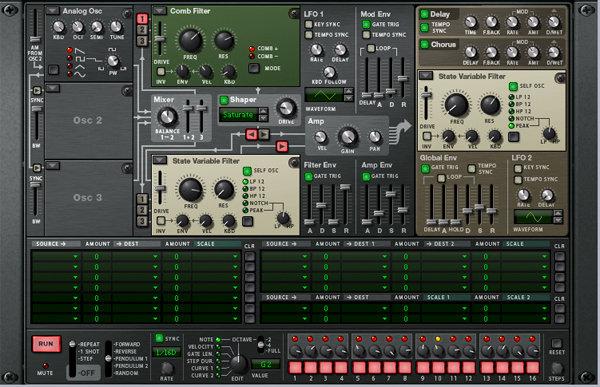 The other synthesizer that we will be building for this tutorial is a lead synth to accompany our synth piano. Again, start by creating a new Thor synthesizer, and reinitializing the patch by right clicking and choosing "Initialize Patch". For this synthesizer, we'll be using 3 analog oscillators, a low pass ladder filter, a formant filter, and a state variable filter.

Start by choosing "Analog Osc" from the drop down list for Oscillator 2 and Oscillator 3 on the Thor synthesizer. 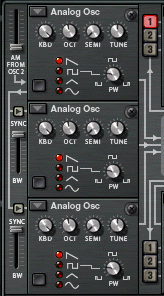 Next, choose a formant filter for Filter 2. 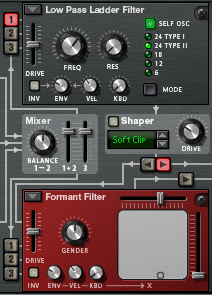 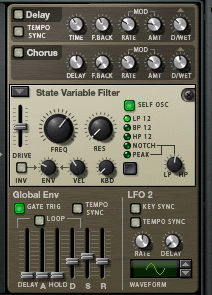 Let's take a listen to what this 'default' setup gets us.

Curious, it sounds just like our other synthesizer. Let's try to see why. Look at the buttons next to "Low Pass Ladder Filter" and "Formant Filter" that are 1-2-3. Notice that only 1 is lit. What happens if we turn on all 3? 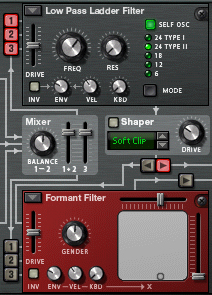 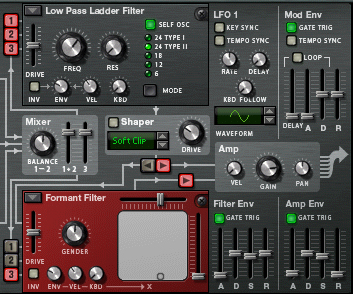 Now we're getting somewhere. If you listen carefully, you can detect a 'metallic' sound to the synthesizer now. If you were paying attention to the last synth we built, you'll probably remember that most of the magic occurs when we turn on Delay and Chorus. Let's see if it happens again. Turn on Delay and Chorus. 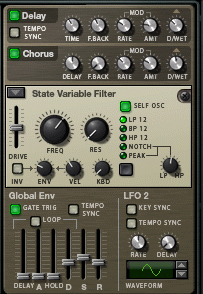 Sounds different, a bit more like a lead style synth, however, it doesn't sound all that good at the moment. Let's fine tune our synth by setting the following values:

Time to modify some settings to get a better sound here. Set the following values:

For the above audio clip, the sample audio was raised an octave.

Okay, now that's done, but it still doesn't sound exactly how I was thinking. The Formant Filter section sounds pretty good, but something doesn't sound right about the sound from the Low Pass Ladder filter.

To fix this, we're going to manually program some values into our source/destination programmer.

Refer to the image below and set the values accordingly. I would list them out, but in this case, images speak far better than words.

Essentially, the image above is a routing table, that defines routing of various Thor components. For example, the first two things we routed (the Key Velocity and the Mod Wheel), correspond to the components on your MIDI controller. We also programmed the rotary wheels and the buttons on the Thor, and did some other routing as well. Let's have a listen to our finished product.

Now if we play the two synthesizers at the same time, we get something like this.

Pretty cool, not exactly the prettiest composition, but each of these synthesizers would work perfectly in an electronic or atmospheric song, or a space-themed soundtrack.

We now have two pretty awesome synthesizer patches. Let's build a refill using them, allowing these sounds to be distributed around the internet. Run the Reason Refill Packer that we installed before. In order to create a refill, we need sounds, a splash image, and an info.txt. If you navigate to where you installed Reason Refill Packer, you should notice a folder titled "Sample Folder". Inside this folder is a splash.jpg image that has the typical Reason Refill icon as the image, and an info.txt with the following contents:

Now, create a new folder on your desktop, and title it "The New World". Open Reason again if you closed it, and hit save for any sounds you want in the refill, and save them into our new folder.

Now, click the browse icon next to the "input folder" textbox, and choose "The New World" as the directory. 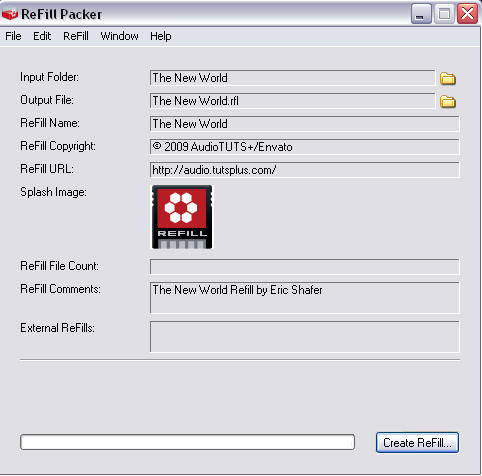 Congratulations, that's all there is to it. You're now the proud owner of your own Reason refill!

The files associated with this tutorial are downloadable from the Play Pack, including the Reason refill with the two sound patches. They are yours to use, but if you create anything awesome with them, at least leave a link to it so we can all hear it. Enjoy, thanks for reading, and hopefully you learned something. If you have any questions, I am always willing to answer them in the comments section.