Designing a Synthetic Machine with Absynth

Absynth is one of my favorite tools for sound design, though I don't get a chance to use it nearly as often as I'd like. It has an extremely deep and flexible synthesis engine, yet remains accessible and fun to work with. In just a short amount of time you can have a unique, original sound to use in almost any musical or sound design application.

In this tutorial, we'll be working exclusively inside of Absynth 4, creating a synthetic mechanical sound by using Absynth's amazing breakpoint envelope system.

After launching Absynth, we'll go to the file menu to create a new sound, which I've called "AudioTuts_SyntheticMachine".

Next we'll move to the patch window, where we'll set up the basic elements of our sound. On first opening, the Patch window will have only OSC A active, with a default Sinewave as the ocsillator.

We'll change the oscillator type to Fractilize, and select Noise 1 from the Simple Waves menu. We'll set the Transpose field to -45 units.

In the Mod tab of Osc A, we'll set displace to 35 units. In the Uni tab, we'll set Trans to 5 units. I've taken screenshots of each of these settings below, so you can get a feel for them. We'll skip some of the screenshots for the other oscillators to keep things moving. 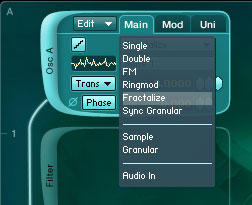 We'll now add some modulation and filtration to this oscillator. Click on the Filter section for Osc A, and set the filter type to Comb and the frequency of this filter to 55Hz.

Enable the Mod section for Osc A and set the Modulator for Freq Shift, using Simple Waves -> Saw_real as the wave type and 7Hz as the frequency. We'll leave feedback at .35.

Here's a screenshot of those final settings, along with a sample of the sound we've got so far. 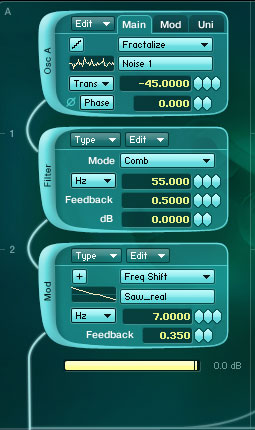 Next, we'll create a drone sound using Oscillator B.

Oscillator A and B

Next we'll create some high frequency content to add to our machine.

Our final output of the three oscillators is almost complete. Here's what we've got so far: 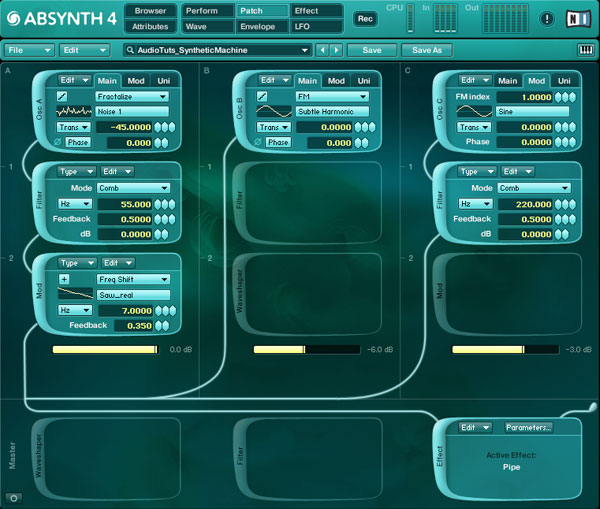 Oscillator A, B and C

The final step on the Patch page is to route the Master Output through the Pipe effect - one of my favorites! 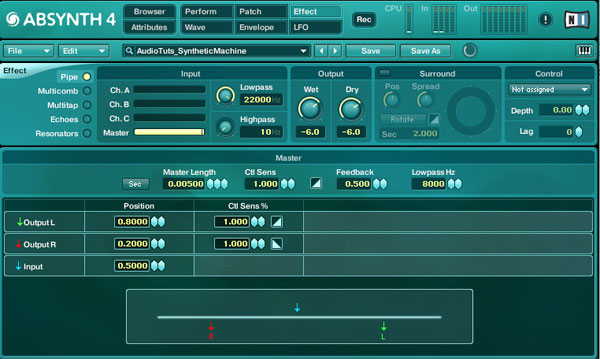 The final step in our sound is to create some additional motion in the sound by using Absynth's powerful Breakpoint Envelope system. There are a nearly infinite number of ways to modulate your sounds using the Envelope system in Absynth, so we'll just experiement with a few of them. 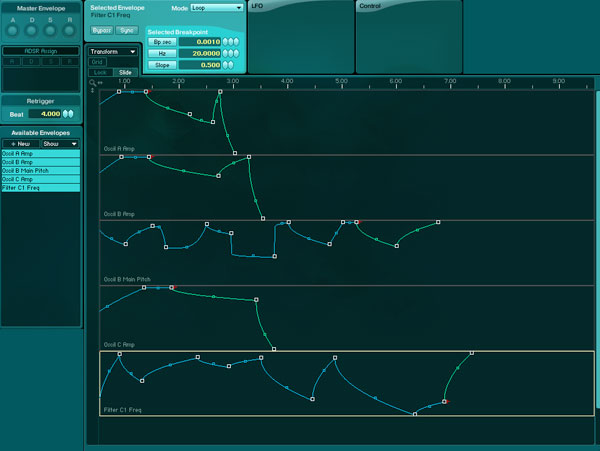 And the final output, played back at various pitches:

Absynth is a very deep synthesizer, and we've only scratched the surface of its capabilities. If you enjoy this tutorial, let us know in the comments!