The basic rhythm track drives the song forward, and everything else builds upon it. You may have written your song on an acoustic guitar and laid that down first, but drums are usually the backbone of a song, keeping everything well structured and grooving. But what if you don't know how to record drums? Or you end up with someone's recording that's so bad that you'd rather tap pencils on your desk. Drum replacement may be an option.

Recently we showed you how to use Logic Pro 9's Drum Replacer. This tutorial covers a technique that allows you to fix drum tracks by replacing the drums using previous versions on Logic.

In the following tutorial we'll be looking into Logic's Audio to Score function as a way to replace drums. We'll see how to transform your drum hits to MIDI and then replace them with a better sounding sample.

Let's start by listening to the drum part we'll be replacing. It's a pretty simple beat, which lends itself easily to drum replacing.

We'll start by replacing the kick drum, which doesn't have the necessary oomph it needs. We'll be needing all the audio information from the original track and by converting it to MIDI. Logic makes an estimate of how hard the kick drum hits by scanning the amplitude of the waveform, and transforming that information to a respective velocity value. That way, we get a fairly realistic human feel to our MIDI.

Step 1 - Clean Up Your Track

If your drum tracks were recorded all at once I'm guessing there is some amount of bleed from other drums. You might be hearing a little bit of the hi-hat and snare through your kick drum mic, and a little bit of kick drum from your snare mic. Focusing on the kick, I think the best way to clean up your track is to start by gating it.

Try to gate it as much as possible until only the kick drum comes through, and it doesn't open up to the snare hits. You could also re-record the gated track so that Logic only sees the gated waveform and doesn't get confused with snare and hi-hat hits. I gated my kick and routed it to a new track to be recorded.

I put the output of the old kick drum to BUS 1, created another track and put the output to the new to BUS 1 as well. That way I get a really clean kick drum sound without bleed from the other instrument. We don't really have to worry about the sonic quality of the kick drum, nor the gating as we will be replacing it completely in the next few steps.

Listen to the kick drum before gating:

Create a new software instrument track below the intended track you want to replace. We'll be using this track later for our new kick.

Step 3 - Use the Audio to Score Function

This should pop up a window that has a lot of buttons. Don't worry, we won't be using a lot of them for now.

Select Drums Fast in the preset box, or depending on your song you might want to pick Drums Medium or Drums Slow.

Using the threshold button you can fine-tune which hit is converted to MIDI, based on how much amplitude it has. If you have an un-gated, bleedy track, then this serves as a way to filter out the unwanted noise the mic picked up during recording. But we have a very clean bass drum track so we don't have to worry about that for now. We'll come to it later.

Before you click on Process be absolutely sure that you have clicked and selected the empty software instrument track below. If you still have the audio track selected, Logic will just create a MIDI track over the audio track and delete the audio track. It's a hassle if you don't realize it, and then come back to see that your audio tracks are gone.

So when you do click Process Logic should create a MIDI file in the software instrument track. It should also open up a window with the music score, but we can close that as we won't be using it. 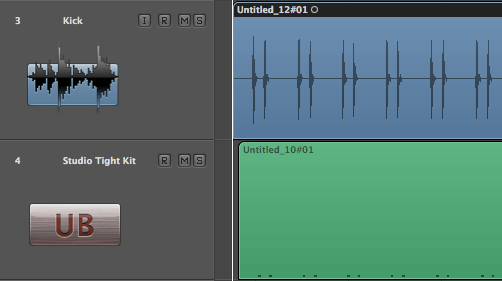 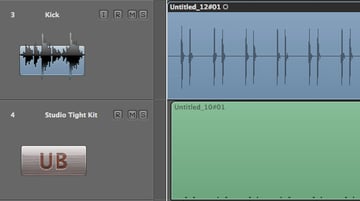 After using the Audio to Score function to transform your audio to MIDI, you will end up with something similar to this. 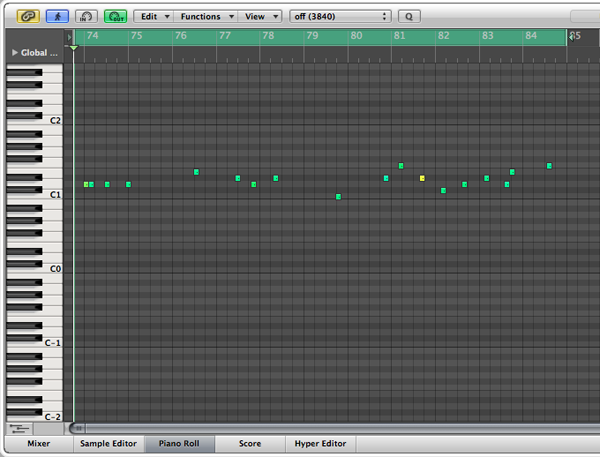 We want to have each MIDI note play the same note - i.e. a drum hit. We will have to move all of these tiny notes to one specific note on the piano roll. Luckily there's a much easier way of doing it than having to move each and every note to the same key.

In the piano roll window, select every note by either dragging your mouse over the notes selecting them, or just simply click CMD + A. Now go to Functions > Transform > Transposition.

This will open the Transposition window. We want each note to have the same fixed value so click on where it says Max and we change it to Fix. After that we can select which key on the piano roll will discharge the sample. I'm picking C1 since it is where the bass drum is usually located. Click Select and Operate, and then close the window. 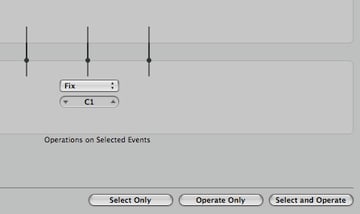 You should en up with something very similar to this. Notice that each MIDI note is now in the same place.

Now that we have our MIDI information, we need a sample to go with it. In the software instrument track, load Ultrabeat as your synthesizer in the input path. Ultrabeat is an extremely powerful drum sequencer that has so many that buttons and features that you can play along with it endlessly. For a completely different perspective on Ultrabeat, check out Toby Pitman's tutorial on creating gated sequences.

In the OSC 2 section, Sample should be selected. We click on the little arrow above the waveform and select Load Sample. Ultrabeat lets you load whatever sample you happen to have in your possession, and I loaded a tight modern rock kick I thought suitable for the song.

Now, if you have followed each step closely, and have transformed and transposed your audio to a MIDI note on the correct key on the piano roll, the sample should playback once you hit play, following the exact same kick drum pattern as the former audio.

So we have replaced this:

If you have a sample that you like but it doesn't quite have the low end oomph you want, check out my other tutorial on sidechaining a sine wave to your bass drum. That's a good trick to get a tight low end to your kick. Also, if you want to completely change the feeling of the song, you can put weird sounds instead of drum hits. That way you can have the feeling of a human drummer with radically different electronic sounds.

The snare has an annoying ringing sound to it, so we want to replace that as well. We might be able to salvage the snare with some radical EQ, but sometimes it's just easier to replace it completely. We won't be gating it or doing any processing this time around.

We need to redo everything just like before, except for one detail: in the Audio to Score window there is a parameter that says Velocity Threshold. We use this threshold like a gate: sounds below the threshold, like hihat noise and other bleed, won't be converted to MIDI.

The screenshot below shows the audio that will be converted to MIDI when the threshold is at 1. See all the little white lines that are not as high as the other ones? This is extra noise we don't want so we up the threshold until it looks clean.

In the next screenshot, I have put the threshold at 6, which makes all the extra white lines go away and we're left with only the necessary snare information.

That's two ways of doing it. You can either clean up the audio track yourself, by gating it and re-recording, which can be time consuming. Or you can use the threshold in the audio to score feature to clean up excessive bleed.

In the transposition window, we need to move all the MIDI notes to the same one again, but don't forget to change on which key the snare should sound, otherwise we will only be hearing a lot of bass drum. Change it to D1 and then load your new sample into D1 in Ultrabeat.

If you don't like working with MIDI and would like to convert it over to audio again you can always route Ultrabeat to a new audio track and record your MIDI files to audio. You do it the same way we did before with the kick drum, routing Ultrabeat's output to a bus, creating a new track with the bus as it's input then recording the whole thing again while you grab a cup of coffee.

So by replacing these two crucial drum sounds, the kick and the snare we have made this drum beat:

Now all we have to do is start mixing. And when we've got good ingredients to mix with, the end result is always going to be better.

Drum replacement is a great way to salvage horrible sounding tracks, saving a good song from sounding bad. Of course, if you are recording the drums in the first place you should take care that your drums sound good from the get-go so you don't have to resort to these measures. But if you get sent badly recorded drums sounds to mix, there's no reason you shouldn't use every tool at your disposal to make them sound better.

I hope you found this tutorial useful and can use these tricks for your projects. Of course, this is not the only way to replace drums and I've only skimmed the surface of drum replacement, so if you have anything more to add, please let us know in the comments.