Dubstep for Beginners - Part 1: The Drums

With three equally important focal points, this tutorial series will initiate you each of these areas of dubstep and how to start producing your own grooves. This first tutorial will focus around the drum beats and what makes the dubstep beats unique. Get ready for some head nodding grooves!

Unless you have been living under the proverbial rock for the last few years you probably have heard dubstep — whether you were aware of it or not. Dubstep is a genre of electronic dance music known for its head nodding beats, dark atmosphere, and ear shaking bass. It draws upon many other genres including drum n' bass, dub (reggae), 2-step, glitch, and hip-hop and fuses them all into its own unique blend.

While originating in the UK, dubstep can be found all across the globe today and is becoming a popular form of remix for main stream radio and clubs in the United States (who always seems to lag behind the times with electronic music). Dubstep's main hallmarks are the half time beats, wobble bass, and dark soundscape; all of which play off each other.

Setting Up Our Project

Like most genres, dubstep has certain conventions. These do not necessarily have to be adhered to but before you can break the rules you need to know what the rules are. Being one of the younger electronic genres, dubstep's identity is very important to proponents of the genre so I would recommend following these conventions for now until you become more familiar with the genre.

Now you may be wondering why we set our project to 140 BPM but our kick and snare are on beats one and three. The reason is often times for dubstep the drums are in a half-time feel while the bass and other aspects of the music are in a normal time feel. In addition, this allows for easier creation of glitch rhythms in the drums. This play between half-time and normal time is one of the unique aspects to dubstep as a electronic genre.

Sparseness Is The Key

For dubstep, the empty open feel of the drums is one of the parts that makes it so unique. Often times you will just hear this one and three hit of the kick and snare as the drum part in an intro or outro in a dubstep track; however you do eventually need to add more content to the beat than just a kick and snare. By sparingly adding more notes to the drums as the track evolves you will still maintain the open nature of the drums while adding something new for the listener. If the track really starts to build in intensity it is ok for that empty feel to dissipate as a climax is approached, but inevitably you will come back to that open sparse feel.

Since the drum tracks can be so empty, when you do change something in the beat it will be noticeable to the listener. That is why you must carefully consider what you will change and when you change the drum groove. These next sections will cover the different rhythmic concepts you can use to add some flavor to the basic beat.

One of the easiest ways to keep the minimal open feel but to add some variation at the same time is to use grace notes. Grace notes in traditional music are quick notes that are played just before the regular note and are used as ornamentation. If you were to quantify these grace notes to a piano roll they would usually be 32nd notes or quicker. Since our tempo is at 140 BPM but our drumbeats feel as if they were at 70 BPM, we can use the 140 BPM 16th notes as 32nd notes. For those of you using a DAW or step sequencer that does not allow the usage of 32nd notes this is how you trick the system so it still sounds like a 32nd note. Here are a few examples of how to use grace notes in your dubstep beats...

Another hallmark of dubstep drums are the usage of triples at varying points to give the groove a swing. At some points the entire beat might have a swing to it where at other times it may have a polyrhythmic feel between a duple and triple rhythm. Just as with the grace notes, you can either do the triplets at 140 BPM or 70 BPM. If you are feeling your groove in half time the triplets at 140 BPM will feel like sextuplets and 70 BPM will feel like a normal triplet.

Please note in these examples that rhythms are in triples and not duples. In some examples the notes may seem between notes, this is because of the mix of duples and triples. Just like before here are some examples of what you can do with the triples in your dubstep drums...

You almost need to think melodically with the additional drums and create a musical phrase between all the drums. Maybe one part of the beat has a lot of contrast and another part is more unified. This process of course is easier when you have a bass line or some other melodic source to play your drums off of. If you do not have anything to work from yet, simply work it off a song you already know as if you were going to remix that song. Here are some examples of adding additional drums to the beats... 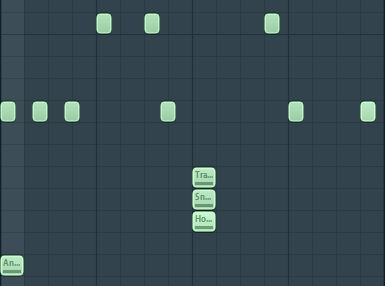 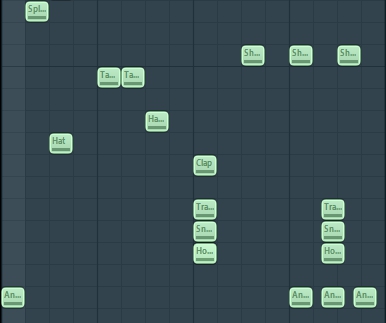 While we did not cover everything about dubstep drumbeats, the essentials have been covered. Remember to keep things sparse and build into climaxes and keep the beats chill but hard hitting. Play between contrast and homogeny in your drumbeats to create musical phrases that keep your head nodding.

If this is your first attempt at dubstep you will be well on your way to exploring more about this hot new genre. In our next tutorial we will cover how to go about making the dark soundscape for our beat to live in. Thanks for reading!