Playing the same old chords on every song can get pretty tiring and can leave a music career stale in a heartbeat. If you play G – C – D on every song without trying to even embellish it a little bit with interesting chordal work the audience will probably get bored with your guitar playing or production very quickly.

Using chord inversions is an easy way to spice up your chordal playing, and by familiarizing yourself with the different chord shapes on the fretboard you can pull yourself out of that guitar production hole you've dug yourself into.

Basically a chord inversion is the same chord but with the notes inverted. A typical C major chord has the notes C, E and G - C being the root, E being the major third and the G being the perfect fifth. So when I play a typical open C chord strum, we hear the notes C – E – G in quick succession creating that C major chord.

Now, a chord inversion is basically the same chord but with the order of the notes inverted. So if I would play the notes G, C and E it would still be the same C major chord, but an inversion of it.

Since we only have three notes in this particular chord, we can only have three different voicings, which means only two separate inversions. The first voicing being the normal C major chord, with C – E – G, the second substituting the second note in the bass, creating E, G and C and lastly the one I mentioned before, the G, C and E. See how you just shuffle the first note so that it ends up last in line? That's an easy way to visualize inversions when you have the notes in front of you.

But let's apply this to the guitar for some fun chordal harmonies.

I'm going to be taking a very basic chord progression you've seen a million times before, namely C – F – Am – G, and add some chord inversions to it in order to create a jangly chord harmony on top. This is something you can use when you're stuck in a rut in your guitar playing.

Harmonizing isn't only for Metallica solos, it can also be used to create interesting chord parts.

This is what we'll be playing over.

Ignore the drum beat which I directly copied from Ultrabeat, and don't judge me too much on the guitar sound. This is a theory based tutorial, and not so much focused on the guitar sounds themselves, which are all presets in Logic Pro 9.

As you can hear from the chord progression, it's about as boring as it can get. One way to add interest is to add some plucked chords underneath. This first example is me playing really simple chord patterns basically following the crunchy chords from the example before.

I'm plucking the chords you see here below: 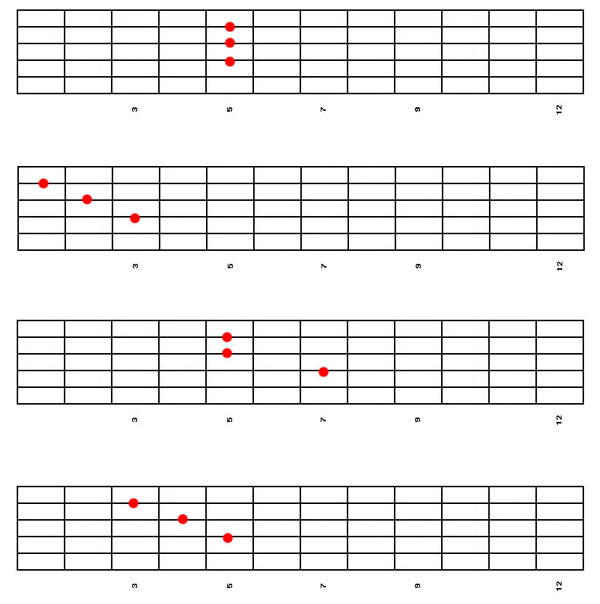 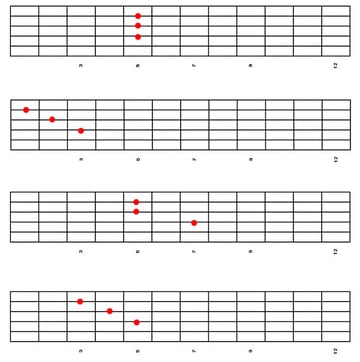 Except the first one, these chordal plucks are not inversions of these chords. They are just plucked chords going from first note to third to fifth. The first chord is actually a second inversion of C major, but since I was just following the palm muted chords from the first example I played the inversion instead. We'll get to the other inversion in just a minute.

Now, what we could do is double track the plucked chords and pan them to create depth in the track. We would just play the same thing over again and then pan each of them a little off center, resulting in a chorused and doubled sound.

Although this could work if we so wanted, it's still a bit bland and boring. We would rather want extra melodic and harmonic depth to the track which we would achieve by not only doubling the chords played but by playing inversions of the same chords.

One of David Bowie's guitarists (I can't remember who, they've been quite a few) once said that the best way to play lead was to know five different shapes of A minor. That way, you can always find a way to play a little lead when you're switching from one shape to the next.

In the next sound example I've recorded a new chordal lead line over the plucked chords. Since I know that C major also has a barred shape on the 8th fret, I can play its normal voicing there, harmonizing the C major inversion in the first example. I know that I can create a first inversion of the F chord too by playing the third, fifth and root on the 5th to 7th fret and I'm using a first inversion of the A minor chord on the 10th fret, ending in the 2nd inversion on the G chord shape all the way up on the 12th fret. 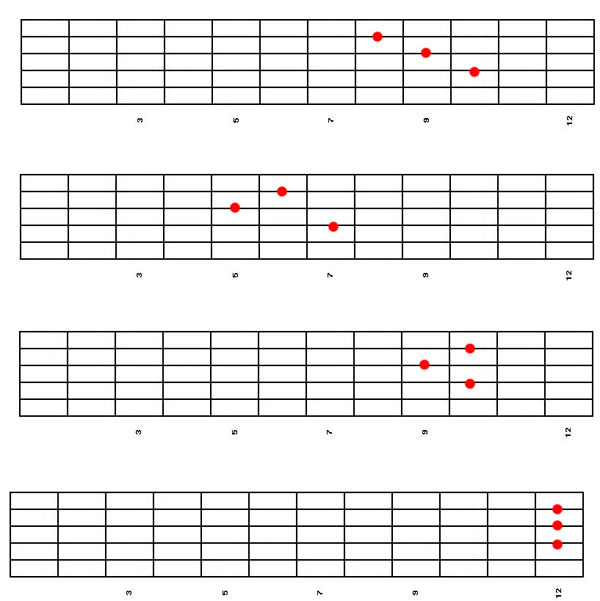 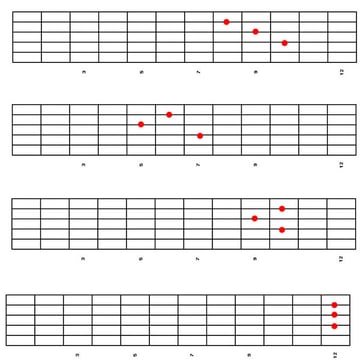 Notice that by playing the inversion, not only do we create a nice harmonic chord part, but by having the last two chord inversions rise from the 10th to the 12th fret we create anticipation. Something we could use if we were going from verse to chorus for example, to create momentum and buildup.

Send both the original lead part and the chord inversion to a separate bus each. Now insert a delay on both busses and set it to a doubled feel, with delay at about 100ms and very little feedback. I'm using Logic's tape delay so I decided to add some modulation to the signal for kicks as well.

Now by using pan controls we can pan the delay of the chordal part closer the inversion and vice-versa. I'm panning the original signals hard left and hard right and then panning the delayed signal about halfway on the opposite side of its source sound. See in the screenshot below how everything is panned across the stereo spectrum. 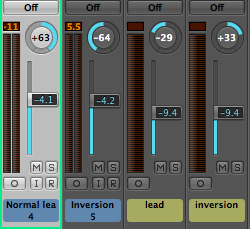 Now we've ended up with a wall of guitar sound, filled with thick chordal harmonies for that melodic effect to your guitar playing. Be sure to lower the volume of the busses otherwise the delay might come off too strong.

By knowing your way around the fretboard it's easy to create different chord shapes and inversions to get you out of a rut. Many guitarist play inversion only, leaving it up to the bass to supply the song with the actual chord progression. That way it is easier to focus on the melodic aspects of chord playing, and not get stuck strumming the same old chords over and over again.