If you are reasonably new to synthesis or find yourself relying on presets too often then it's always a good idea to get some solid synthesis technique nailed down. If you are brand new to the subject you might want to check out my two part video guide to subtractive synthesis in the 'Basix' section. You can find them here.

Back when I first got familiar with synthesis I was taught that if you are able to create a group of basic sounds from scratch, then it's very likely you can create any sound you like. We were often given this sort of test to check we were up to speed and ever since I have passed this technique on to my students.

These basic sounds included one patch from each major group including, a solid synth bass, a string, a pad, a synth lead, a percussive sound of some sort and a noise based synth effect (such as a helicopter or waves). I'll split these sounds up into separate tutorials and demonstrate how to construct them step by step. At the end of each tutorial load up the initial patch I supply and try to recreate the sound yourself.

A really straight forward way to get familiar with your synthesiser is to make some effects based patches. There are a few ways to produce pitchless effects using subtractive (or virtual analog) synths, we can use self oscillation or noise oscillators. Both approaches can work well but in this case we are going to use a noise generator as our initial sound source.

The effects produced can vary wildly depending on what sound shaping tools we employ and I'll try to demonstrate a few different variations here. I am using the ES2 synth that is bundled with Logic Pro 9 but the techniques I use here can be used in any subtractive synth with a noise oscillator (and thats most of them!). So let's get into and start to construct our patch. 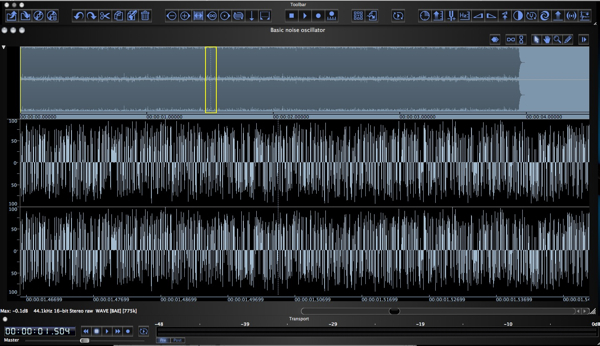 White noise can be pretty harsh but is a great foundation for FX patches.

If any of you have followed my other synthesis based tutorials on the site (and there is a few!!) you will know that I favour starting with a blank, initialised patch. I have done that here and the blank patch is available in the download pack, so you can all start from the same point when you build your own effects.

The blank patch just consists of a single saw wave, open low pass filter with no resonance. The envelopes are set with full sustain, no attack or release and there are no modulations dialled in. I use this sort of start point regardless of the synth I am using so hopefully you will be familiar with it in future tutorials. 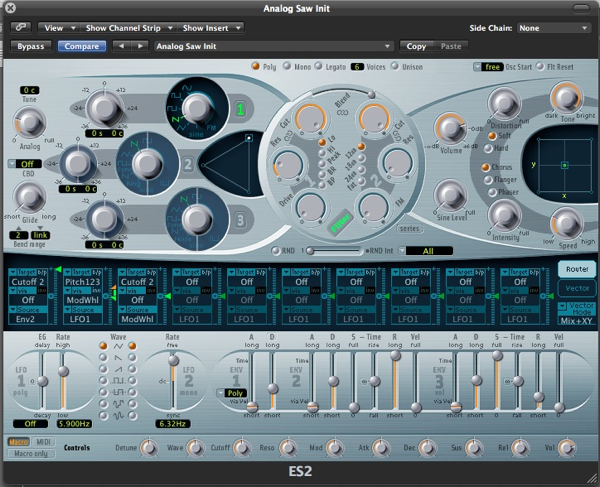 The initial patch in Logic's ES2.

So to get things going we need to start of by instantiating a noise oscillator. Every synth has a different interface and a different way of presenting its parameters, this often means that certain oscillators allow specific waveforms to be loaded. This is certainly true in the case of the ES2 and only the third oscillator slot here supplies a noise generator.

To ensure that we hear the noise generator use the triangular mixer and move it to the lower position. This will essentially isolate the third oscillator. Now select the noise function using the waveform selector. On playback you should now hear a basic noise based waveform. 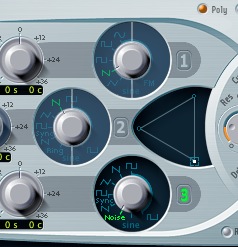 The ES2's noise oscillator is activated and mixed.

When working with noise based patches you can take things in pretty much any direction you like and as with any patch any decision you make after choosing your raw oscillators will massively effect your final outcome. In this case I'm going to demonstrate a simple effect that resembles the seashore. I'll then show how, in a few moves, you can transform the sound into something more 'hi tech'.

To get this wave/seashore like effect the first thing we have to do is emulate its dynamic signature. After picking your oscillators this is always one of the first things you should try and visualise as it will help you develop the patch. In this case we need to use a long attack and release for our wash effect.

The amplitude envelope is set up.

By simply adding these envelope tweaks the single noise oscillator is changed to something that resembles a seashore (a synthetic one at least!). This really is the essence of this exercise and I'm hoping to show you that sounds can be drastically altered and moved from one basic group (lead to pad to effect) to another with only a few tweaks. Once you have these basics down you can quickly switch from patch to another.

To add an extra touch of realism to the sound lets look at some filter and effects settings. To start with a moving, non resonant low pass filter helps add the feeling of movement. I have used one of the ES2's filters and mapped it to envelope number 2 using the mod matrix. (For more info on how a mod matrix works you can take a look at my tutorial here.)

... and then mapped to a second envelope.

This second envelope is pretty much matched with the amplitude envelope but with slightly longer attack and release times. This causes the filter cutoff to fade in and out a little as the sound develops. A final touch was to add some stereo delay, this just brings some space to the patch, reverb can work very well here too.

So there you have it, a basic noise/wave effect in only a few simple moves. In reality the basis of any patch is only this many tweaks away from my initial patch and therefore only a few tweaks away from any other sound. Once you start to look at synthesis in this light it opens up a whole new world of programming possibilities. 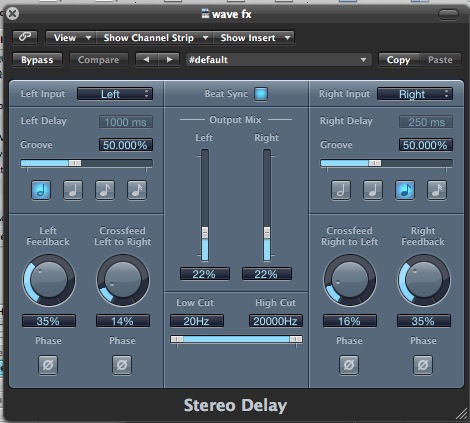 Delay is also added for some extra space.

The sound with delay.

If you are after something a little more complex here are a few sounds I made using just a few extra tweaks. 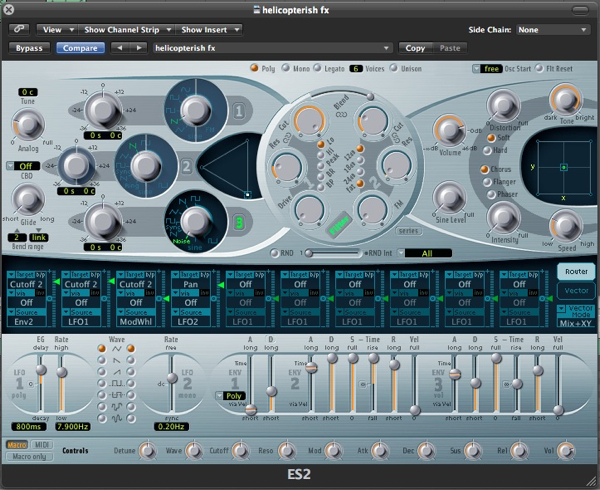 A synthetic 'helicopterish' is made with only a few tweaks of the mod matrix and LFOs. 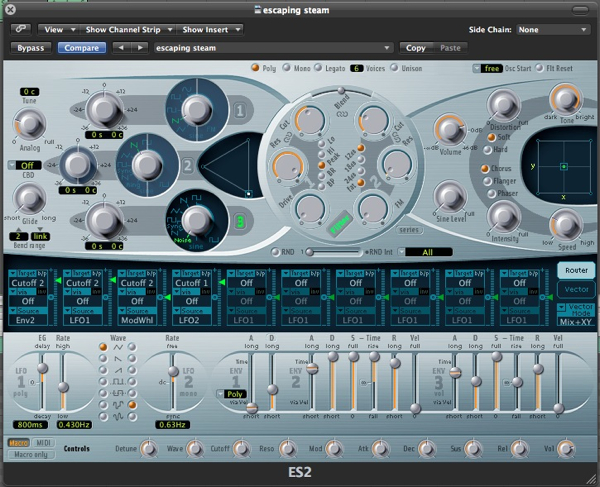 This is then transformed into a steam turbine with a few more minor tweaks.