If you followed the first part of this series then you'll know that we are looking at a group of synth patches that represent the building blocks of subtractive synthesis. In the first instalment we looked out how to manipulate a simple noise oscillator.

In this instalment we'll take a look at how to create a classic synth pad patch, an essential part of any synthesist's armoury. The last tutorial was completed using Logic's ES2 soft synth, this time around I'll be using Steinberg's Prologue. In fact I'll be using a different instrument for each instalment, to show that these techniques are truly generic in nature.

What is a pad? Well as the name suggests it's a patch thats used to 'pad' a mix out. They are more often than not used at pretty low levels and supply a lush backdrop to our music. Most synth manufacturers supply a pretty decent selection of pads as standard with their synths but often these patches can present problems when used in the mix.

To many sound designers and synthesists the temptation to create complex pads that show off the instruments feature list is often to alluring. These complex pad patches can be great to play in isolation but in the mix they are often too busy and can end up clashing with existing elements as opposed to complimenting them.

Often the best pads are simple ones as they tend to sit more comfortably in the mix. In the following steps we're going to take a look at how a basic but effective pad patch is put together and how these patches can be easily transformed into something more complex if required.

As usual I have started with an initialised patch that consists of a single sawtooth waveform, an open low pass filter and very basic envelope settings. It's always a good idea to start with a clean slate and very few modulations when creating your own patch. 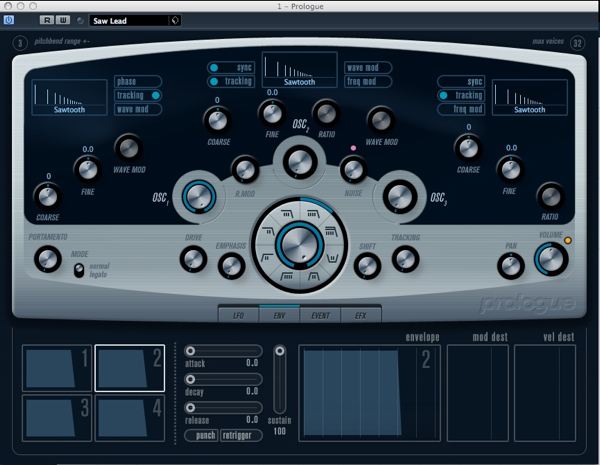 The untreated saw wave and some very basic chords.

As our pad is going to be pretty heavily filtered the choice of oscillators in not as crucial as you may think. Of course your choice will effect the amount of harmonics created and a harsher brighter combination of oscillators will give you the ability to open the pads filter to reveal a more aggressive tone if needed.

To demonstrate this and show that we can create a smooth pad from even the harshest waveforms I have opted for two straight saw waves here. As there was already a saw wave present in our initial patch it was simply a case of adding a second.

These saw waves were then detuned to create an instant unison / chorus effect. This is great for creating depth and works perfectly for our pad. If you wanted to create a more complex, harmonically rich pads you could add a third oscillator of a different kind but to keep things simple here we'll stick with two.

The same chords with the two detuned oscillators

The core of a good pad sound is its dynamic signature. Simply put we need a long attack and long release, these two qualities combined automatically give us the traditional signature of a pad or string. With these set the patch plays like it should with a long, trippy feel. With this sort of envelope setting the timing of the patch is very forgiving and most sequences sound pretty good, perfect for adding extra parts to any track.

With these simple envelope values dialled in we are really starting to see the pad take shape but currently everything is just too bright and upfront. Let's take a look at some filtering to sort this out.

The amplitude envelop in place

The chords played with the new envelope

To give our pad a traditional mellow feel we need to apply some pretty heavy filtering. We'll be using a low pass, slightly resonant model to remove a large amount of high end from the sound. This will then be modulated by a dedicated envelope to add some dynamics.

So with out low pass filter chosen the cut off is decreased pretty drastically to remove all the 'sharp' edges and a healthy dose of resonance is added to introduce some warmth and harmonics. I have also utilised the 'drive' circuit that Prologue features, this adds further harmonics and some saturation. Other synths may not have this feature but there are plenty of saturation plug-ins out there that can achieve the same results.

The patch with the filter and envelope activated

Step 5: Some Light Modulation and Effects

Our patch is now resembling a classic pad sound and is pretty much usable in its current state. To finish it off and give it an extra edge and some dimension let's add some light modulation and a few effects.

Our modulation is a simple slow-moving sine wave based LFO effecting the filter cutoff, this gives the sound an evolving feel and keeps it interesting over time. After this I added some built in delay and chorus from the synths effects sections for extra dimension. If your chosen soft synth has no effects section, get those plug-ins out! 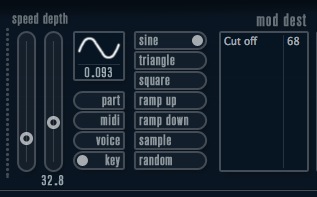 The LFO used to modulate the filter

... and some dimensional effects

The patch with modulation and effects

As you can see going from only a simple single oscillator to a fully blow and usable pad sound is extremely easy. You should find now matter what synth you are using that you are only really a few moves away from creating this sort of patch.

The patch being played with a beat

Once this is mastered you have one of the essential building blocks of synthesis under you belt and from here you should be able to create much more complex and involving string and pad patches. Look out for more on this in future tuts!

The patch being used at the start of a project