Getting More From Your Tracks With Delay

Delay is a simple device with a wealth of possibilities for adding interest and production value to your tracks. This tutorial will examine different ways that delay can improve the sound of your music and inspire creativity.

A simplified explanation of the settings we'll be playing with:

A classic example of delay is a "slapback" effect often associated with music from the 50s and 60s. The slapback is a short echo that makes the affected sound seem thicker. Let's begin with a simple electric guitar riff:

Now we'll instantiate an Echo effect on the guitar track. I chose the Echo because the parameters are so simple to use, but any mono delay should work just fine. Here are the settings I chose: 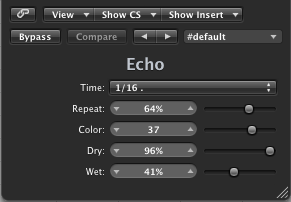 I set the Time to the lowest possible setting (16 . ) because we want a very quick echo that is almost indistinguishable from the original sound. Next I set the Wet signal to 76%, almost as loud as the original but backing off a tad so the original attack is the strongest part of the sound we hear. Changing just those two parameters gave me the sound I was looking for so I had no need to mess with it, leaving the Repeat, Color and Dry settings to their default positions.

The guitar with Echo came out sounding like this:

Not a huge difference in the sound, but it's a little bit thicker and now sounds a little more like a vintage surf guitar. The example I used for this sound is a retro-60s vibe, but you should experiment with modern uses too. Here's an example of the echoed guitar in context:

Delay can be used to add fullness to the elements in your mix. I'll often use this effect for guitar tracks to create a thick bed of guitars. The concept is that you have one instance of your track hard panned to the left, with a second instance hard panned to the right with a very slight offset. The result is a very full sound that still feels like it's functioning as one instrument. Here's a basic acoustic guitar track:

I'll add the Sample Delay to the track. The Sample Delay plugin takes care of the hard panning left and right for us on one track. You could just as easily get away with the same trick by using two audio tracks, but this saves us that extra hassle. Here are the settings used:

Simply using my ear until it felt right, I've kept the left signal at 0 and offset the right signal by 533 samples. This isn't an exact science, you want to delay the sound enough to give you the doubling effect, without delaying it too much and making it sound messy. Here's how the guitar sounds with the effect:

One of the most common uses of delay is to add a sense of ambience and space to a lead sound. A subtle touch of delay that is almost felt more than heard can really help an instrument settle in with the rest of the mix. Here's a simple electric piano line with no delay:

The delay settings used for this are my default Stereo Delay settings. I have the Stereo Delay set up on an aux track and use sends from my individual elements to that aux. You could just as easily instantiate the Stereo Delay on each track, but then you would need to fuss more with the Dry/Wet settings. The Stereo Delay allows us to have different lengths of delay on each side of the stereo field, adding a touch of complexity to the sound. The right side repeats the sound every eighth note, while the left side repeats it only every quarter note. Both settings have a feedback of 35%, which will give us a few repeats but is not too a high a setting so the delay won't go on forever. Because this delay is set up on an aux track and gets the amount signal from a send, the Wet signal is set to 100%. 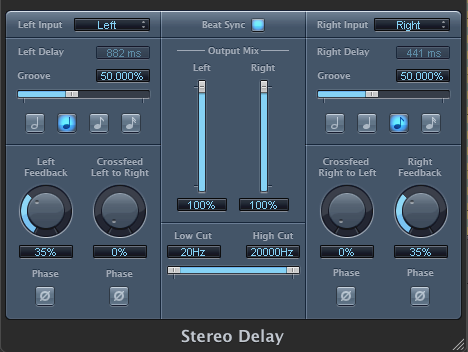 When we send 100% of the electric piano track to the Stereo Delay it sounds like this:

Here's an example combining that uses the elements from Stereo Delay and Stereo Doubling:

Just to spice things up I'm going to split the track between the left and right signals by setting up a second instance of the guitar harmonics patch and panning hard left and hard right. The original track looked like this: 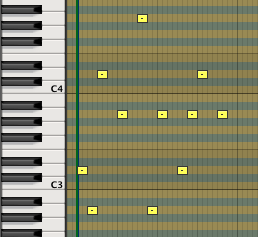 I've now split the track up into two parts. Deciding which notes went to which side was somewhat random, just trying to get an even sounding balance in the stereo field. 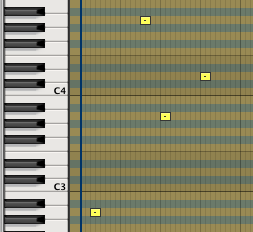 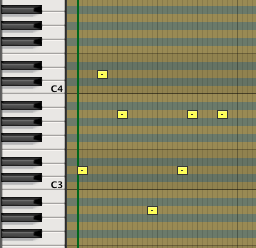 The track split into stereo now sounds like this:

Using the same Stereo Delay settings as before I'll send 100% of the signal through the delay and end up with this much fuller sound:

That fuller sound can now function as the foundation for a track, as heard in this example based on an old 19th century hymn:

Using a very similar technique as the previous example, I'll use the stereo delay to add complexity to a basic rhythm track. Here is a simple clicking pattern (the sound is a pencil tapping on a task):

Continuing with the same default settings as before we get a slightly more complex sound:

This effect is rather subtle, but it adds a touch of interest as can be heard here:

There are countless other ways that you can use delay to add uniqueness to your elements and fill out your mix. These examples should give you an introduction to the potential of delay and get you started using it in your own creative ways.