Getting The Ultimate Guitar Sound – Part 4

Every guitar player, engineer and producer wants a great guitar sound when recording a track, but sometimes finding it isn’t all that easy. In this series, based around my new book The Ultimate Guitar Tone Handbook (written with Rich Tozzoli), I’ll outline why acoustic and electric guitars, amplifiers, speaker cabinets and effects sound the way they do, and the best way to record and mix them after you’ve gotten the sound.

Also available in this series:

Unless you’re totally an old school purist, most guitar players use a variety of foot pedals as a means of modifying the sound of the instrument. The problem is that sometimes a pedal or effect is purchased solely on reading an advert or an artist interview without knowing too much how the new pedal can help your sound. In Part 4 of this series, we’ll take a look at numerous effects that are common to a great guitar sound, as well as some of the downsides that comes with adding them to the signal chain.

It wasn’t that long ago when most engineers were pretty down on guitar players using their effects pedals, especially when it came to delays and compressors. “Let me do it in here," became a commonly heard phrase that left guitar players shivering in terror at the prospect of losing their sound. That’s mostly changed these days as most engineers would now prefer the guitar player to get the sound at the amp and just capture that. That said, it still pays to have the tidiest signal chain possible in order to keep the noise down and the recording clean. Here’s how to do it.

A couple of the common negative side effects that occur with some stomp boxes is how much they change the sound when you don’t want them to. Here’s what happens.

Tone suck is a term that means the tone of your guitar changes by simply inserting a pedal in between your guitar and amp, even if it isn’t turned on. The reason this happens is because your guitar signal still runs through some of the pedal’s circuitry even without the effect switched in. That circuitry degrades the signal either by changing the frequency response a bit, or by decreasing the volume a bit. Either way, this is not something we want if we’re to maintain that great tone that we hopefully started with.

There are two answers for this:

True-Bypass means that when the effect is switch off, the signal totally bypasses all the circuitry so the pedal has zero influence on the sound as long as it’s not switched in. This is a rather recent development in the grand scheme of pedal building (since about the late 90’s) and just about all boutique pedal manufacturers use True Bypass as a sales feature these days.

Bypass via a switching network. Sometimes you have an effect that you just can’t live without but you hate what it does to your tone when it’s bypassed, so the only thing to do is bypass it externally with a switching network. These systems can be small and relatively inexpensive (like the GigRig Pro14, Voodoo Lab Pedal Switcher, Commander and Ground Control, the Carl Martin Octaswitch and the TC Electronic G-System) or highly sophisticated like those from the famous Bob Bradshaw (click here to see a video about his switching systems and pedalboards). 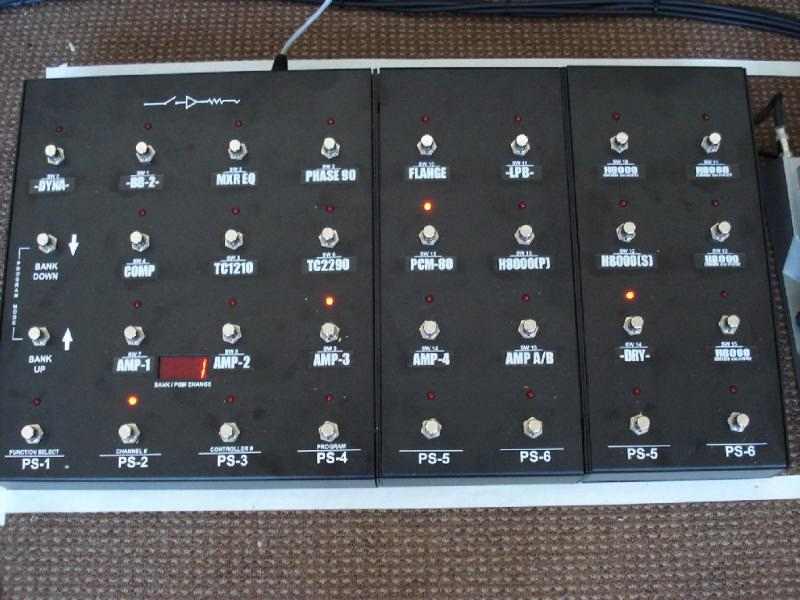 One of the problems with true-bypass is that it gives the illusion that the volume and tone of the signal won’t ever change, but that’s not necessarily true. If you have a 15 foot cable from your guitar to your pedalboard, a one foot cable between each of your 15 stomp boxes, and another 15 foot cable to your amp, that’s 45 combined feet of cable, which will degrade your signal! There are ways around this with buffers (a unity gain amplifier) and loop-switching systems like the ones mentioned above, but many players never consider the consequences of just what could happen by the simple fact of connecting all those pedals together.

The next problem that happens with effects in the signal chain is the noise buildup that occurs when you switch them on (or even when they’re switched off if they don’t have true bypass). This can be anywhere from a slight escalation in the noise floor to the sound of a full-on hurricane, depending upon the gain of the device or devices. There are three reasons why this happens.

Each device adds a bit of it’s own inherent noise. Some devices are designed better than others (they’re usually more expensive as a result) and keeping the noise floor down is one of the byproducts of a better design.

The type of power being used. Although many effects can run on a 9 volt battery, they’re actually designed for 12 volt use. If you use an external AC supply, the noise level can drop considerably. Be aware that the noise floor can also rise in some pedals as the voltage drops from a weak battery.

The input stage of the amplifier. A typical amp input stage is looking for the relatively small signal coming directly from a guitar, which it will then boost up as much as 50 times. If the gain from a pedal is cranked up, it will still be boosted by that 50 times despite where the volume control is set at on some amps. This means that your noise floor just went down the drain.

There are two things that will directly affect how your effects interface with your amp; the effects order and gain staging. Effects order means the order that each pedal appears in the the signal chain between the guitar and amplifier. There are several schools of thought on effects order, and they each have a different result.

This effects chain is the order generally recommended by most of the pedal gurus. There are several rules that make up this order:

Any modulation or tone devices like wahs should come next. This enables you to keep the sustain coming from your distortion or overdrive devices and alter an already harmonically rich signal.

Delays come almost last in the chain, since you want to be delaying your already effected signal.

A volume pedal comes either last in the chain, or directly in front of any delay.

In situations where a pedal is providing a lot of clean gain, that will come last in the chain so as not to overload any of the other pedals.

While this might not be the quietest order, it does sound really good because any distortion, overdrive, or sustain is being affected by the effects that come behind it.

If we’re talking about recording, we may want the least amount of noise going into the amp. With that in mind, there are two rules in this scenario:

The noisiest pedal goes last in the chain before the amp.

The one with the most gain goes last before the amp.

The reason for both of the above points is simple; if the noisiest pedal is first in the chain, that noise will be affected and amplified further by every other pedal in the chain that you switch on. Same with the pedal with the most gain; if it’s at the beginning of the chain, it could possibly overload any other effect that comes after it, since most pedals only want to see a typical guitar signal and nothing greater (see Figure 4). Also, any noise caused by increasing the gain on a pedal will be amplified downstream by any other pedal switched on.

Generally, you’ll try to keep the basic order as in School of Thought #1 in order to be sure that any distortion or sustain is affected by the effects placed later in the chain. That being said, this order won’t sound the same as Order #2, especially if a distortion pedal is placed last in the chain (which isn’t recommended) because of its gain, so it might not be for everyone.

Proper gain staging means adjusting the gain of each effects device to keep the noise at it’s lowest and prevent overloading of any device after it. Since almost all pedals have output gain controls these days, the best way is to adjust all the output controls so the gain is exactly the same whether they’re switched on or off. If you’re running a distortion or overdrive pedal, put that last in the order, and increase the output level of that one pedal up to the sound that you like (see Figure 5). 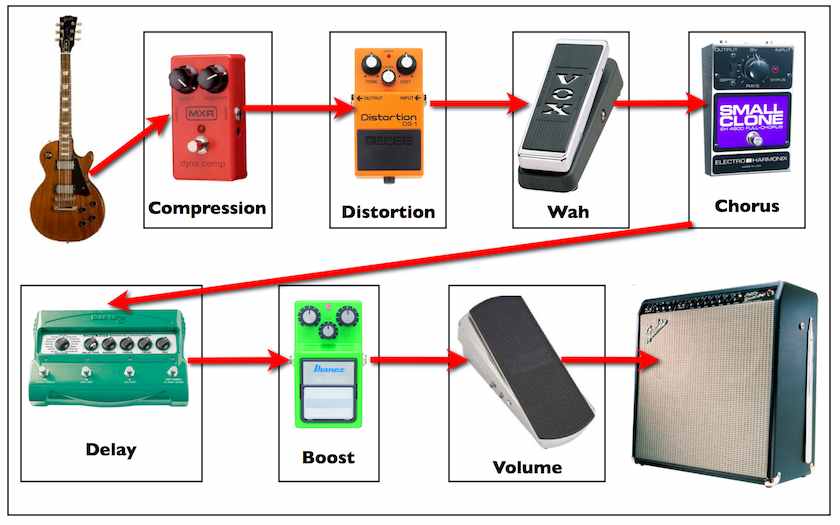 If you follow the above suggestions, you’ll find that your signal chain should clean up quite a bit and your recordings should benefit greatly as a result. In Part 5 we’ll get into the details of electric guitar miking techniques.

Bobby Owsinski
A long-time veteran of the music industry, Bobby Owsinski has produced and composed for records, motion pictures and television shows along the way. Currently a principle in the content creator 2B Media, Bobby has also penned hundreds of articles for many popular industry trade publications and has authored several books that are now staples in recording programs in colleges around the world including “The Mixing Engineer’s Handbook”, “The Recording Engineer’s Handbook”, “The Audio Mastering Handbook”, “The Drum Recording Handbook”, “How To Make Your Band Sound Great,” and “The Studio Musician’s Handbook.”
Weekly email summary