Getting to Grips with Modulation Mapping

For some synthesists the subject of modulation mapping is one to be avoided. It's hardly surprising considering the average mod matrix is made up of tables, graphs and numbers.

In this tutorial we'll look at the mod matrix on a few synths and some real world examples of them in action. If this is in area that remains somewhat of a mystery to you, hopefully this step by step guide will clear things up a little.

Step 1 - What is Modulation Mapping?

Modulation mapping is a term used since the days of modular analog synths and really just refers to the practice of using one area of a synthesiser to change or 'modulate' another. These modular monsters of yesteryear actually utilised wires to connect each section or 'module' of the instrument together. These systems were highly complex but of course almost totally customisable, so in the right hands the results were practically limitless. 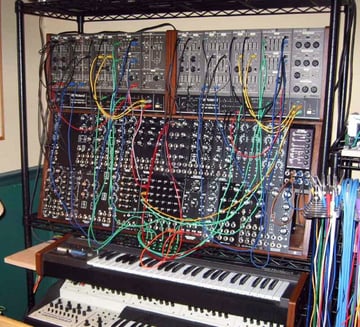 Highly complex modular systems are to thank for the mod matrix.

Of course synth design has come along way and we no longer have to deal with endless reams of wire to create our own patches, most of the modulation sources and destinations are actually hard wired. This pre fab routing came about through synth designers realising that most of us modulate certain parameters much more than others. For instance using an LFO to effect the pitch and thus creating vibrato is something that a lot of us do on a regular basis.

Through this evolution of design synths now feature hard wired knobs in each section of the instrument pointing to common mod sources. For instance, most synths feature an envelope mod control in the filter area and often an LFO mod feature here as well.

Most modern synths have a good choice of modulation destinations hard wired.

Now these controls are pretty good in most situations when putting together basic patches but when you start to build more complex patches, you can find you are somewhat limited by these hard wired parameters. So, whats the answer? The answer is the mod matrix my friends, so lets get stuck in.

The modulation matrix is basically a system for mapping controllers to various destinations on your synth. In offering multiple sources and destinations the mod matrix provides the user with an amount of control similar to that of a modular system. This sort of freedom allows us to build more complex involving patches that would be be pretty much impossible with a few limited modulation controls.

Not all instruments have a mod matrix included in their feature set and you may need to turn to more advanced synths to find one. For instance in Logic you will have load up the ES2 as opposed to the simpler ES1 and in Reason you should head for Thor rather than the simplified Subtractor. I'm sure you get the picture, the more complex the synth the more likely it is to feature a fully blown mod matrix.

When first accessing the mod matrix it's easy to see why some people maybe hesitant to get involved. Usually made up of a large repetitive grid, the matrix often only contains numbers, faders and menus. Not particularly exciting compared to the resonance and drive sections in your average filter! 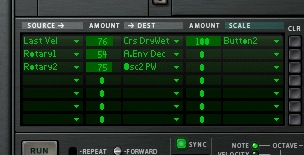 Of course the design of the mod matrix differs from instrument to instrument but the basic principle remains the same throughout. You will usually have a target parameter, this is the control you wish to effect. You will then have a source parameter, this is the parameter you will use to create the change (or modulation). There will sometimes be a via point or modifier between these but we'll come to this later. 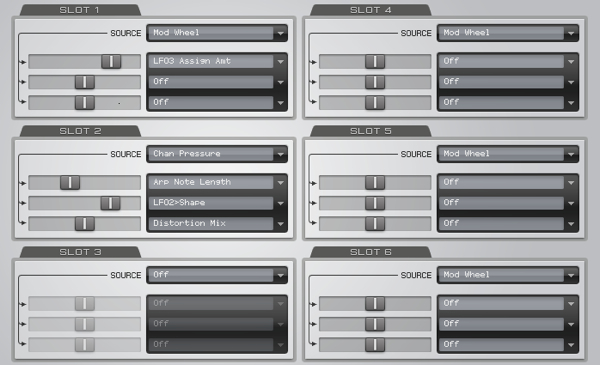 The Virus Ti's mod matrix differs in design but in use it remains the same.

Each section will also contain one or more value faders to control the amount of modulation occurring. Once you get the hang of one of these 'slots' you will soon realise the mod matrix isn't as complex as you may of originally thought.

It's worth exploring the drop down menus in the source and target areas at this point to familiarise yourself with the parameters available. Even a quick glance should reveal the majority of parameters within the synth and you'll soon realise the power available here. 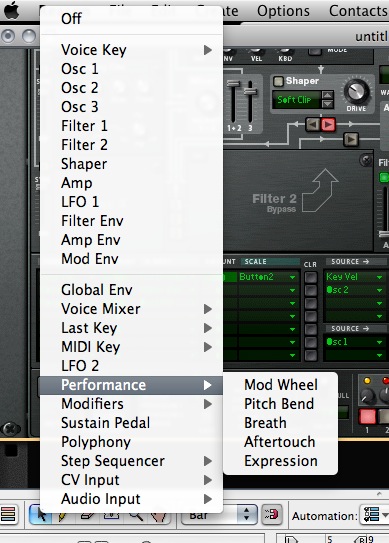 Now we have the basics of the mod matrix under our belt we can move on and start to create some mod maps. Let's start off with something simple and create a connection that you are probably all familiar with. Modulating the filter with an LFO is pretty straight forward and is something that most synths can do as standard.

Simply select the filter cutoff as the target and the LFO you want to use as the source. Now by dialling in some amount on the main fader you should start to hear some modulation occurring. Now by fine tuning both the LFO speed and the filter cutoff you should be able to get the sound you're after. It's really that simple and is pretty much the same as using a dedicated control in the filter section.

Selecting the right parameters in the mod matrix.

Getting the LFO speed right.

Once you have completed this first mapping you can move onto more unusual routings and try modulating targets that are not usually available as standard controls. For instance try modulating the FM amount with an envelope or change envelope amounts with an LFO.

Step 4 - Hardware Control and Via Points

The modulation matrix is also a great way to implement control from an external hardware controller. For instance using the via points that are present in most instruments, you can easily inout the mod wheel, velocity or even aftertouch as a modifier. What this means is you can map a modulator as normal but the external controller will now effect its intensity. Great for controlling vibrato, filter effects and other performance based controllers. 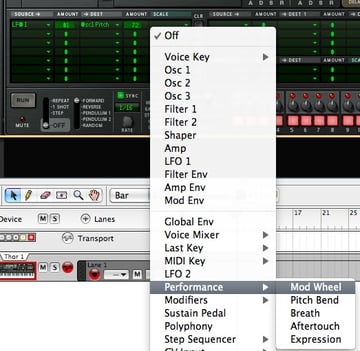 Setting up a hardware controller in Thor's mod matrix.

Other interesting hardware modulations can be used here such as unused MIDI controller numbers, these can then be used in conjunction with a MIDI control surface to access difficult parameters. Also try using velocity and aftertouch to add extra expression to a sound. Remember you can use more than one of these via points, so don't limit yourself and try complex multiple routings.

As you can see using a modulation matrix really isn't that hard and its more about understanding the concept than anything else. If you are confidently creating mod maps and including the mod matrix as part of your general work flow you might want to try some more complex moves.

One of the best things to try once you have built your confidence is changing the speed of LFO's over time. Rather than the traditional modulation mapping you are used to try mapping Envelopes to LFO's, or oscillators to LFO's. This will change the speed of the LFO (or the wave-shape) and will give you a warped sound that can be pretty random and crazy.

The envelope causing the change in the LFO's speed.

The modulated sound in Thor.