In this series we will learn about altered chords and how we can use them to add harmonic interest to our music. Part 5 of the series will continue with the altered VII chord.

This is the fifth article in a seven part series on altered chords. In the first part I explained that by lowering or raising a tone of a chord by a half step you can change the color and function of a chord.

The seventh diatonic chord in a major key is a diminished chord. In the key of A it's G#º (pronounced G-Sharp diminished). If you add the seventh (a minor seventh above the root), you get a minor seventh flat five chord (m7b5), also known as a half-diminished seventh chord. (Note that a "diminished seventh chord" is built entirely of minor thirds, thus it has a double flatted seventh. A Cm7b5 chord is C-Eb-Gb-Bb but a Cdim7 chord is C-Eb-Gb-Bbb, enharmonically C-Eb-Gb-A.)

It's the most awkward chord to explain theoretically in the context of the other diatonic chords, but in most traditions it's harmonic function is considered that of a dominant chord.

It's considered dominant because it's root is the leading tone (7 of the key leads into 1) and the root and diminished fifth of the chords create a tritone that have a strong tendency to resolve. Because it lacks the sturdy root of the V chord, it is not as strong as the main dominant chord.

The vii chord is used much more often in classical and jazz than in most contemporary pop or rock styles. Here's an example from Mozart's first Piano Sonata:

In this instance it's being used as a passing chord just resolving to iii.

Another way to use the chord would be as the ii from a ii-V progression in a minor key, such as Bm7b5-E7-Am:

The most common alteration of viiº is the bVIImaj7 chord, a major seventh chord borrowed from the minor key. Although other alterations can add color or passing tones, they are found somewhat rarely.

As explained in the previous tutorials, a chord is "altered" by lowering or raising one or more chord tones by a half step. Since there are four pitches in a m7b5 chord (or half diminished 7th chord) that gives us four choices for tones to alter, 1 b3 b5 b7.

We'll go through one chord tone at a time and examine the results of altering each of them.

The most common non-diatonic vii chord you'll hear is bVII, a major triad with the root of the chord lowered by a half step. It is borrowed from the Mixolydian mode.

So for example, in the key of C major we take the diminished seventh triad, B-D-F, lower the root by a half step to give us Bb-D-F, and we have a Bb major triad. Lower the root of a Bm7b5 chord and you get a Bbmaj7 chord.

bVII can be used in a variety of ways, and is commonly either a departure from I or the last chord before I.

For example you could have a progression that goes I-IV-bVII-I:

Or slightly varied would give you I-bVII-IV-I:

Also, because of the lowered root bVII has a slight sense of calming. Sharps tend to increase intensity, flats tend to reduce it.

Consider I going to bVII. Even though the melody in this example goes up, the general energy doesn't really rise: 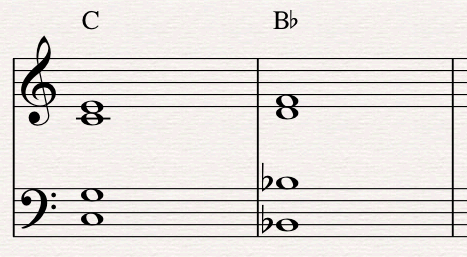 Alternatively, listen to I going to II major. Even though the melody goes down, the energy level goes up quite obviously: 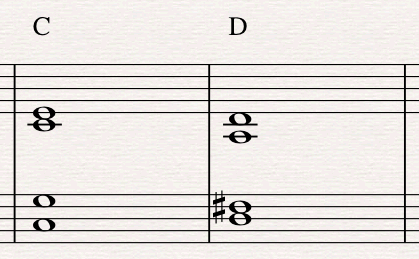 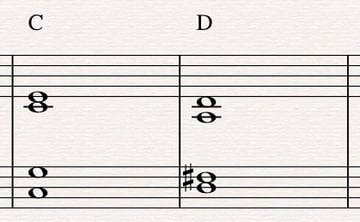 This suggests that the root movement has more influence on the increase or decrease in energy than the direction of the melody.

A song that uses IV-bVII-I is 'For No One' by The Beatles. The Bb is taking the place of what would traditionally be the V chord, a G in this case. But even though the bVII is technically less "tense" than V, we still feel a sense of arrival and relaxation when we make it back to I:

Because of the Ab in the melody, the chord is Bb7 and not just a Bb triad.

A song that uses the bVII as a substitute for V is the theme from How I Met Your Mother. The progression is: I V6* vi V IV I6 ii bVII I

If a diatonic chord was used instead of bVII, it would probably be the V chord with it's third in the bass, or E/G#. Listen to how this still makes sense, but is much less interesting:

As for all chords whose root is a half step below another diatonic pitch, raising the root of a vii chord essentially changes it into a ii7 chord in 3rd inversion. If you change B-D-F-A to C-D-F-A, you have Dm7 chord with 7 in the bottom.

It's a lovely chord (listen to the first four bars of Bach's Prelude in C Major), but it is now a ii chord and no longer a vii chord.

Because of the unusual nature of a diminished chord, altering it's pitches usually transforms it into a different chord function, much like the previous example from raising the root by a half-step.

If we lower the fifth, we lose the tritone from the chord, one of it's defining characteristics. To me this chord seems more like a iiisus chord than any kind of vii.

Raising the fifth changes the chord into m7. Functionally this would probably make the most sense to be part of a ii-V, resolving to VI.

Lowering the third of a m7b5 chord gives us a pretty interesting, dissonant chord. To my ears it sounds like a +7 chord with the seventh in the bass.

It has a very dominant sound with an urge to resolve. One way I might use this is as a way to modulate from C major to E major:

Because C# feels like the root of the chord, it feels like it wants to resolve to F#m, which then can be used as the ii chord in a ii-V to E.

Raising the third also gives us a dominant chord, but this time the root of the chord maintains its role as the root. The chord becomes a V7b5 chord, which diatonically has a strong urge to resolve to iii:

An interesting effect can be created if you lower the seventh but also raise the third.

In essence I think the chord changes to a sort of IV chord, in this case maybe we could call it IVm7b5.

It has a very sweet and romantic sound which could be great for a gentle ending:

Notice that every pitch from the Fm7b5 resolves by a half step to a pitch from the C triad. This can be thought of as a variation of, or alteration to, the whimsical I - IV - iv - I progression that is somewhat common to pop styles:

Raising the seventh gives us an unusual chord, a diminished maj7 chord. Unless you happen to have the right context, it's a bit dissonant and weird for my taste:

If this chord ever came about I think it would be organically, perhaps from a linear design where the voice leading ended up here, rather than as part of a functional chord progression.

As I mentioned earlier, the vii chord doesn't get used very often these days. If you hear a m7b5 chord, it's more likely being used in a II-V-I pattern, for example Bm7b5 - E7 - Am.

Some of the alterations of vii can be useful, although they will probably work best when used sparingly for a little extra spice. On the other hand, the bVII chord is quite common, and one that you may have already found yourself using already.

Next up in the series will be the altered IV chord.

Please leave your comments and questions below and we will continue to discuss them in the future parts of the altered chord series.