Reason’s Mixer is one of the most important devices in the software, but most home musicians don’t pay much attention to it. It’s simple enough to get your head around the basics of leveling devices with a bit of experimentation, but in this tutorial we’re going to go further into the breadth of features this essential and under-appreciated device offers.

In true Propellerhead fashion, as they’ve shown with both Reason and the newer Record software, their design ethos is to imitate not just the look and feel but the functionality of physical audio equipment. If you’re used to working with other DAWs, Reason’s mixer might be more unfamiliar to you than if you’d gotten used to a physical mixer. In fact, people who’ve read my Plus tutorial on understanding mixers may not need to read much of this tutorial at all!

The Mixer is made up of 14 stereo channels, each with identical parameters. The beauty of digital mixers is that it doesn’t matter how many channels each device supports, because you can add more! We’ll discuss how you can do this later. Here’s what a channel strip, without any settings altered from the defaults, will look like:

There are five main elements of the channel strip.

The Master Fader: As far as most people are concerned, the most important part of the channel strip. The master fader allows you to control the level of each track, and is the main tool used in creating a mix and balancing all the sounds together. A flat value in Reason is marked at 100 (with a minimum of 0 and a maximum of 127, as with all MIDI-based values) where other DAWs would be set to 0dB.

The Pan Control: This is the knob above the master fader, marked with an L and R (for left and right). This allows you to choose a location for the sound in the stereo field. This helps make the music sound more natural, as if the instruments are all part of a real acoustic environment.

The Mute & Solo Controls: Most DAWs have mute and solo buttons on both the track headers in Arrange mode (or Sequencer mode) and the same buttons in their Mixer. With Reason, the Mixer mute and solo devices affect the output of the attached device while the sequencer mutes or solos MIDI data. The result is the same, but the method is slightly different.

Basic EQ: Generally you’ll want to achieve the equalized sound you want using an equalizer on the device, or alternately in a ReWired DAW, but maybe you just want to shave off a little low end without compromising an EQ you’ve worked hard on. That’s why the Reason mixer has two pots to trim EQ — one for treble and one for bass.

Aux Levels: You can wire send/return effects through Reason’s Mixer, and the aux levels allow you to determine how much — if any — of the track’s signal you want to send to the effect device. There is a pre-fader toggle for the fourth aux.

Understanding the Back Panel

The back panel of the Mixer allows you to change the default wiring Reason implements when you create new devices. There are many reasons you’d want to do this, from creative reasons to signal flow reasons. Here’s what it looks like:

There are three sections to the back panel. The first is the routing for each of the channel strips. To the right of that, we’ve got the Aux Send Out and Aux Return assembly. And on the far right, there’s master left and right outputs.

The channel strips feature left and right stereo inputs, and control voltage inputs and sensitivity trim pots for Level and Pan. When connecting a mono sound source to the Mixer, attach the device’s output to the Mixer’s left input. What you use to modulate the Level and Pan parameters, if you do at all, is up to you and your creativity.

The aux connections section allows you to set up send/return effects, and this is something I’ll show you how to do manually in a moment (though you won’t often need to do this manually — Reason’s auto-routing is fine in most cases).

There are also chaining Send In and Masters for adding further mixers, with the most popular configuration making one mixer the master mixer and the rest simply providing extra channels.

The Master Outs simply send your left and right master signals to hardware — usually with a detour through the MClass Mastering Suite Combinator.

To show you how to create a send/return effect in Reason, we’ll start with a disconnected reverb unit:

First, you need to tell Reason where to send our instrument signals through the Aux Send Out ports. Click and drag on the Left (Mono) port under the column 1 on your Mixer and connect it to the left Audio Input of the effect device. Reason automatically wires the right cable for you.

Now, drag a cable from the left Audio Output of the effect device, and connect it to the left input in column 1 under the Return section.

Press Tab to flip the rack around, and set the effect levels using the labeled pot under the RETURN label on the right side of the Mixer.

Each channel strip will have an Aux knob with a corresponding number to control the track’s outgoing level. Tweak this until you have the desired amount of the effect in the mix.

To connect the master faders so that the first mixer controls the second mixer’s fader, simply connect the Master Outputs of Mixer 2 to the Chaining Master of Mixer 1:

To make Mixer 1’s send/return effects available to the channels on Mixer 2, connect the Aux Returns of Mixer 2 to the Chaining Aux Send Ins of Mixer 1: 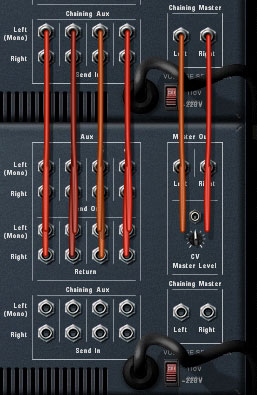 Propellerhead have really made this an easy process. Even better is the fact that by creating a Mixer, it’ll automatically be chained to the one prior to it, but in order to tweak this setup you need to know how to create it yourself and why certain cables connect to certain ports.

The downside is that there is no way to cause the mute and solo buttons on one Mixer to correctly effect the playback of the others.

If you want to create submixes, one method is to use a Mixer for each submix, get the mixes right, fold them up so they’re out of sight, and then tweak the main levels on the master mixer as necessary (you can easily go back and change things in the submixes as you go). With submixes, we can chain the aux effects without chaining the output.

If you want to make the same effects from Mixer 1 available to your submix, chain the mixer effects as shown in the previous section by connecting the submix’s Aux Returns to the main mixer’s Chaining Aux Send Ins. If not, just create send/return effects on that mixer as you normally would.

Then you simply need to take the master output of your submix mixer and route it to one of the main mixer’s channel inputs:

EQ Modes Or, Why Do My Older Songs Sound Wrong?

If you’ve been using Reason for a considerably long time, you might’ve wondered why you’re older songs can sound a bit strange now that you’ve upgraded. This is because at some point in Reason development the EQ algorithms were changed to improve their quality in general. To play your older songs normally, simply press Tab to flip to the back panel and change the switch in the lower left corner from Improved EQ to Compatible EQ.