Give Drums Impact with Parallel Compression

It seems that the more elements your drum mix is comprised of, the harder it is to give them impact. With mics on the majority of drums, plus overheads, room mics and even the occasional hallway mic, there are so many different sounds competing with each other, even though together they comprise one instrument. Parallel compression is a really easy way to give some impact to the most important elements of the kit.

Once you’ve got your drums recorded, do a basic mix and try to get the levels where you want them. You want to get the best relative mix between the elements of the kit that you can — don’t despair too much if the kit as a whole is not as strong as you’d like it to be at first, since that’s what this tutorial will teach you to fix.

At this point, with a relative mix done, solo each track and fire up an EQ plug-in. Listen to each sound carefully and boost and reduce frequencies as you feel necessary. If you’ve done a great job of recording a great kit in a great room with great hardware, you may not need to do this, but usually you will.

At this point apply compression to your drum tracks to keep the peaks down and to prevent drum sounds from totally disappearing after mixing to a particularly loud section. That said, keep the compression as light as you can, because our aim is to ensure that the majority of our kit sound is a natural one with very little compression so we can pull up the parallel compression auxiliary as necessary to fortify it. 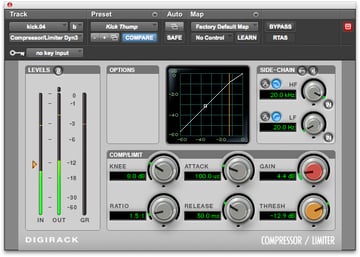 Got to Track > New… and set up two stereo auxiliary tracks. Click and hold on the input selector and choose a free stereo bus for each. Now’s a good time to name each appropriately — the first can simply be Drums while the second might be Drums Parallel or whatever will remind you of the track’s purpose quickly.

Set the output on each drum track to the first auxiliary track’s bus input. This is your main drum level controller. At this stage it may be wise to solo the main drum aux and check your relative mix without any processors applied to the group aux. Ensure that there are no peaks showing on it and check that you haven’t missed any level adjustments you should’ve made after applying EQ and compression.

With your drum aux still soloed, have a close listen and decide which drums are lacking in punch that need to be more upfront in the mix, and also have more impact and tightness. Create a send on each of these tracks to the second aux. Unsolo the first aux and solo the second so that you can get the mix right with the send faders.

An alternative method is to create a send directly from the drum auxiliary to the compression auxiliary, but I like the ability to choose which drums are given that extra oomph, especially since most of my projects have a larger number of drum tracks recorded.

Set up a compressor on the second auxiliary. I’ve used the standard Compressor/Limiter Dyn3. Dial in the settings you’d like. You can afford to set the compressor to work considerably harder than you normally would as this will be mixed in under the main drum mix. As you can see in the screenshot, I like to work it particularly hard, especially on rock tracks. This is largely because rock tracks use more drums and more ambience microphones in order to get a big stadium feel, and lose a lot of that crucial rock impact as a result.

Get the threshold down until the gain reduction meter is showing no less than 6dB of gain reduction and probably closer to 12dB for this purpose. You could even go as far as 12 to 18dB.

Often the attack and release are brought way, way down — even as low as the Compressor/Limiter Dyn3 can go. I didn’t want too much pumping to occur for this particular track and was happy with the impact of my drums, so I’ve actually used reasonably tame settings for a parallel compression bus.

It still retains the natural character of a rock drum kit but gives the kick, snare, hat and toms more power and also more presence in the mix. Despite the crazy compression settings we used, though, nothing sounds like it's pumping too much. This is the effect you're after when using parallel compression on a drum mix.