You’re in a darkened concert hall, your favorite band rocking out on stage. You get chills running down your spine as the singer hits that high note and the crowd begins to cheer. You are close enough to the stage to realize that the band-members are enjoying themselves immensely on stage, smiling to each other, locking into a groove that’s so tight it sounds like it could have been taken off their studio record.

In a live performance there are two different types of sound you have to take into account. The front of house (FOH) sound, and the monitor or stage sound. The monitor mixer is in charge of making the band hear themselves. A good monitor mix directly translates into how good a performance a band will give. It goes without saying, if you can’t hear what you are doing, you are prone to make more mistakes than if you have a perfectly balanced stage sound.

The Difference between FOH Mixing and Monitor Mixing

If you are mixing FOH you are in charge of mixing for the audience. What you hear is what the audience will hear. You are only making one mix, a stereo (or mono) mix of all the channels coming from the stage. But a monitor mixer makes independent mixes for all the band members, sending different levels to each and every person on stage, making sure they can hear themselves and the music around them as best as possible.

In a studio situation you send drums, bass and guitar to a singer when he’s laying down vocals. He needs to hear all the instruments clearly in order to sing correctly. Now imagine doing that to each and every band member, sending different mixes to every person at the same time. If you are lucky, you may only have a band with three to five members, but sometimes you have to be juggling ten different monitor mixes at the same time, mixes that might need changes from song to song as the band changes instruments or dynamics.

This becomes even harder in smaller venues when you sometimes have to deal with mixing the monitors from the FOH position, dealing with both the monitor and FOH sound. This can get pretty intense as you juggle mixing a great concert for the audience but still have to keep your eyes on the artists to see if they are in need of a change in their monitors.

Monitor mixing desks differ from regular studio or FOH mixing boards because you are only using the auxiliary pots to send different mixes to different speakers. There is no need for faders because you are not putting any signal out of the main bus.

This is the Allen and Heath WZ3 12M monitor mixing console. Notice that is doesn’t have any faders, just a lot of aux sends. In a big monitor mixing situation, you will be needing as many aux’s as you have monitors. When you are mixing the monitors from the FOH position, your desk will have to have as many aux’s as you plan on having monitors, in addition to the aux sends you intend on using as effects for the concert sound. 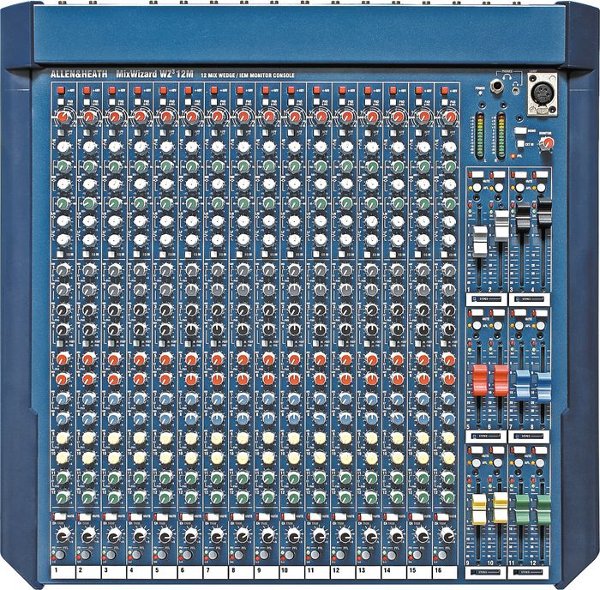 Connecting monitors is easy once you get the general idea of how the signal flows. Because every signal needs to go to two places; the monitor mixer and the FOH mixer, a stage box is needed. A stage box splits the signal that enters and sends it to two different outputs, which in this case is used for splitting the live sound from the stage sound.

As you can see in the diagram, the vocal mic is sent to the stage box, a copy of it goes to the FOH and also to one of the inputs of the monitor mixer. Using the aux sends of the same channel, you can route the signal to the monitors easily. In this case I want to send a little bit of vocals to the drum monitor. The drum monitor is connected to aux output 4 so by turning up the aux 4 pot of the vocal channel, I send the signal to that monitor.

Here is another diagram to explain the signal flow of the monitor mixer.

I add this later on because sometimes concert venues don’t have graphic EQ’s for every monitor, or the budget doesn’t allow it. But if you are lucky enough to get them included, be sure to use them, because the added volume available by EQ’ing out problem frequencies is key to transform an ok stage sound to a great one.

Here’s another diagram explaining where to put the graphic equalizer in the signal path. 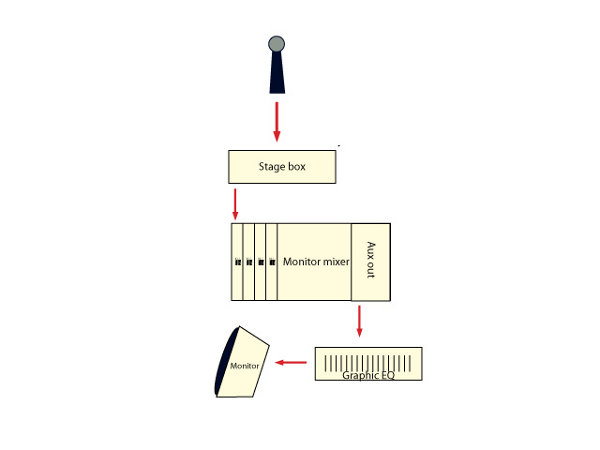 Also when you are sound checking the stage sound, a good technique is to have someone point a microphone at the monitor speakers close enough to feedback while you hunt for the problematic frequencies on the graphic equalizer. This is how you get the best signal to feedback ratio.

You should be wary of where you place and point the monitors. Always try to minimize the sound on stage so the audience near the stage aren’t hearing a different mix because the monitors are too loud or pointing towards them. Also keep in mind that an artist only hears the monitor if his ears are picking up the sound waves from the speakers. 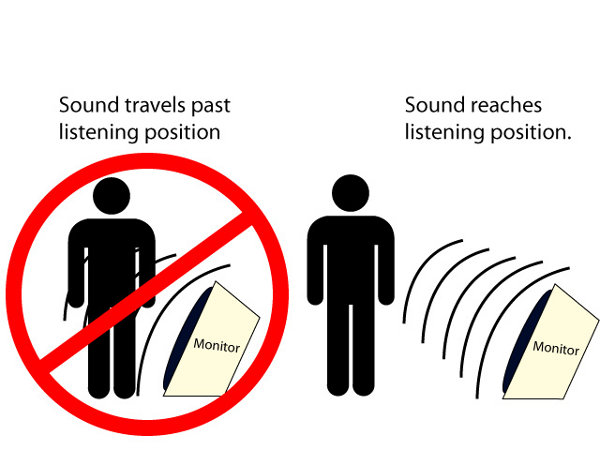 Sometimes the problem might not be the amount of volume you’re putting into the monitors. If a band member can’t hear himself properly, first check the placement of the monitor. If it’s pointing in the wrong direction, or the player is too close or off axis, then all you need to do is re-position the monitor.

This is similar to a familiar problem at rehearsals: If you put your guitar amplifier on the floor, then you are going to have a hard time hearing it since all you will be hearing is indirect sound from the amp reflecting around the room.

Don’t waste stage volume if you don’t need it. A short chat with the artist of where he should be to properly hear himself, a quick turn of the monitors and you’re all set.

These terms refer to extra equipment or monitor types often needed in a big live production. Drummers usually need to hear their kick drum properly, and normal 15” monitors sometimes don’t give them the low end needed for them to play confidently. That’s why sometimes you see drummers with and extra 18” woofer connected to their own monitor, giving them the extra power that they need. And since drums are incredibly loud, one shouldn’t really be surprised that they need an extra monitor. The same goes for keyboard or piano players. They play notes that can go down to 82 Hz (first E), so in some cases they will need an extra oomph for their monitor sound.

When monitor mixing, don’t try to put each and every instrument in each and every monitor. Instead, try to add only the elements that are needed after hearing how loud the amplifiers, drum sets and other instruments are. Obviously the singers will be in need of a hearty dose of their own voices, but sometimes a guitarist might not need that much of his guitar if he’s standing by his guitar amplifier.

Finally, sidefills are used to send a general mix of the whole band to fill the stage. Like I said before, if you stand off axis, too close or too far away from a monitor you lose perception in hearing what you are doing. And since artists tend to move around a lot it’s crucial for a great stage sound to have sidefills to fill the stage. That way, every band member can rock out wherever he wants, and returns to his own monitor only when he needs to, like for solos.

Rather than sending a full mix to every monitor, only send the instruments each player needs to hear. Then later you can make a general mix of every element to send to the sidefills.

For me, monitor mixing is a lot of fun, as I like being in contact with the band and helping them out on stage. You feel like a valuable part of the performance when you’re making sure everybody can hear themselves, and it’s that satisfaction that makes monitor mixing so much fun for me.

This tutorial should give you a general idea of monitor mixing: the different types of monitor mixes, mixing from the stage or FOH, connecting, positioning and dealing with feedback. But it doesn't cover everything. If you have any suggestions or experiences you would like add, it would be great to hear about them in the comments.