How to Automate Audio Tracks in Logic Pro 8

Automation is a very convenient feature of most modern digital audio workstations. When the record industry ran on miles of tape, there was no such thing as automation; it was all about manual knob-turning. We have it pretty easy in contrast.

Automation allows you to draw in a set of events that will automatically occur when you play back the track. For instance, you can draw a set of volume changes along your guitar track to hear it creep in and out of the mix. You can also achieve that dynamic stereo panning effect, causing instruments to swoosh from speaker to speaker.

You’ll notice the track size gets bigger and there’s now a straight line running through the middle of your track. This is the line that you adjust to make automation modifications.

By default, when you turn track automation on, you’re presented with the volume automation controls. Start by clicking on the line in the center of the track in a few places. This will create handles, which allow you to manipulate the direction of the line.

Now, click and drag on the handles and move them up to increase volume or down to decrease it. Shake it up a bit for the purpose of learning and move one down, the next up, and so on. Then play it back and hear the volume rising and falling. Your track should look something like this:

Using automation, we can fade a whole song out (or fade it in) on the master track. It isn’t visible in arrange mode by default. Go to the Mixer tab and right click on the channel that is labelled Out 1-2. Click “Create/Select Arrange Track”. You will now see it in the Arrange window. 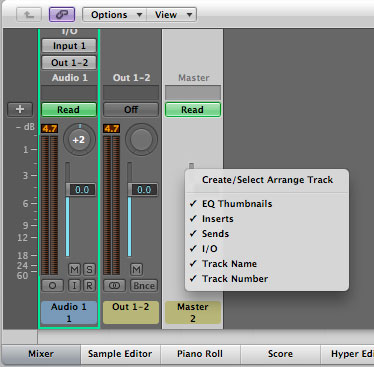 5. Create Two Handles and Fade Out

The first handle is there to make sure you don’t fade the entire song from start to finish, but rather just that last bar or two.

You can add stereo panning to your track with automation too. To the left of the track audio you should see the track’s label. Right underneath that label you’ll see a button marked Volume – that determines which parameter you’re automating. Click and hold until you see a menu pop up, and select pan.

Now you can pan from left to right the same way we automated the volume. Dragging upwards pans to the left, while dragging downwards is a pan to the right.

One cool use of stereo panning automation is creating a traveling fade. This makes your volume fade sound a little more realistic; rather than just magically disappearing, the sound is traveling in another direction until it can’t be heard.

Go back to your master output track and switch from Volume to Pan. You can create a pan that emulates the pattern of your volume automation, but I prefer to create three handles and draw a pattern that looks more like this:

This sounds more realistic to me. Listen to the traveling fade automation effect:

You can also automate effects you’ve added to the track as inserts. Hold down on the automation selector to pop up the menu. In this case I went to 3 Chan EQ since that’s one of the effects I had inserted on the bass. Under the effect submenu you’ll be presented with all the automatable options for that insert. You’ll find EQ has quite a few.

I selected the low cut slope to vary how much low end was reduced at any given time. Here’s what it looked like and how it sounded:

In step 7 I used three handles to automate the pan, but some people prefer to curve a single line rather than create two lines. You can achieve this using the Automation Curve Tool.

In the Arrange window there’s a cursor dropdown menu next to the Snap: and Drag: menus at the top of the window. Select Automation Curve Tool.

Now, click on any of the lines between two handles and drag it until it curves in the direction you want.