How to Build a Stereo, Filtered Delay Combinator in Propellerhead Reason

Recently I have been using Record and Reason (combined) as my main production platform. I'm finding it to be a great environment to work in. Obviously I have a few gripes, but Record is still in its very early stages.

One thing that always struck me about the application was its lack of a serious stereo delay unit. Although the advanced reverb and standalone delays are great, I felt I needed something with a little more firepower to use in my projects. Of course delay units are supplied in the factory section of the Reason library but creating a custom device is so much more rewarding.

So ... this tutorial guides you through the process I used to build a custom delay Combinator. Of course the modular nature of Reason will mean there are countless ways to do this, if you have created a different version it would be great to hear from you and if this is helpful to you I'll share my future creations.

So to get this monster delay started I created an empty Combinator and inserted two basic delay units. These delay lines do feature stereo in and out but they only really preserve the stereo content thats fed to them. Apart from a global pan control, there really is no control over the stereo sound stage. So I'll be using a delay line for both the left and right side.

With these two units created I had to decide how to route them to get a true stereo delay working. At first I tried to feed one side of the Combinator's output to the appropriate side of each delay unit but this just didn't work, so it was time to bring out the Spider.

Routing the delay lines to the Spider splitter.

In routing situations like this the Spider devices can be extremely useful and can allow much more complex routings to take place without really effecting your signal flow. In this case I used a spider 'Merger and Splitter' to duplicate the device output of the Combinator.

This simple split allowed me to take a true stereo signal into each delay unit, the output of these delay lines could then be panned at a later stage in the signal flow to ensure we are hearing a true stereo effect. With this section hooked up we're ready to move onto the next few devices in our chain.

We now need to route our delay units so that they are panned hard left and right and can be easily fed to the master outputs or any other devices we plan to use. I used a line mixer for this as I only really needed the pan controls and the ability to merge the outputs of the delay lines.

When I created this mixer it was automatically routed to the Combinators, this is fine for now as we can audition the effect in its current state but we'll need to change this later, to accommodate more devices. 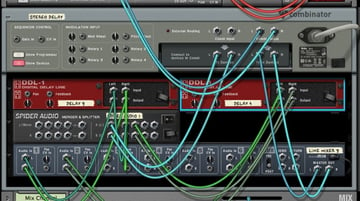 The Spiders outputs routed to their own channels on the mixer.

The delay units settings and everything panned hard left and right.

The same loop with the basic stereo delay applied.

One essential part of a great stereo delay line for me is the inclusion of a resonant filter. Now here I could of kept things simple and just used the Prop's envelope controlled filter but I think Thor's filters sound so much better, so I took the more complex route - literally.

I unhooked the routing to the Combinators insert inputs and routed them to 'Audio inputs' 1 + 2 on the Thor rear panel. I then flipped the synth and created a very stripped down patch that contains no oscillators, main filters or effects. The only module thats really active is filter number three.

The routing to the Thor's audio inputs.

I used filter three due to the fact it accepts left and right signals from the audio inputs. This means that it can be used as a true stereo filter and is perfect for treating external audio. The routing of the audio to the filter is achieved by using the mod matrix in the loser section of the synth. It's simply a case of assigning inputs 1 and 2 to the corresponding inputs on filter number 3. if your routing is correct you should hear audio passing through the device.

Setting up the audio inputs for filter 3.

I have used a resonant low pass filter here but you can really use any flavour you like. The comb and format filters are especially interesting if you want to create something a little leftfield.

The loop with a swept filter delay.

Another important part of a full on delay effect is the ability to add some controlled saturation to the signal path. Although I love this as an integral part of the effect, things can get a bit dulled by any sort of distortion. So... in an ideal world we would have a saturation effect coupled with an EQ and thats exactly what I've done here.

First up I've inserted a Scream 4 and used the tape saturation program (a personal favourite of mine) and then immediately after this there is an MClass equaliser with a healthy dose of high end added. As you will see in a later stage this is variable and not constantly on. These devices have been routed so that the signal flow remains constant and is ultimately fed back to the insert area of the Combinator.

The Scream 4 saturation effect, followed by the MClass equaliser

The saturation and EQ applied to the filtered delay.

At this point I realised the only way to control the amount of delay in the mix was to use the wet / dry controls on each delay unit. Although there is an easy way of controlling multiple parameters with one control (as you'll see in the next step), even dropping the level of both delay lines effects mix still left the filter, saturation and EQ present.

It became clear that another device was needed to achieve the result I was after. I used another line mixer and fed it with another line out from the original spider splitter and the last device in the effects chain. This effectively gave me a wet and dry channel which could be mixed to taste.

With the wet channel turned right down all we hear is the sound that the Combinator is receiving and absolutely no delay effect. This is perfect for introducing anything from small to extreme delay settings with exact control.

The new Wet and Dry controls.

The final step here was to create some custom controls for the Combinator. Thanks to the excellent programming system the Props have put together for us, this process is pretty straight forward.

I started by adding controls for the really key features of the effect such as cutoff and resonance for the filter. I then moved onto tape drive and delay level. Some of these custom controls actually effect a number of parameters. For instance the tape drive knob controls both the 'damage amount' and the tape compression level on the Scream 4 unit.

As a final touch I programmed a few of the buttons to turn on the chorus unit in the Thor and lastly one to activate the very high band in the MClass equaliser, giving a high boost effect across the whole device.

The patch with some added chorus and high boost from the custom panel.

Once the patch was finished I saved it for later use. Its probably a pretty good idea to save the settings of any key devices within complete patches like this, for instance saving the Thor's filter settings may save you time when constructing other effects patches. 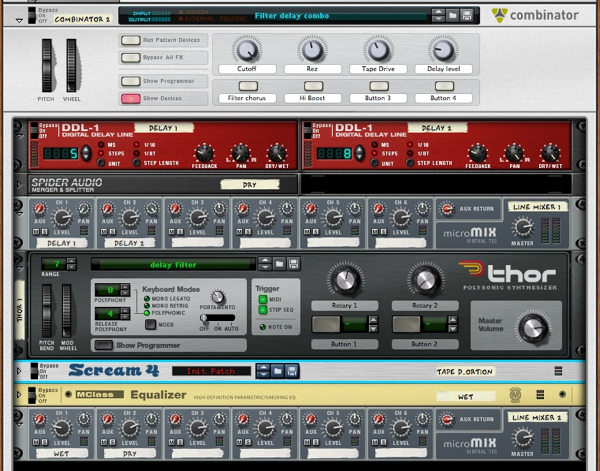 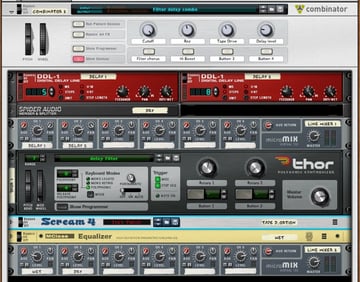 The final delay combinator in all its glory.