How to Choose the Right Distortion for Your Song

With so many ways of creating distortion effects at our disposal, it's useful to know the jargon and keep up to date with the plug-ins that are available. Mo Volans helps you get your head round some of the various types of distortion and the best plug-ins for the job.

The most basic form of distortion and possibly most popular is overdrive. This effect is created when an amp or pre amp is driven with enough gain to cause clipping and overloads. When analogue audio is driven in this way a warm, rounded, fuzzy effect is produced. This is basically the peaks of any transients and dynamics being rounded and can be very pleasing to the ear.

Overdrive tends to add perceived volume and presence, resulting in your signal sounding more powerful and upfront. This effect is pretty easily achieved with any guitar amp or basic distortion plug-in. In this case I have treated a dry guitar sample using the distortion algorithm in Reason's superb Scream 4 distortion plug-in.

Stepping up to the next level: distortion. Although every technique here is technically a flavour of distortion, when you hear people talk about it as an effect it is likely they will be referring to a standard intensity of processing. Think of it as the ‘regular’ or ‘vanilla’ flavour in the world of distortion effects.

A basic distortion effect is created in a similar way to overdrive but using more gain and intensity. This can be achieved using an amp or a specifically designed distortion unit with algorithms or circuitry designed specifically for this purpose. The sound produced here is well beyond clipping and causes a squaring of the waveform and loudest transients, resulting in a harsher, more metallic sound overall, with an aggressive edge.

I’ve used the standard distortion unit within Native Instruments Guitar Rig 3. Again, I’ve used a clean guitar sound versus the processed version to demonstrate the effect, only because it's clearer. Remember you can process absolutely any sound using these effects. Notice how these sounds are peaking at the same level but the distortion effect adds a huge amount of loudness or perceived volume. 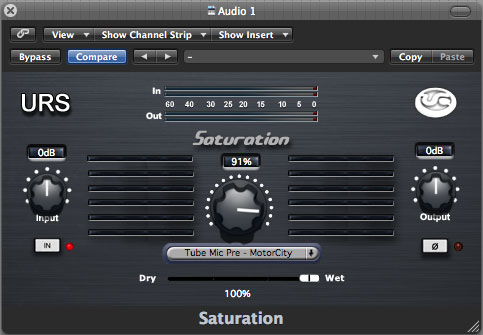 Saturation in any form is very similar to overdrive, in that it is really just the product of a certain component being loaded with a large amount of gain. These ‘hot’ signals produce a saturated, soft clipped effect. The main thing to remember is that the final sound can differ drastically depending on what component you feed it through. For example a solid state transistor amp will have a very different sound to that of an amp with vacuum tubes in its signal path.

Valves or tubes have long been revered as the most ‘warm’ and ‘fat’ sounding analog component there is, spawning many products including real valves in their construction. Valves driven at even low levels produce a pleasing saturated effect, introducing interesting harmonics and all important random irregularities into our signal.

Many software distortion units offer tube, saturation or ‘soft clip’ modes and there are also plug-ins dedicated to creating this sound. I have demonstrated the effect using the URS ‘saturation’ plug but with some exploration you’ll easily find an alternative, PSP’s Vintage Warmer 2 is well worth a look. Of course you can reach for an old tube pre amp for a 100% authentic sound! Remember these effects tend to be pretty subtle and aren’t going to make huge ‘in your face’ changes to a sound.

Another form of saturation is that created by the use of analog tape machines. When a tape is driven beyond the point of clipping on tape, although a form of soft clipping does occur, the main difference is some of the sound is folded back on itself, creating rich harmonics, random fluctuation and compression. These characteristics impart a highly desirable effect that is now faithfully recreated in expensive hardware units such as the Empirical labs FATSO (an emulation of which is forthcoming on the new Universal Audio UAD2 card) and more affordable software plug-ins.

Reason’s Scream processor is an excellent all rounder, capable of producing all sorts of effects but it really shines when it comes to its saturation models (both tape and tube). Listen to the drastic effect it has on this drum loop. 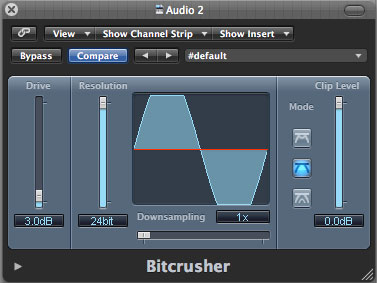 If you are after some real crunch and dirt you simply aren’t getting from the more traditional styles of distortion, you may want to try manipulating your sounds using techniques that lie in the digital domain.

Bitcrushing is now extremely popular in modern music and involves lowering the bit rate of digital audio in real time. These results in a dirty broken sound and sounds almost pixelated in character. For further manipulation some plug-ins offer the ability to downsample the signal, creating even more bizarre and twisted results.

In this example I have used Logic 8’s ‘Bitcrusher’ to alter a drum loop’s character in real time. You will hear the Bit depth swept first then the loop is downsampled. A lot of software packages include this sort of plug-in and often call it a ‘Lo-fi’ processor. 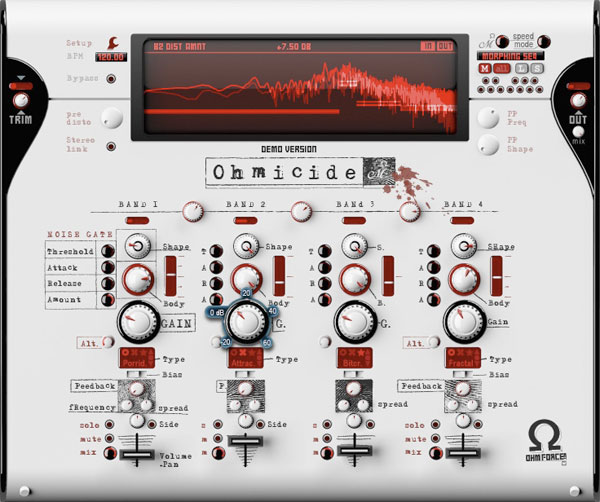 An effect that is perhaps less used is multi-band or multi-filter distortion. There are some great plug-ins out there utilising this effect such as the innovative Ohmforce ‘Ohmicide’ and D16 Group’s ‘Devastor’. Both these plug-ins use a series of filters and distortion units in different configurations to get a really fresh sound that is well worth checking out. The Devastor also has a really usable diode clipping feature for really intense digital distortion sounds.

Other distortion effects and plug-ins 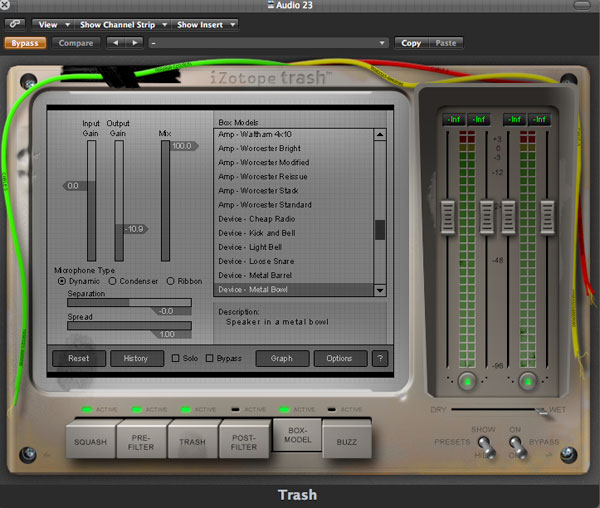 There are, of course, more ways of creating distorted sounds and this covers the most popular. Techniques such as foldback, phase and modulated distortions take the overloaded signal to a whole new dimension.

If you are interested in trying virtual devices that offer the ability to create some of these effects in a one stop solution try products such as iZotope’s Trash, Reason’s Scream, and Native Instruments Guitar Rig 3.