How to Combine Synths and Samples to Create Ambient Backdrops

Even if your tracks are mixed well and the arrangements are tight often they can feel a little 2D, almost as if something is missing. Adding an ambient, cinematic backdrop to the sparse sections of your project can really bring things to life.

In this tutorial we'll take a look at a step by step account of creating this sort of sound and the tools needed to get the job done. The techniques here are generic and you should be able to use any DAW to achieve similar results.

We are going to be creating our back drop or sound scape by combining a few synth patches and samples but a good place to start is a basic pad sound. This gives a canvas on which to work on and also point of reference for pitch and level.

To start with load up any basic pad sound, here I have used a patch from Logic's factory library loaded into the EXS24 sampler. You could use any virtual instrument or sampler for this task, so don't worry if your not using Logic. 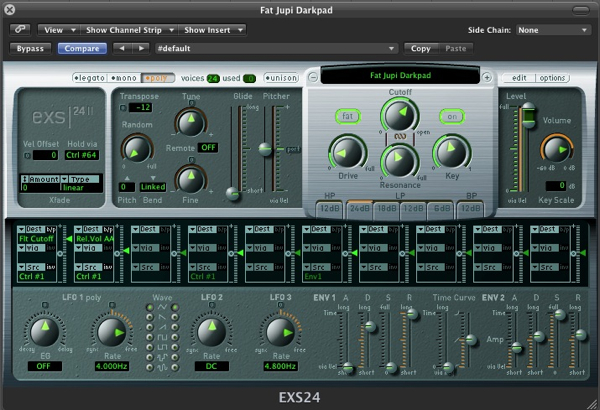 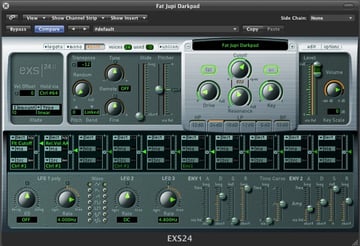 With your sound loaded its a good idea at this point to find the root note of any other parts that you may have in your project. Even through you maybe inserting this sound scape into a part of your track that contains no other instruments, its a good idea for it to be in tune as this will create a feeling of continuity. For example you may want to move from a drum intro (that contains your new sound) into a breakdown that introduces your main instruments, if everything is in tune things should flow nicely.

Now you have found the root note you can start to record some MIDI. We will be basing this sound on one continuous note, so this needs to be long. Its a good idea to make it the length of the entire section you want the sound to span. You should now have a continuous 'drone' that fills the space you want to work in. For the sake of argument I have used a period of eight bars here.

At this point you can fine tune the attack and release of your sound. This will make the sound fade in and out a little easier, making the sound less abrupt and giving you a little more room to work in.

You now have a basic foundation on which to build the rest of the sound. Let's move on and see how we can start to build new layers and add complexity and character to the patch.

As the first pad sound we picked was deliberately vanilla in flavour. Lets look at adding something that contains more dynamics and is perhaps a little more evolving in nature. I have opted for a patch from another EXS24 sampler but you could use any instrument that is a little left-field for this section. 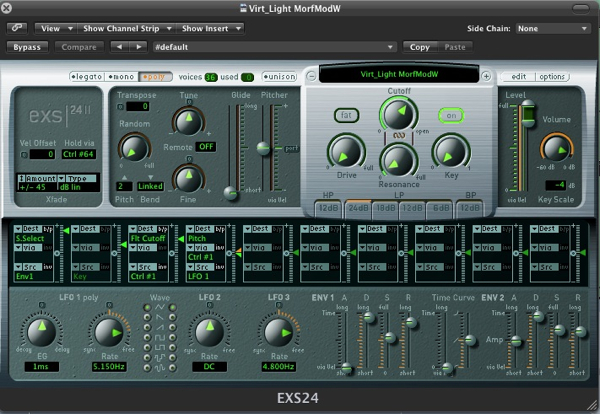 There are some excellent third party synths out there that supply evolving patches such as Spectrasonics Omnisphere and Native Instruments Absynth to name just a few. Of course patches from these instruments can simply act as a springboard allowing you to create your own complex, dynamic sounds. 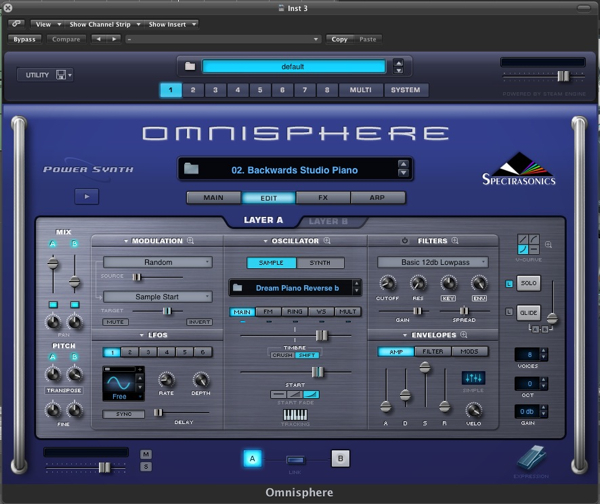 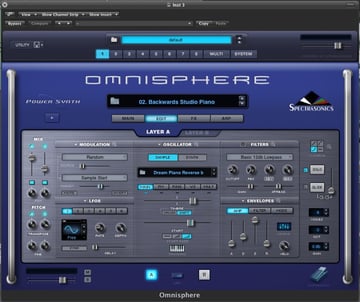 The key to making your new more complex patch marry with the original pad is a healthy dose of filtering. The first sound can be treated with a low pass filter, either using the samplers built in synth engine or an external plug-in. This will allow the high frequencies from the new sound to be heard more clearly. Some low end can then be removed from the second pad to complete the picture.

If you want to make the second pad a little more distant in contrast to the upfront nature of the first sound, try adding some reverb. I used Logic's space designer to give the feeling of a very large space here. 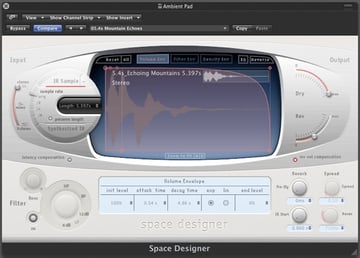 The second pad with processing:

Get a nice relative mix between these two sounds and if you want to eradicate the MIDI data you can export them to create two audio files. This saves you from having to start the new section from the very beginning every time you audition it.

With our first two sounds successfully layered the sound bed is starting to take shape. Now its time to decorate it a little and add some overall sparkle. I find that organic sound effects and recordings work very well here and offer a great contrast to the synthetic sounds that make up the core of the sound.

I'll be using library effects here to save time but ideally you would record these yourself for a truly bespoke end result. It's good fun doing this and you only really need a basic digital recorder and a decent microphone. Obvious choices here are traffic, crowds and water based recordings but at the end of the day anything goes. 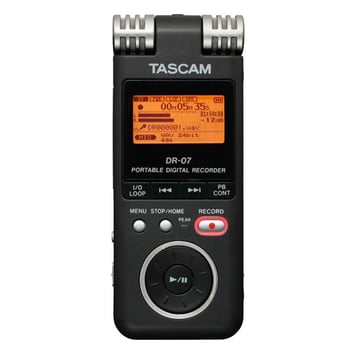 A portable recorder can be the ideal tool for creating ambient back drops.

With this new sound in place you should really start to get an idea of whats possible when layering these sorts of sounds. Although things should be pretty dynamic now we'll add some extra touches to create some separation between the pad sounds and our organic effects.

The final sound effect I chose.

To add some separation to proceedings and impart and 'otherworldly' feel to our sound bed lets use some automation and effects processing. First of all experiment with modulation based effects, adding chorus, flangers or phasers to our organic sound effect can really give it a sci fi twist and add some depth. 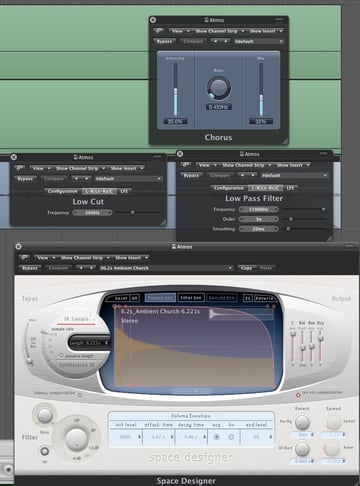 Now start to modulate the sound further by adding some pan and volume automation. This emulates mod mapping in a synth and can create real interest by widening the stereo field. Simple touches like this can make a repetitive section of a track interesting to listen to and even if these are effects are subliminal the listener will certainly pick up on them.

The treated sound effect with automation:

Finally an automated low pass filters and a large indoor reverb were used to make the sound even more unusual.

Finally we need to think about how these new sounds are mixed so that they sit with the rest of our track. Your sound maybe great in isolation but obviously it also needs to work with your other mix elements.

Try exporting each section of the sound bed and feeding all the resulting stems into a group channel, this will make them easier to treat and any instruments and effects used in the process can be deactivated to save CPU. You are then ready to add any extra processing the sounds may need.

Treatments that you may find useful here include, buss compression, high pass filtering, limiting and parallel compression. Any of these should tame any unwanted low frequencies or wayward transients that tend to leap out of the the mix. A simple dose of parallel compression can do wonders here, allowing your drum track to be heard above the new effects.

All the layers mixed and compressed.

If you aren't familiar with the processes mentioned above try running a search as I have written tutorials on just about all of these at some point.