How to Configure Your Axiom Control Surface with Logic Pro 9

MIDI controllers with control surfaces are quite common and affordable these days. They can control just about any aspect of your DAW, but their strength is in allowing you to control the DAW while at the keyboard as opposed to being used for a mixing session after tracking is finished. Since the Axiom doesn’t come with any Logic presets, let’s take a look at how to configure all those buttons, faders and knobs from withing Logic.

Every few weeks, we revisit some of our reader's favorite posts from throughout the history of the site. This tutorial was first published in August of 2009.

The first step, and the easiest, is to get Logic to recognize the Axiom’s transport controls, and then we can add functionality to a few more buttons. Go to the Logic Pro menu to the right of the Apple menu, and navigate to Preferences > Key Commands. 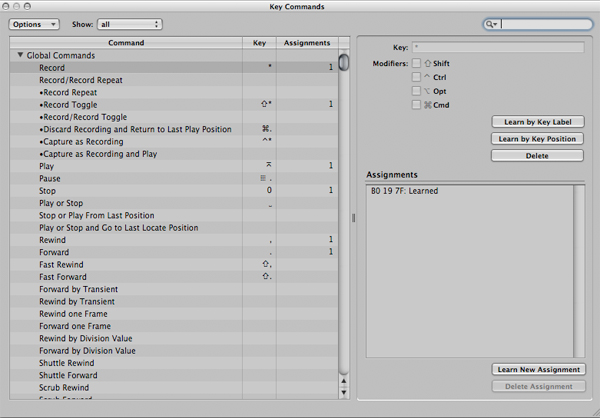 Key Commands allows you to configure a keyboard shortcut or control surface command for a massive range of Logic’s features. Open the Global Commands section by clicking on the small arrow next to it.

The Record button on your Axiom is now ready to go — give it a shot to make sure! Time to deal with the rest.

That was a little repetitive, but your transport controls should be fully configured by now. Take a break from the tutorial now to make sure they’re all functioning the way they should.

If you’re planning to get a whole bunch of Software Instrument track recording out of the way in one session, we need to add a couple more functions to the Axiom’s buttons so that we don’t need to go back and forth between the computer and the keyboard.

Use the search box to find “Select Next Track” and once it is selected, click on Learn New Assignment. Hit a button that suits you — I used the Zone 1 button — to assign it.

Now find “Select Previous Track” and follow the same procedure with an adjacent button. In this case I used Zone 2. With the Zone 1 and 2 buttons I can now navigate between tracks whether I’m in the Arrange window or the Mixer, use the Rewind and Forward buttons to find the spot I want to start recording at and then hit the Record button to start a take. You may want to find the Undo key command and assign a button for that so that you can quickly get rid of a bad take.

This means I can record takes on a whole bunch of instruments without touching the computer. If you’re recording through a microphone in your control room, it may prove convenient to have these controls set up if your microphone is closer to the Axiom than the computer.

A quick note: if you’re planning to use zones to split your keyboard up in order to control different MIDI instruments, it’d be wise not to assign Logic controls to the zone buttons like I have.

Having those buttons configured is really useful, but sliding faders and turning knobs is far more fun! Logic makes the process for assigning these pretty easy, although if you’re not attentive it’s much easier to mess your configurations up.

Let’s start with the faders. Some people will configure things so that the eight faders correspond to the first eight tracks in the Mixer, but I find my projects always have far too many tracks for this to be a useful way of working. Instead I like to assign the faders to modify a value on the currently selected track (which can now be easily changed using the Zone buttons).

Click on the selected track’s volume fader on the screen and then hit Command-L. Alternatively you can go to the Logic Pro > Preferences > Control Surfaces > Learn Assignment for … menu item. Either way, ensure that you click on the variable you want to assign a control to and then enter Learn Mode using the shortcut or the menu item. 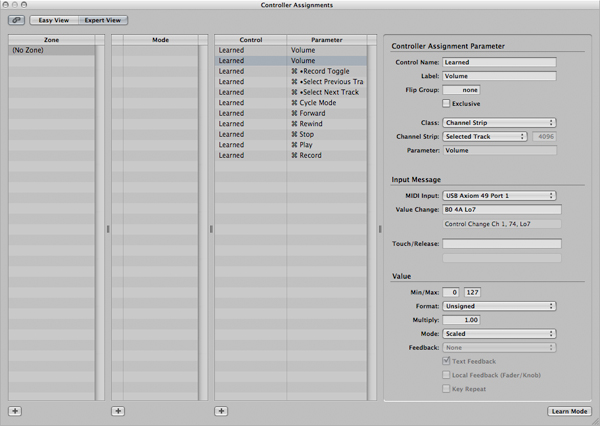 At this point it’s as simple as moving the corresponding control on the Axiom, so move the first fader in the set and then click “Learn Mode” on the window that has popped up when you’re done. This will disable Learn Mode — you must do this whenever you’re finished assigning controls before touching anything else either on the keyboard or in the software. If you do, your configuration will be ruined by the new input you’re sending Logic. I always forget to do this and wind up having to configure the control again!

If you’re going to do a whole batch of assignments in a row you can actually leave Learn Mode on to speed up the process, but it’s good to get in the habit of turning it off when you’re done to save yourself a headache.

Assign four sends on your selected track to some busses. It doesn’t matter where the sends go at this stage, we just want to be able to change our send amounts from the keyboard. Now, click on the first send’s volume circle and hit Command-L. Move the first knob of the first row on your control surface.

This time, don’t hit the Learn Mode button. Instead, click on the next send volume circle and move the second knob, and repeat this until all four have been configured. If you think you’ll be needing eight knobs for sends, you could even do more, but four is enough for me. Click on the Learn Mode button and test your knobs to ensure they change the values you want them to change.

Finally, I like to set the ninth fader up to control the Master Fader — after all, that’s what M-Audio intended it to be used for. Again, click on or move the master fader’s volume, hit Command-L and simply adjust the fader on the Axiom.

The knobs and faders can be set to modify just about any variable in Logic, whether it’s in the main Arrange or Mix windows, or part of a plug-in. Click on that variable’s software control, hit Command-L, and make the adjustment. For experimentation’s sake I set two faders to control the Logic Compressor’s threshold and ratio and it worked fine (though I have since removed those controls). Anything you think you’ll use on a regular basis, you should create a controller assignment for.

Since we haven’t used M-Audio’s Enigma software to configure controller assignments, this tutorial really applies to any device you have that can act as a control surface. The method is the same. The only downside to using Logic for these configurations is that you can’t switch to another set of controls using the Axiom’s (or any other device’s) Preset bank. That said, try out any device you can plug in and see what you can come up with using the key command and controller assignment windows!