How to Create a Finished CD with Apple's Waveburner

Although there isn't as much use for CD's in the production process as there used to be, many of us still like to have our finished album or mix on a professionally presented disc.

For all you Mac users, this tutorial will show you how to use Apple's Waveburner to get that finished project on to a CD with individual track markers and a professional polished sound. If you are a Windows user and would like to see the equivalent in an application like Wavelab please let me know in the comments section.

Whether you are creating an artist album, a DJ mix or compilation you can use Waveburner to consolidate the whole project. Obviously before we get into the basics of the application we have get the project out of the DAW it was mixed in.

Regardless of which DAW you are using there are few things to think about before you start exporting. Any sections of your project that are to be mixed seamlessly, or just played consecutively without gaps can be mixed in the DAW at this stage. These sections can then be exported and track markers can be inserted in Waveburner. If you are working on a DJ mix, or mixed compilation all your tracks will be exported as one large file.

With your consecutive sections and any single tracks mixed, you can start exporting. As we are technically mastering here you will want to export anything you intend to use at the highest resolution possible. 24 bit is preferable and everything can be converted to 16 bit at the end of the process.

Exporting the mix from Ableton

If this section still seems a little convoluted let me go through what I have done here... I have mixed a 'mini' DJ set in Ableton Live using three tracks, these tracks are obviously seamlessly mixed so they were then exported as one long file. 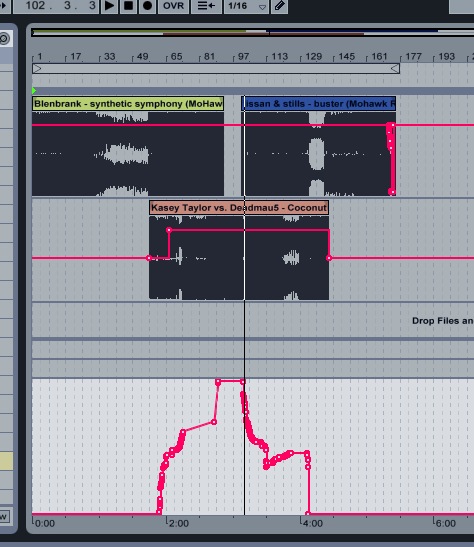 Our CD will contain three tracks and these will be made using only the single file produced in Ableton. If you wanted to use unmixed tracks you could add these at a later stage. If this is a little confusing I apologise, it should all become clear by the end of this tutorial!

Waveburner is bundled with Logic Pro and has been for the last few versions. At version 1.0 Waveburner was a little buggy to be honest, but it has really come of age recently, and after a few updates at version 1.6.0 it's now stable.

The application shares its look with Apple's new generation of professional tools such as Final Cut Pro and Soundtrack Pro. Everything is in a single window interface and its all pretty self-explanatory. The workflow is also pretty fluid and has some nice touches, such as the ability to resize the different work areas and full support for dragging and dropping files into projects.

When you open Waveburner it automatically presents you with a blank project. To add tracks to our new project we can use several different methods. The central window in the lower part of Waveburner's display is where our project media is displayed, files can be dragged and dropped into this window. Alternatively you can use the import function in the file menu or the shortcut in the upper toolbar.

The import option in the toolbar

Importing audio from the file menu

Once our file has been imported you will see it in the media list and when this is selected an overview of the file will appear in the display area at the top of the interface. With all the work areas expanded this can be a little fiddly but with the lower windows collapsed things get a little clearer.

Either way you get a good overview of your track and with the lower windows expanded you are presented with extra info on your file, such as resolution, loudest section and length. The lower windows on the right also display information on effects and processing, which we'll look at later.

Creating track markers is what Waveburner is good at and it executes this function with relative ease.

Simply find the point in your mix or album where you want the new CD track to appear and use the purple 'Add CD Track' tool. Once placed this new marker can be dragged about to any location you desire. It really helps to zoom in pretty heavily at this point as its nice to have the track change on the beat or at an equally appropriate moment.

Once placed you can name the separate tracks and move on to the next one. As this project only contained three tracks is was a pretty fast job! Use the next last buttons in the transport area to test your new track markers, as this is how they will sound on the CD.

The three markers in place

If you find that some areas of the project are significantly louder or quieter than others its possible to change this in Waveburner. The quickest way is to split the files with the dedicated tool in the toolbar. Once split the two new regions are re-located to their own lanes.

You'll notice that each region has its own level handle and the gain of each region can be easily adjusted. Don't worry about a small difference in level as a mastering compressor can always be employed to look after subtle changes like this.

You can also perform other tasks using these handles. If you overlap two regions on different lanes they will automatically cross fade, these cross fades can then be adjusted manually to get exactly the right blend between two files. Using a similar technique fades can be added the start and end of files, the curve for these fades can then be edited in the same way. I have added a fade out on the end of the project as the track hadn't finished.

Assuming the material that you have imported into Waveburner has not already been treated with mastering processors you can add some basic treatment using the applications included plug-ins.

The plug-ins that are available are exactly the same to those in Logic Pro 9. Waveburner is also audio units compatible so you can use your favourite third party mastering plugs if you like. 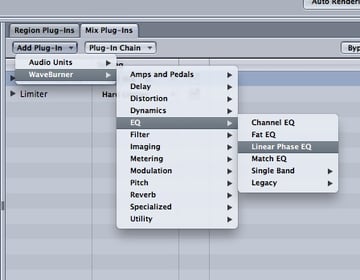 To add plug-ins go to the lower right hand window and use the add plug-in menu. You should be able to see all the Logic plug-ins in the list. I have used Apple-only effects here so that the project can be loaded on any system. I have used a linear phase EQ and a limiter, just to add a little high end and some volume. 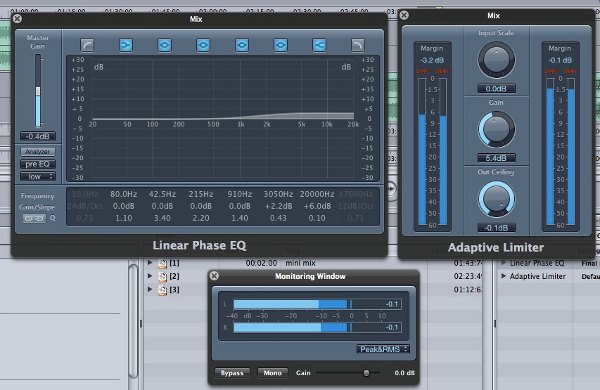 Plug-ins used on the project

When you're happy with the track markers and processing you can think about burning or saving your finished project. Before you do you have the option to 'bounce' the project. I like to do this as it cleans things up. By using the Bounce Project option in the file menu all the split regions and effects are 'imprinted' onto a single file. Your track markers however will stay intact and can edited further.

When bounced you can either burn directly to CD using the burn function or save the whole thing as a disc image. Saving as an image can be useful as you will have a 'master' copy on your hard drive and this can be used to burn multiple copies of your latest masterpiece! 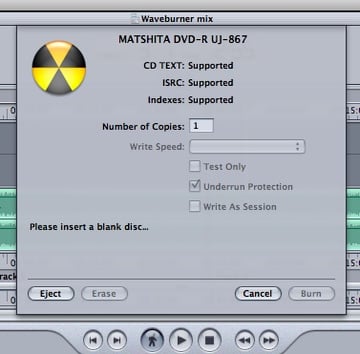 Burning the final project to CD