How to Create a Multi-Instrument in Logic's Environment

When producing, it is often desirable to stack different instruments to create more unique and textured sounds. The process of editing the MIDI data that controls those instruments can become tiresome and interrupt creative work flow as you are forced to update all corresponding MIDI regions before even the smallest of MIDI edits can be previewed. There are a few ways around this in Logic, one of which provides us with the opportunity to take a look into Logic's Environment.

Although Logic's Environment is reputed to be its 'dreaded' window, after some understanding and use it can quickly become an inseparable part of your productions. In this tutorial, we will take an introductory look into Logic's Environment to create a multi-instrument that will help streamline your productions as well as begin to dispel any myths about this extremely useful and often overlooked aspect of Logic.

Let's say you have found a combination of three bass sounds that you want to play in unison to form the main bass element of a current project. You have mapped out your MIDI pattern and decide to copy and paste the region into your remaining bass tracks to get everything playing together. Everything is fine, until you realize there are a few tweaks you want to make to the MIDI.

At this point, you have to derail your creative flow by making edits in one region, deleting all corresponding regions in the other tracks and then pasting the new region in the now empty tracks. All of this is necessary before you can hear an accurate update across all three sounds of even the smallest change. This process quickly becomes tiresome and monotonous at every stage of the creative process, from experimenting with ideas to finalizing the event data. To get around this, we need to employ the following trick.

To start, I have set up a layered bass sound consisting of three basic bass instruments responding to copies of the same MIDI region; all of which I pulled from Logic's library. 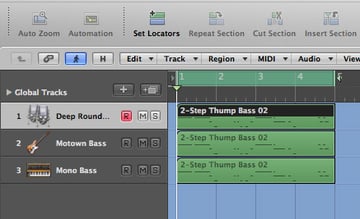 It is not very interesting, but more than suitable for this demonstration.

After listening a few times, I've decided that I want to change the pattern around by making some MIDI adjustments. I want to hear those adjustments as I make them and not have to go through the multiple steps necessary to update each individual region each time I change a note. To do this I need to create a fourth MIDI instrument/channel that I will use to control the existing bass instruments.

The beginning of this process requires me to open Logic's Environment (Window>Environment or ⌘8) where I will then go to the 'New' menu located at the top of the Environment window and select 'Instrument'.

As soon as I make the first connection, a pop-up dialogue will appear and I will have to choose 'Remove' from the dialogue box to remove the channel port that Logic assigns by default.

Now I will repeat the connection sequence by click dragging the new instrument patch nodes that appear on the instrument icon to whatever instrument channels I want to control (in this case the two other bass instruments).

Once these steps are done, your Environment should look something like this (I took the extra step of naming the new instrument 'Multi-Bass' which you can do by selecting the instrument object and then changing the name field in the inspector, located in the upper left). 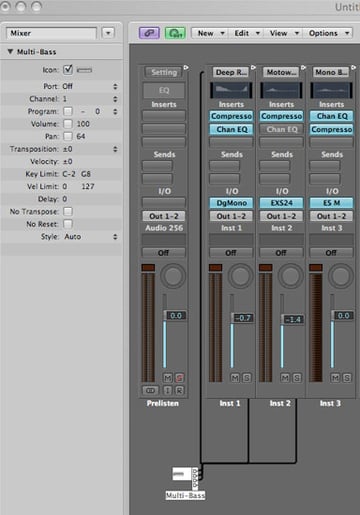 Now I have to go back to the Arrange page and create a new track. It does not matter what type of track it is as I will be converting it in the next step. The only important thing is that it is there. 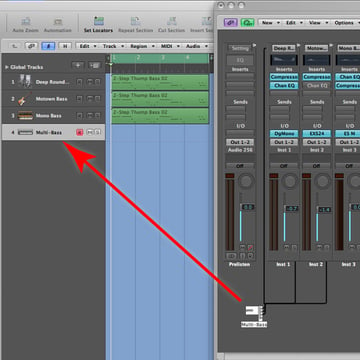 Now I can move one of the MIDI regions down to the new MIDI track and delete all the others and still have the same output as when I had three regions. Logic will now read the MIDI within the new multi-bass track and route that MIDI information according to the patch in the Environment.

Here is how it sounds with some slight MIDI editing within just the one region.

Although it sounds pretty much the same, the key here is that it only took editing a single region to change the pattern and subsequent output of all three instruments.

Now I can hide the instrument tracks and edit the MIDI within the single region and all of my bass tracks will correspond to those edits instantaneously without my having to update other tracks or regions. This greatly increases my productivity, and allows me to preview multiple creative ideas without having to change gears to constantly update MIDI in other tracks.

Of course you are not limited to just three instruments, but generally 3-4 is a good number for sake of clarity. Try experimenting around with different numbers and different types and see what happens.

In the next tutorial, we will take things a bit further in the Environment by looking at the transformer object and programming it to control various parameters (cutoff across all three instruments, etc.) of our multi-instrument by using just a single parameter.