How to Create a Retro Filtered Delay

There's no doubt that digital delay is one of the most usable effects in our plug-in collections. Most of us turn to it numerous times during the mixing process to add some space, sparkle and width to our sounds.

There is always a danger that with such a frequently used effect that you can get stuck in a rut, relying on presets and familiar settings. This can lead to similar sounds popping up in every project and things can get a little tired. The trick is to spice things up a bit and think creatively when setting up your delay lines. Using a few tricks and some extra processors, your delay effects can get a breathe of fresh air and really come to life. Here is one possible technique to get you started.

Step 1 - Choose the Sound You Want to Process

Delay of any kind can be used to effect pretty much any sound you can think of. I've opted for a synth sequence as the notes are short and defined and will demonstrate the delay effect clearly. I have completed this tutorial using the ES2 synth, in Logic Pro 8 but you will be able to recreate the set up in any DAW.

You can see that at this point the synth is playing back a very simple pattern with no effects at all, the only processing is a simple low cut filter applied as an insert. 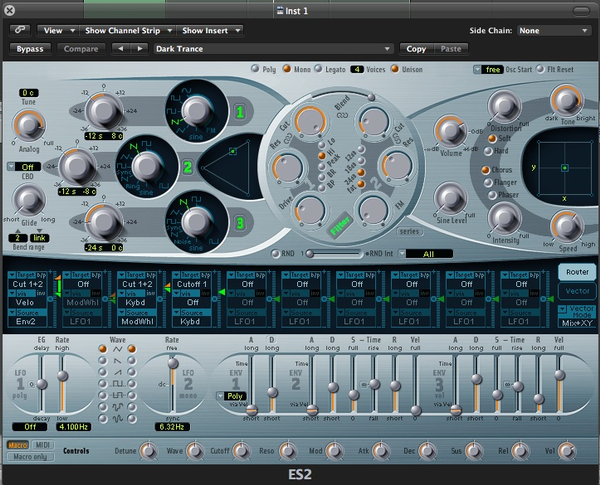 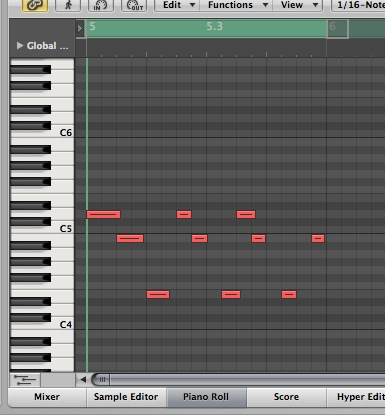 To achieve the best result when working with delay and reverb it is a good idea to use a send/return configuration, as opposed to a straight insert. This allows you more control over any effect that uses repetition or has a 'tail'. The original sound can be manipulated or altered in any way without effecting the sound of the returned effect. When using this set up you can also send several sounds in your mix to the effect.

Setting up a send and auxiliary return is a pretty straight forward process in most DAWs and Logic is no exception. Logic Pro 8 now features 'dynamic buss allocation,' which is a technical way of saying that new busses or aux channels are made automatically when you activate a send.

Once the buss is created some signal is sent to it and the new return channel is named. The routing is now complete and we are ready to start setting up the new delay effect.

You can use any delay plug-in you like to create interesting effects. The actual delayed signal is just the basis of the whole effect. So if your delay is a little mundane, don't worry because it's what you do after the delay plug-in that really counts here.

I have chosen to use a plug-in called Ohmboyz from French company Ohmforce. It's very likely that a lot of you will have already come across this plug-in, or even own it. But for those of you that don't, Ohmboyz is an extremely versatile plug-in that is actually capable of producing extremely interesting filtered and effected delays all by itself.

If you don't have Ohmboyz you can download a fully functioning demo here.

I will be using extra plug-ins here to create filter and modulation effects but there are plug-ins (such as Ohmboyz) that have some of these capabilities built in and it is well worth experimenting with them. You may often find that you gain more control over the sound if the separate processes are produced by individual plug-ins, try both methods and decide which is best for you.

On opening Ohmboyz you are presented with a default delay setting. For the purpose of this tutorial this delay setting is perfectly suitable, so i have not altered it much. It consists of one unfiltered delay line, with moderate feedback and a 3/4 timing. One thing I have done is turn down the 'pre-delay' control to zero. This ensures we don't hear any of the dry signal through the return channel. 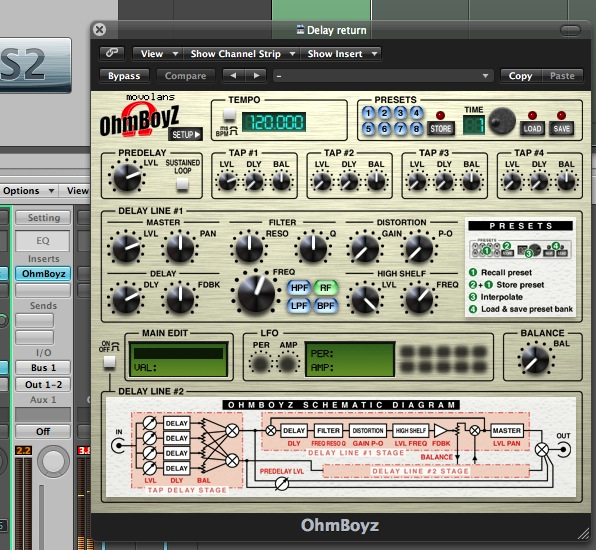 One way to inject some flavor into a simple delay effect is to use modulation based effects. Not only can these add a feeling of movement but some effects such as chorus, ensemble and unison will actually give a mono delay line a stereo image. This is very useful in applications such as Reason where mono delay lines are supplied as standard.

Here I have used Logic's phaser plug-in to add some extra interest to the sound. You can clearly hear the phaser on the delay but not on the original signal. This is where the send/return configuration really comes into its own, as the original sound is left intact and loses none of its impact.

Delay treated with a phaser

The final processor in our chain here is Logic's Autofilter plug-in. This is simply being used as a resonant low pass filter, with a touch of distortion. This not only adds further depth to our delay line but also some crunch.

Once the resonant filter is set up and you are happy with the sounds after some manual sweeps of the cut off frequency, you can try automating some movements. You can hear that I have used a very slow sweep to emulate a slow moving LFO and the variation added to delay line really works. 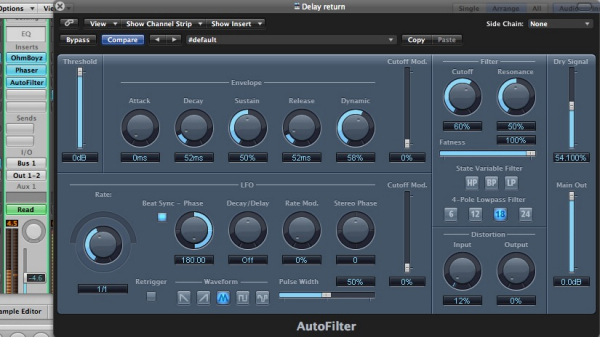 As a final touch let's adds some auto-pan to the delay return. As this is a mono delay line it should really help to open the image of the sound up and add some space.

You have a few choices of how to go about adding pan information to your track. You can automate the actual pan control of the channel or you can use a plug-in. In this case I have opted for Logic's 'Tremolo' plug-in, which produces excellent pan effects, but if you prefer to use the pan control on the return, the effect would be the same.

I have used a very slow pan effect here at about 70% depth, this compliments the filter automation well and remains pretty subtle. The whole effect is now very organic and moves around the stereo field nicely. 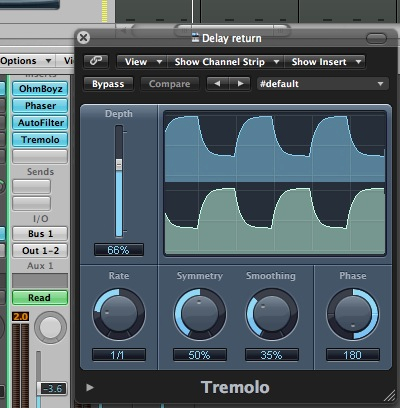