How to Create a Stutter Transition in Reason 4

In this tutorial, you’ll learn how to create a cool ’stutter’ transition effect inside Reason 4 using two combinators. The effect is relatively easy to pull off and makes for an interesting transition to work into your songs.

To begin, go ahead and create a new document inside Reason. Before we begin constructing our song, we want to make sure we have the rack setup correctly so we can utilize our effect patches later in order to achieve the stutter transition. What we want to do is create two mixers. One for drums, and one for instruments. The reason we want all the instruments routed to a separate mixer from the drums is because we want to create two combinators that are going to act as global effect patches for each mixer. In other words, we want one combinator affecting only the drums, and another affecting only the instruments.

Now, in your newly created empty document go ahead and hold down Shift and create a Mixer 14:2. We don’t want the Mixer to be routed automatically. Now create another, again while holding Shift. You should now have two mixers in your rack that are not routed. 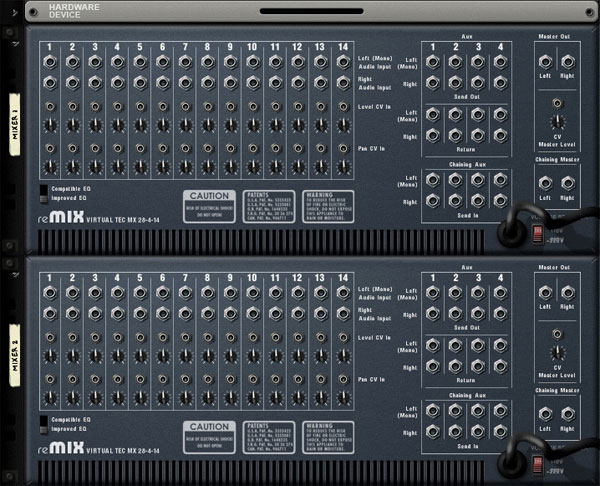 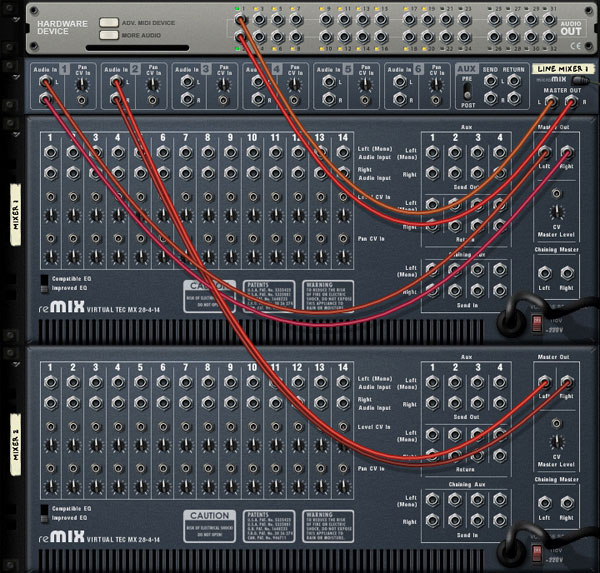 It’s time to turn on your creative juices. Start composing your track using the mixers you setup in steps 1 and 2, keeping all drums on Mixer 1 and all instruments on Mixer 2. Once you are done with your song and wish to add a stutter transition to your track you’ll need to create your global effect patches for each mixer and automate the enable/disable switch of the combinators. 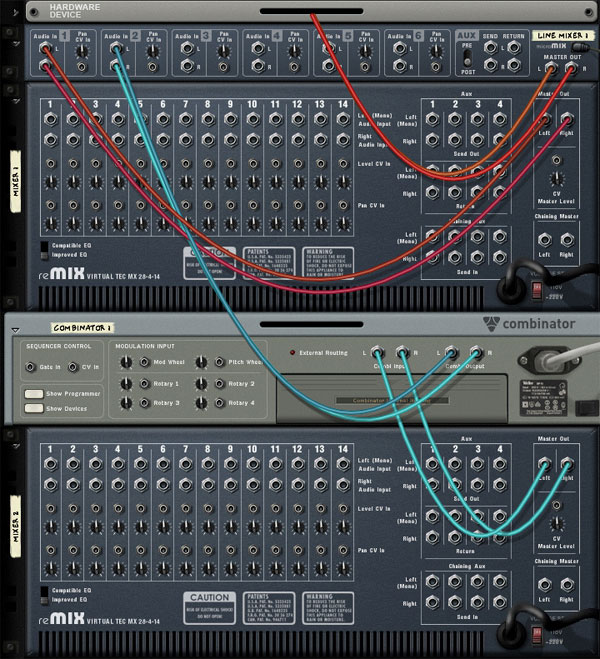 Let’s just assume I have all my instruments routed to that mixer and my song laid out, however for purposes of keeping the images clean, I’m going to continue to use my nearly empty reason document.

Now that we have our instrument’s mixer routed correctly into the combinator, we’re going to change a few settings on the combinator and make sure we switch the combinator from “On” to “Bypass” - we’ll set automation on the switch later in order to achieve the transition effect.

I got the best results from these settings, however, feel free to adjust them to your personal taste.

Now that we have the instrument effect combinator setup we’ll go ahead and automate the bypass/on switch and place it into our track. For my track, I’m going to focus on the area just before the drums kick in - this is after all an instruments only effect combinator. Here’s an excerpt of my track just before the drums kick in. You’ll notice the transition is a little bland and could use some work.

Right click on the Bypass/On/Off switch of the combinator and click “Edit Automation” - this will create a track in the sequencer for the Filter Sequence [Run] combinator. Next, create a clip in the sequencer. I used 1 bar as my length. 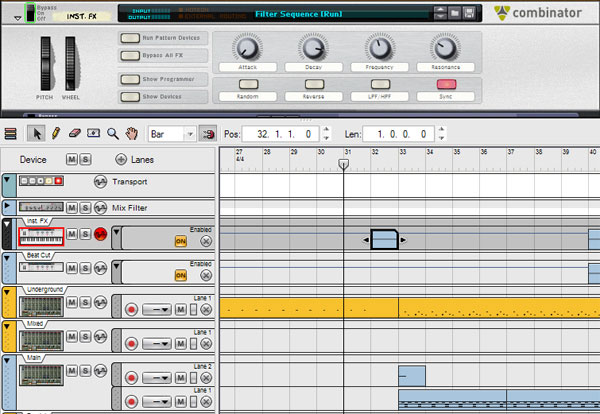 As you can see, I placed my clip just before the drums kicked in.

Double click on the clip you created and create a point set to 1. This will turn the combinator on at this part of the song.

From doing this, my track now contains a little more spice, however, there’s something missing. It needs something to fill the gaps a bit.

From the Reason Factory Sound Bank, create a subtractor with the Synth FX patch “Malfunction Lead” and make sure it is routed to the instruments mixer. 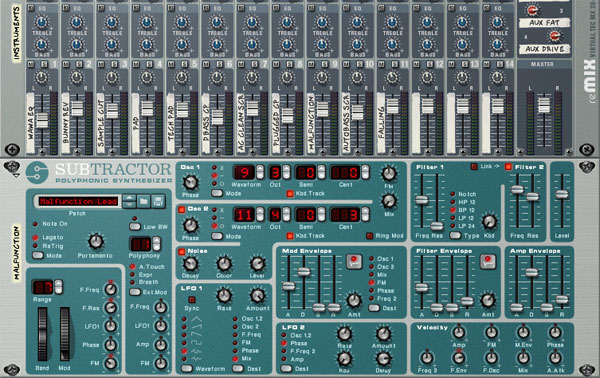 Now create a clip for the Malfunction Lead on the sequencer that begins 2 bars before the drums kick in and ends 4 bars after the drums kick in. You may need to adjust the length depending on the tempo of your track.

Create a single note to cover the duration of the clip, I chose F1. 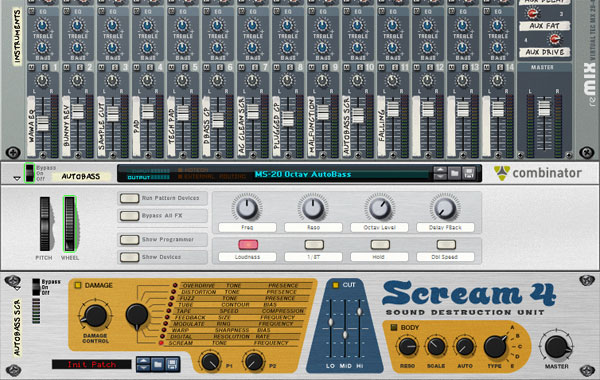 For the Scream 4, use the following settings or feel free to adjust:

Create a clip 1 bar in length just before the drums kick in. 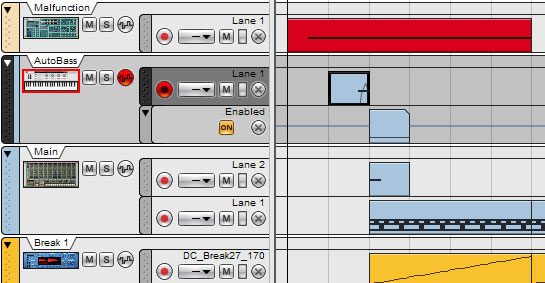 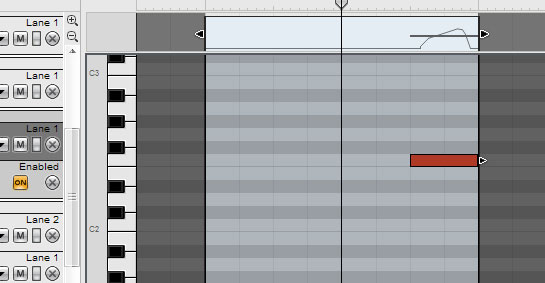 Note: This combinator may want to trail off after the transition so if you do not want that to happen, simply create an automation clip on the on/off switch of the combinator and place it just after the note.

Let’s see how this sounds in context with the rest of the mix.

Drum time! As we did with the instruments mixer before, we’re going to need to create a global effect combinator for the drums mixer. Hold Shift and create a combinator and place it above the drums mixer and load the patch called “Rhythm Cutter [Run]”. (Search for it, it’s a Pattern Based effect patch located in the Reason Factory Sound Bank). Make sure you switch the combinator to “Bypass” before adding your automation clip to the sequencer. 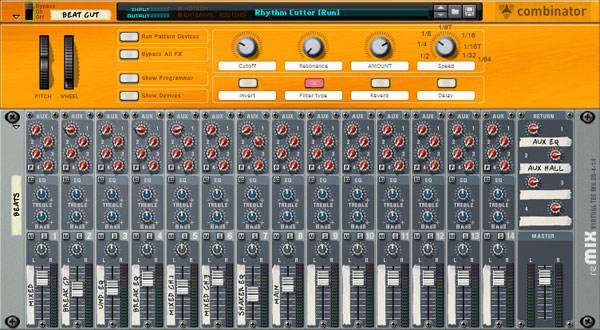 Now we need to change a few of the default settings. Here’s what I use: 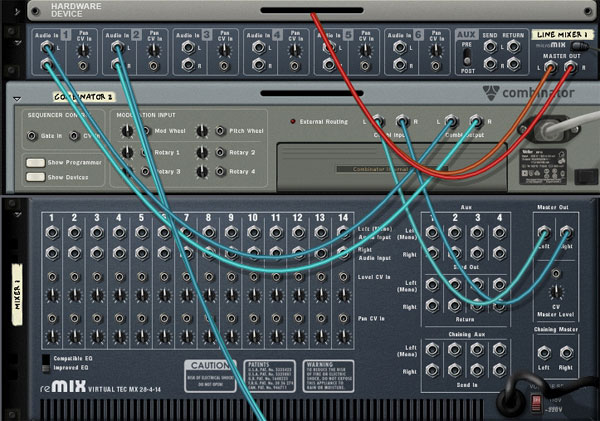 Now that everything is routed correctly for the drums mixer, the process of utilizing the effect is the same from what we did before. Simply add an automation clip on the combinator’s Bypass/On/Off switch and create a clip in the sequencer. I’ll go over it again in the next steps.

Drums and instruments without transition

Now if we use the two combinators and place our “enabled” automation clips on the same bars just before the vocals and drums kick in, as well as set the Malfunction Lead and MS-20 AutoBass combinator we’ll get something a little different. 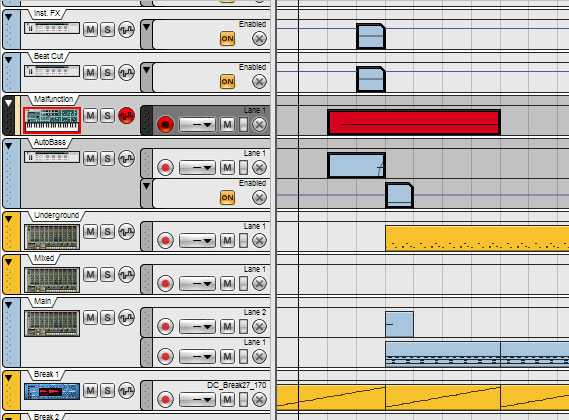 Beat Cut is our “Rhythm Cutter [Run]” combinator. Its enable automation clip is placed on the same bar as the instruments’ effect combinator automation clip, in turn creating a pretty cool transition. Check out the final result below.

Brian Hardisty
I'm a Reason junkie and have been since my sophomore year in high school. I'm highly interested in the technical side of Reason, the routing techniques, how to recreate a popular sound such as a synth from a classic hit with the use of subtractors, malstroms, and the effect devices Reason comes with. Using the limited tools Reason provides to create just about any sound you want is something I find to be very cool and interesting.
Weekly email summary