How to Create a Velocity Layered Instrument with Maize Sampler

Maize is a VST sampler that’s really easy to use. All you have to do is drag your samples to match the notes of a keyboard, and then you can play them back from your MIDI interface. Okay, that in itself may seem like no big deal, but what is really interesting about Maize is that you can export your finished patch as a VSTi synth which you can share with others.

You can download a free version, and if you chose to purchase the full version registered users can sell their VSTi creations and also customise the background and logo. In this tutorial I will show you how I made a very simple Djembe instrument from scratch using some samples of the African drum that I recorded.

I’m going to make a velocity layered instrument, which means that striking the keyboard at different velocity levels will trigger a different sample. You can download the Djembe VSTi I created in this tutorial’s Play Pack at the end, to use in your own music. I will be using Cubase 4 but the procedure would be very similar in any VST-compatible DAW.

I also wanted to record the sound of hitting the rim of the drum with my fingers, and again, a dampened version of this. With both of these sounds I wanted to capture three levels of dynamics; soft, medium, and loud. All three can be mapped to one key on the sampler, so that varying the pressure when striking the note on the MIDI keyboard will trigger a different sample for each sound.

This sounds more natural and avoids the “machine gun” effect that one can get with samples. I managed to record all the sounds in one take by playing through the types of sound and varying the force that I used to give me three versions of each:

Next, I zoomed in on the audio and carefully exported each sample. It is important to make sure that the start and end of each sample aren’t clipped off prematurely when doing this.

Everything between the locator flags will be exported, so you can either turn snap off and move the locators to the exact start and end of each sample, or drag the sample to the start of the locator range and adjust the right locator to the end of the sample.

You can just check the sound before exporting by hitting play in loop mode, it should loop seamlessly. When exporting, I named my samples numerically from 1 to 3 with 3 being the loudest. 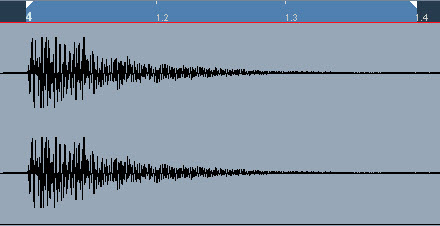 Here we have the Maize sampler interface. The sample pool on the right hand side is where we browse for samples and we can then just drag them to the keys in the centre. 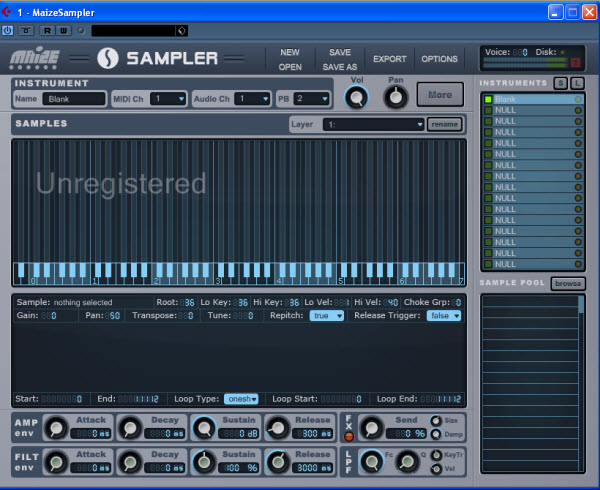 Here are the samples imported. I’m going to map these out over four keys. As it is not a tuned instrument it does not particularly matter which keys, but for convenience I prefer to just use white keys starting from C1. 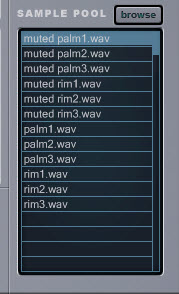 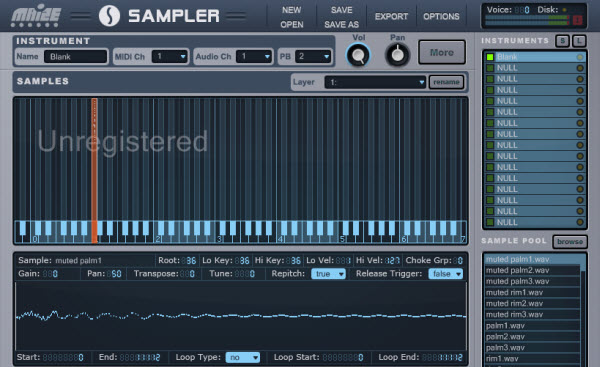 I’ve adjusted the high velocity of the first quietest sample to 40 by dragging the top of the orange column which represents the sample downwards. This means that this particular sample will only be triggered when the note velocity is between 1 and 40. You can also edit the velocity values by double clicking the numerical display and entering a value.

Now I’ve dragged the second loudest sample (“Muted Palm 2”) to the same key and adjusted the low velocity to 41 and the high velocity to 80. This means it will only be triggered when the note velocity is within this range.

Finally, I have added the loudest sample for this sound (“Muted Palm 3”) to the key and adjusted the low velocity to 81. The high velocity is left at the default value of 127, which is the maximum velocity using MIDI.

I have done exactly the same with the other three sets of sounds (Palm, Muted Rim, Rim) mapping them to the D, E, and F keys. 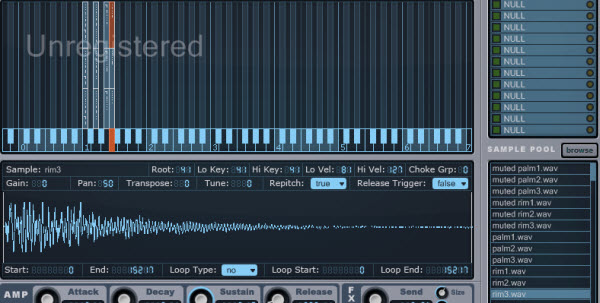 Another thing that I’ve done is to set each and every sample as a oneshot. This means that when the sample is triggered it will play from start to end rather than cutting off as I release the key. This will sound more natural for this type of sound. 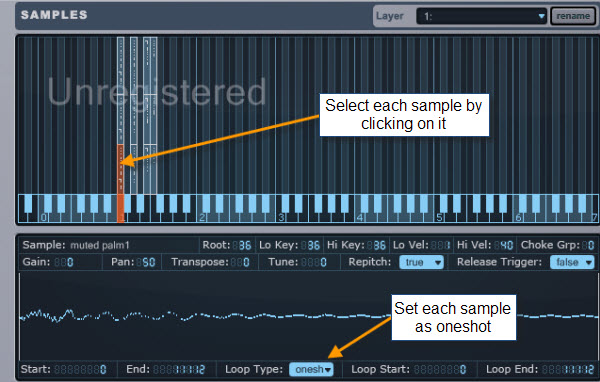 I want a bit of reverb in the sound. This is a global effect and is turned on by clicking the FX button. I’ve adjusted the send level to 19% and adjusted the size and damp settings as in the diagram for a balanced sound.

The instrument is now finished. Let’s have a listen to how it sounds. In the following example I’m just hitting each key at varying velocity levels and in turn to show how this triggers the different samples for each sound.

Let’s give the instrument a name by clicking on the left hand name panel and entering the text. I chose to call this “Andy’s Djembe.” 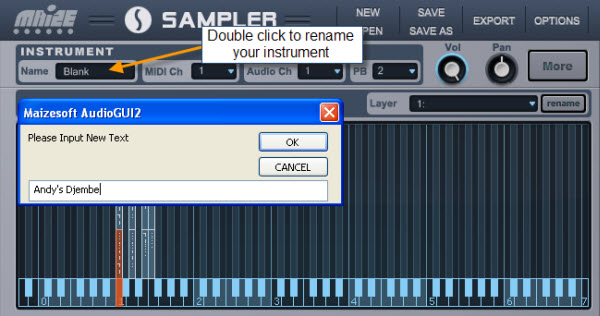 We can also name the layer. I’ve called it “Djembe.” It is in fact the only layer I’ve made in this instrument, but you can make up to 12. Each layer can have its own set of samples, so for example if you wanted to create a drum VSTi you could put a different kit on each layer and name each layer.

By clicking Options on the top right panel I’ve brought up the sound library options. The default name of any VSTi that you export would be “mySound”, I’ve renamed it “Andy’s Djembe” and altered the Vendor name to Andy Slatter. Using the registered version, you would also be able to chose your own background and logo for the VSTi interface. 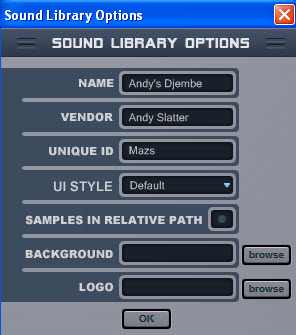 Clicking the Export tab finally creates the .dll and associated files for the VSTi. 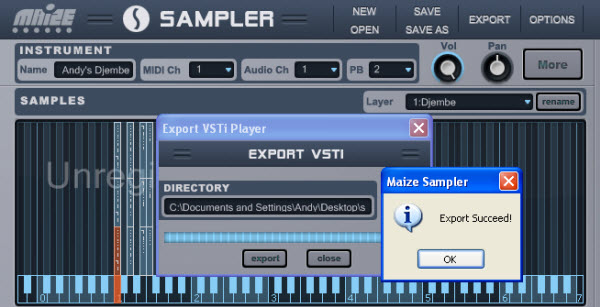 Choose a location to save the files.

Double-clicking on the folder shows the files that were created. These can be kept in this folder. To install the instrument, just drop it into your VST plug-ins folder. The VSTi also works standalone if you double click the Maize Sampler Shell icon.

Here is the finished instrument loaded up in Cubase.

I recorded a loop on the Djembe VSTi. As I recorded it I tried to vary the pressure on the keys to trigger different samples and get a feeling of varying dynamics. If you don’t have a velocity sensitive keyboard you could still vary the dynamics by editing the velocity of each note with the pencil tool.

I also recorded a drum loop in HALion One using the jazz drum kit. Let’s hear what this sounds like with the Djembe loop:

I have made a very simple instrument here. If you have the time and patience you could make some very sophisticated multi-velocity layered, and multi-instrument VST romplers and go on to sell them as many other users are doing.

Velocity layers can also be used in other creative ways. For instance, if you were creating a guitar patch, you could set a sample of a sustained note to be played between velocity values of 1 to 120 and a staccato note to be triggered between 120-127, or a string bend or slide to be triggered in the upper velocity values. This allows for expression and realism in the performance.

The sky is the limit, but the real beauty of Maize is the satisfaction in be able to create your own VSTi. 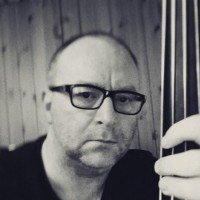