How to Create a Wall of Acoustic Guitars

This tutorial is going to teach you a nice technique on creating a thick wall of acoustic guitars in your mix. It's not only a mixing tutorial but it cover both the recording and production process. We'll be going over some music theory to create a layered guitar sound and then record it in such a way that we can create a shimmery wall of strummy acoustic guitars.

I'm using a selection from an EP I'm currently recording with my own band, The Long Wait, using our acoustic guitar tracks to demonstrate the following examples.

This is going to be a different take on overdubbing and doubling guitars. Normally, when you overdub you just record the exact same part over again, creating a slightly different part that thickens up your guitar part. On this occasion, since we're actually dealing with two different guitar players they are not actually playing the same part.

We are recording the same chords, theory-wise, but at different positions using a capo to make things easier. On the fret board you can play a D-chord a multitude of ways. A D shape is very familiar to any level of guitarist, but you can also play D power chords on the fifth fret as well as the 10th fret.

However, if you are using capos you can accomplish a much richer sound. We are going to be placing a capo on one guitar and play an open chord while the other guitar plays the same chord in a different at another place on the guitar.

In the following audio example we'll be using the chord progression from D to A. A simple enough chord progression but we'll make it sound much richer. If you put a capo on the 2nd fret of one guitar and play a C shape and a G shape you are essentially playing a D and A chord in a different shape. By recording both parts playing the same chords but with different shapes we get a much different sound than if we'd simply overdub the same part over.

Here is the first guitar playing the simple D and A open shapes with a capo on the first fret.

The other guitar is playing C and G shapes with a capo on the third fret.

I recorded both guitars using the X/Y technique. This is a stereo microphone technique that's simple and easy to use. Just place two condensers together at a 90° angle and find the sweet spot of the instrument. Since it's in stereo I now have two tracks of both guitars. Usually I would pan the two tracks hard left and right to create a nice stereo image but since I have four I'm doing something different.

I'll pan one microphone hard right and the other one a little bit to the left of the center. I'm doing the opposite to the other guitar track so now I end up with two guitar tracks that overlap.

Hear how nice and thick those four tracks sound together?

Since this is the same guitar recorded two times I want to EQ each part a little bit differently to make it stand out.

This is a quick and dirty EQ for the acoustic. Nothing final really but more as a way to show you an example. By accenting different frequency areas of each guitar part you make them sound a little different from each other. This makes you able to distinguish between the parts a little better.

A different way would be to bus all the guitars together and EQ them as one whole. Both methods are fine, especially since we're basically EQ'ing the same acoustic guitar.

As you see above I've bussed all four tracks to the same subgroup so that it's easy to manipulate the wall of guitar with only one fader.

I've slapped on a little compression to make the tracks sound thicker as well.

Now we've the guitars sounding pretty tight and big together. We're almost there.

Listen to the audio file below. Hear how the guitars sound spread out and big, with the different chords creating a nice harmonic texture.

Just to add a little bit more space to it we'll send our guitars to a reverb. Since I have all the guitars on one bus it's simple and easy to send the four tracks to the same reverb. Just insert a send on the guitar bus and insert a desired reverb on the aux track. 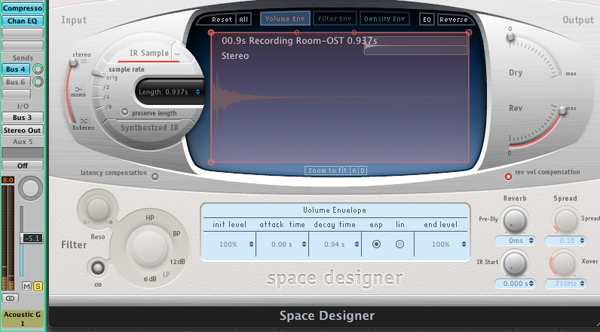 This gives our acoustic guitars just a little bit of space and makes this wall of guitar sound even better.

Step 5: Inserting It Into the Mix

Now we just treat like a normal rhythm track and insert it into the mix where it belongs. Just bring up the fader until you like the level of it in context with the drums and bass.

Listen to the final product below:

Using a little bit of music theory to create more interesting guitar parts can help build a more harmonically exciting mix. With two acoustic guitarists playing at the same time it is also nice to come up with interesting ideas such as this to make the production more aurally exciting. Next time you want to create a strummy guitar rhythm try using different chord shapes to enhance the harmonic foundation.