How to Create Acid Synth Sequences

There seems to have been somewhat of a resurgence in acid style synth programming of late. So ... I thought I would do a tutorial on how to create that classic acid sound with a standard subtractive soft synth, a heavy dose of glide and some distortion.

This style of programming is really addictive and can be used with pretty much any form of electronic music. Once you have put a sequence together using your synth of choice why don't you upload the result for us all to hear?

All you really need to get this sound is a DAW capable of MIDI sequencing (which is pretty much all of them!) and a synth with glide or portamento and a legato voicing mode. If your not sure what these are just yet, don't worry I'll explain as we go.

I have chosen Disco DSP's Discovery synth, which is a software emulation of the classic Nord Lead 2. Of course you don't have to use exactly the same synth, I just happen to know this particular instrument handles this sort of sound pretty well. If you want to try a demo of Discovery you can pick one up here. 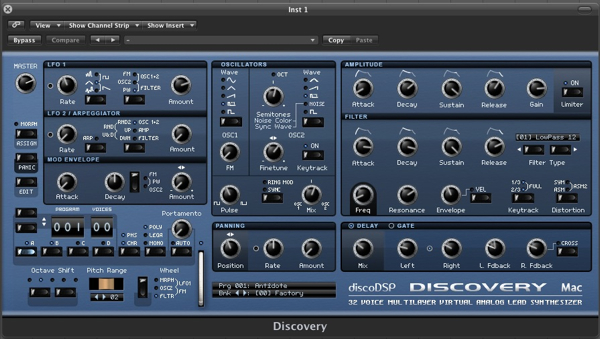 It will prove pretty useful if your chosen synth has some kind of built in distortion or overdrive. A built in delay effect would also be helpful. If your synth doesn't have these features you can use extra plug-ins for the effects, so it shouldn't be too much of a problem.

The sound we are looking to recreate is that of classic acid machines, namely the Roland TB-303. Obviously the result we'll get won't be exactly the same as the magic silver box, in fact it maybe very different but if you get your head around how these sounds are created, the outcome will most certainly have that acid edge.

If we want be authentic the sound should be based on a single saw or square wave oscillator. This will then be fed into a low pass resonant filter and a simple decay based envelope. The classic acid glide is produced by using a mono / legato voicing mode in conjunction with portamento and come overlapped MIDI notes.

Once all these elements are in place we can add some distortion, delay and extra effect such as unison or a phaser for extra depth. So now we know what's in store lets get started.

Step 3 - Our Oscillator and Basic Sequence

On the original TB-303 there was a choice of either a saw or a square wave oscillator, so to keep things as close to the original as I can I'll go with a single saw wave here. Although the 303 was only capable of producing one voice we can always double up to create a thicker sound later in the process.

A single oscillator set up on the Discovery

I have my synth loaded in Logic Pro 9 so this is where I will create my sequence. I have programmed a very simple step based pattern at 127 bpm. This was originally played in, then quantised and finally some extra notes added for pace.

With our single oscillator pattern playing back we are about ready to move on to the next step and start spicing things up a little!

Adding glide effects is arguably the most important part of creating an acid sequence. It's this effect that gives acid machines their distinctive character, so we have to make sure things are right at this stage.

In a lot of synth patches that feature portamento the glide effect is on all the time. This is not what we are looking for here as we want only specific notes to glide and these gliding notes should be programmable. To do this we have to use a legato mode. Make sure your chosen synth has this mode available, it should be in the voicing section where you choose the instruments polyphony.

The glide set up in Discovery

When legato mode is engaged and our glide / portamento is turned on the notes should only glide when they overlap. You can test this by playing a note on the keyboard, holding it down and then playing another. This should may the note glide. If, however you simply play the notes with no overlap, no glide should take place.

It's worth noting at this point that some synths will require 'auto' mode to be engaged in the portamento section. On some synths this is the thing that makes notes glide when overlapped. Some experimentation will be needed from synth to synth as they all work in different ways.

Going back to our MIDI sequence, we can now start to choose which notes will glide and which won't. You can see in my sequence I have just picked a bunch of random notes but of course you may want to be a little more scientific in approach! I tend to find that notes towards the end of bars, or going from low to high work very well here. 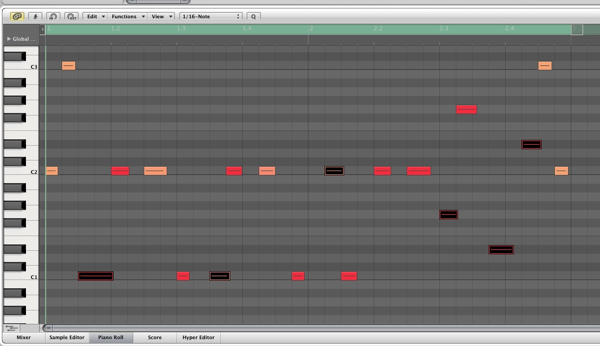 The sequence with some notes overlapped for glide effect

The sequence with the glide effect:

With our sequence playing nicely we can start to add an extra edge using a resonant low pass filter. The addition of a good dose of resonance is pretty important if we are to achieve that famous acid squelch.

A dedicated filter envelope is also pretty important here and you'll want to use a fair amount of decay, with a low sustain and release setting. This will clamp down on each note and add real dynamics and movement to the patch. This filter can then be added when needed and even automated for sections of the sequence. 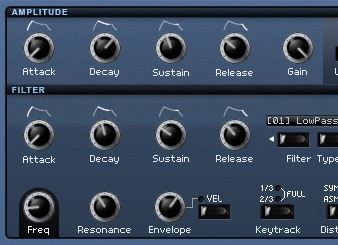 The filter and envelope set up

Your amp envelope will also have to be reasonably close to the filter envelope settings. Of course they don't have to be matched exactly but a decay based signature does tend to work best here.

Once you are happy with the way the sequence is firing you can start to add extra effects to add a little spice. Distortion does tend to work very well with resonant sounds and will add new harmonics, making the whole thing richer and fatter. As I said earlier, many synths have distortion built in and many even feature it at the filter stage. If yours doesn't, pick up your favourite overdrive plug-in ... tube emulations can work wonders here.

The sequence with distortion and delay:

Delay is another effect that can really add to sequence like this. Try something that has a high pass filter so the bottom end remains unaffected. This was all your lovely glides and squelches will be repeated but those all important lows will remain untouched and clear. 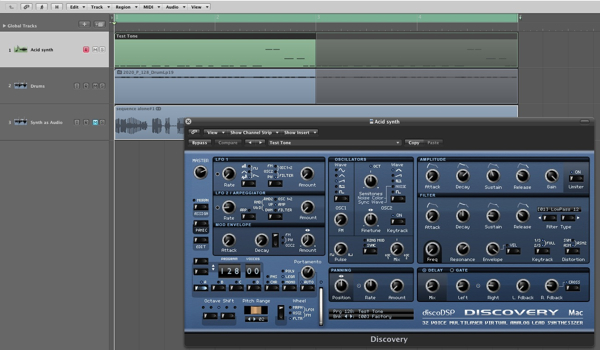 The final patch with effects playing back with some drums

The sequence in action with some drums: