How to Create an 80s Gated Reverb

by Björgvin Benediktsson4 Sep 2012
Difficulty:BeginnerLength:ShortLanguages:
Audio ProductionLogic Pro
This post is part of a series called Masterful Reverb: Everything You Need to Know.
Quick Tip: When Your Reverb is Too Wet... Duck!
How to Create the Reversed Reverb Effect

We've been spending a fair amount of time on reverb lately, with every author chiming in on a reverb related aspect of audio. I did a quick search on what we've been over these few years and interestingly, there haven't been any tutorials on how to create that 80s-ish gated reverb snare sound.

You might recognize this sound, and you might hate it, but the techniques and steps involved in creating are definitely something you should know how to do. It's the sound of Prince and Phil Collins, and although I might not have the exact replicas of their snare hits and beats, this is the technique they used to get their sounds. Even though I say it's an 80's sound, it can definitely be used in any genre that needs this sort of trick.

Step 1 – Put a Simple Beat Together

In the following example I've used a simple electronic beat and added a snare hit on a separate track so I can process it independently. You can't manipulate the snare only if it's a part of a loop, therefore the snare track is by itself.

It's not an awesome beat by any stretch of the imagination, but it'll do for the purposes of the tutorial.

Here are the two elements together, drier than the Sahara desert.

Pretty boring, but it'll do.

Step 2 – Route the Snare to an Aux

Once you have the snare track ready, send it via an aux send to an auxiliary bus. This is where we will do all of the processing, adding reverb and the gating. The aux send will actually be listening to the snare track via the side-chain.

Once the snare is feeding into the aux bus, insert a reverb. Any large hall type reverb will do. You actually want the reverb to sound really big, and cut through immediately. Don't worry too much about the long tail and decay of the reverb. We will cut that off in the side-chaining process.

I'm using Logic's Space Designer, and I went through a few of the larger reverb presets before I found a decent one. You'll definitely need to browse your reverbs to find one that works. Take the time to find the best one, because otherwise it can sound really unnatural.

Here's what we have after we've inserted our reverb:

As you can hear, that's one long reverb tail. We'll be fixing that in a minute. For the sake of consistency, I've sent our electronic loop to a separate bus with the same reverb, just to give it the same feeling of “space.” I'm not adding much, just enough to get it a little “wet.”

Things are starting to drown in reverb, let's start cleaning up.

After you've found a really nice reverb patch, insert a noise gate directly after the reverb on the auxiliary bus. This gate will now control the amount of reverb that's being let through, and you can use the attack, hold and decay parameters to control the shape of the reverb.

Start by pulling the threshold up until you can't hear the reverb anymore. You want the gate completely muting the reverb. 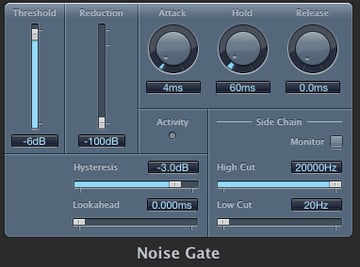 For instance, listen to the two different sounds the gate makes with the same gate settings, but listening to different waveforms.

Regular, just listening to the reverb:

Gated reverb, side-chained to the snare:

Now the fun part starts. Once the snare is side-chained to the reverb, you can use the gate to manipulate the amount of reverb you're letting through. In my example I'm using a fairly long attack time so the reverb almost feels like it's swelling in from the snare hit, giving it an inhaling sound. If you have the release fairly fast you can really hear the gate clamping down on the reverb, creating a kind of sucking sound.

The point here is to make the snare sound like it's breathing. You can't have the hold too fast because then the gate doesn't really open up enough. You need the hold parameter to be just long enough for the attack and release to do their thing. 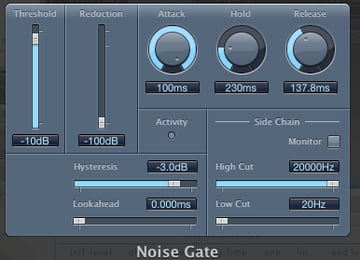 Here's what I end up with. One could certainly fiddle around endlessly, and if you were using this particular effect in a mix you could also automate it so that the gated effect only happens every once in a while. Just to create interest and contrast to the regular beat, a la “God Shuffled His Feet” by the Crash Test Dummies.

There you have it. Not only is side-chaining your reverb like this useful for creating an out-of-date snare sound, but you can also use it to thicken up snares. Just use shorter reverbs and modify the gate parameters. It can give your snare an added thickness and depth without really making it sound overly “reverbed.”