Twice a month we revisit some of our reader favorite posts from throughout the history of Audiotuts+. This tutorial was first published in March 2009.

Synthesis can certainly be a daunting subject. There are a huge number of software instruments on the market now, many of which feature different forms of synthesis and varying styles of interface. To the beginner this huge choice and tech jargon may be slightly confusing, to say the least.

To help clear things up let's start by taking a look at the ever popular area of subtractive synthesis and how to create a basic effects patch. I will show how the patch is made and explain each step and also recreate the sound using some instruments from popular DAWs. Obviously the recreations may not be exactly the same as the original patch but they should show that any synth can be used to create a good range of sounds.

For this tutorial I have chosen to use a synth called Circle to demonstrate the initial creation of the effects patch. Unfortunately it's not free but when I was searching for the right instrument to use, it ticked all the right boxes. It is available as VST, AU and a standalone application, and it's also Windows and OS X compatible. It runs for 20 minutes in demo mode, so there should be plenty of time to try and recreate the patches. You can download the demo here.

The demo has limited load and save functions so you may have to settle for the screen shots when following the steps. Alternatively, you can recreate the sound using your favorite soft synth or load one of the patches in the Play Pack. If you have Ableton Live, Reason or Logic, you are in luck. 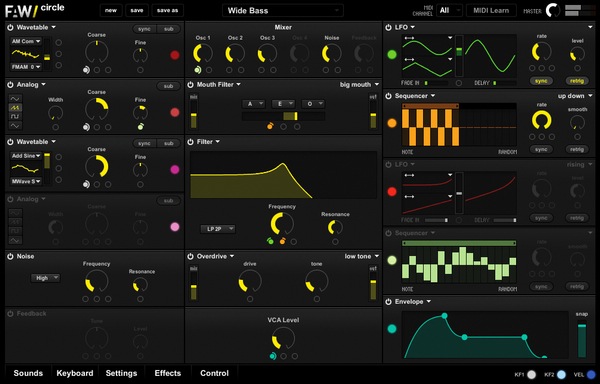 The best place to start when programming any sound, on any instrument, is a blank initialized patch. It's sometimes a good idea to have one oscillator switched on but all envelopes, filters, LFOs and modulators should be at zero. This way you won't be influenced by a particular preset or routing that was previously loaded.

Looking at the initial patch I have constructed using Circle, you should be able to see that only one oscillator is turned on and that it is a saw wave. Most synths tend to use one saw wave oscillator in their default patch, more out of tradition than anything else but it is certainly a good idea to build your new patches this way, then any synth you use will have the same starting point.

Moving on we can see that the filter is set to a low pass model, it is also completely open with no resonance dialed in. The filter is also not modulated by any other part of the synth, and in fact there are absolutely no modulations going on anywhere at this point. Circle displays its modulations in a very innovative fashion, using colored circles in each area of the instrument. These can be simply dragged and dropped to achieve the desired routing.

The envelopes are also reset, creating an on/off effect, with no attack or release at all. Both the amplitude and filter envelopes have identical settings at this point to avoid any confusion. The LFOs are all at their default values and no routing is taking place. The result of all this initialization is a very simple and straight-forward saw wave patch with no frills. Try making one of these for your favorite synth, or maybe there is one included in its sound bank. 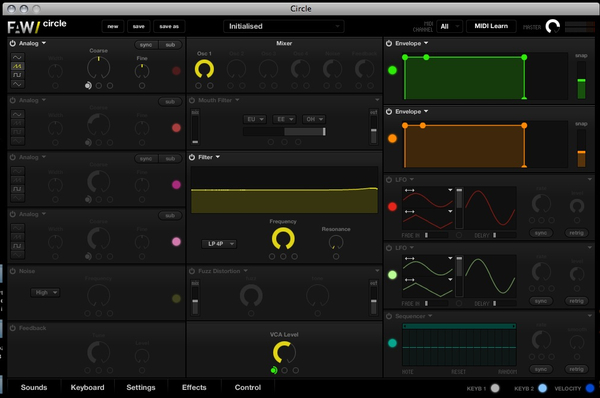 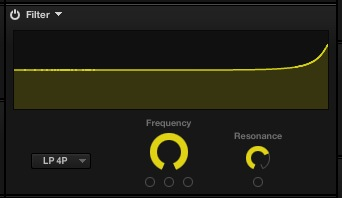 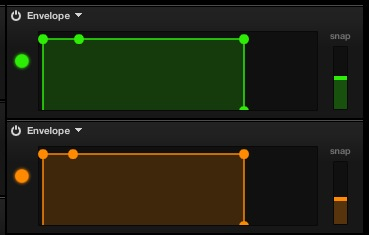 Step 3 - Setting up the oscillators and filter

Once we have initialized our patch we can start to build the sound from the ground up. It's a good idea at this point to visualize the sound you want to make and picture the steps you will have to make to achieve it. In this case I want to make a resonant, falling effect that is modulated by an LFO as it falls. I need the sound to have a decent amount of impact and play back at no particular pitch. Think of this stage as writing yourself a brief for the sound you want to make, you can then work through all the requirements to construct your patch.

I have decided to opt for a noise oscillator as this will provide a good base for an effects patch and it will prevent the sound from playing back at a certain pitch and therefore will lend itself to being used in any project. Circle has a dedicated noise oscillator, so I have turned off the saw wave. Other synths may have oscillators that can simply be switched to noise, every instrument differs in its operation so be prepared to spend a few minutes finding the right parameter.

Your noise oscillator should now play back in the same way as the saw wave in the initial patch, with an on/off type effect. We are now ready to add some resonance to the sound using the synth's filter section. I have chosen a low pass filter model as this is what we will be using to create the downwards sweep. I have then turned the resonance up to nearly full. I haven't gone all the way due to the fact some filters will 'self-resonate' at very high settings and in effect become their own oscillator, masking any other sound source used. I wanted to hear the noise really come through in this patch, so I held the level back a little.

To let you hear the effect of the filter on the noise waveform I have performed a manual sweep across most of the filter's range. You can really hear the resonance as the sweep takes place here and it compliments the noise really well. The sound is starting to take shape but is still very rough around the edges. 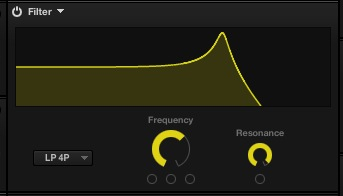 The manual sweep in the previous step gave us a good idea of how the final patch will sound but now it's time to automate that sweep so it happens every time we hit a key. We do this by using an envelope to control the movement of the filter's frequency. This involves setting up a modulation mapping that enables the envelope to control the filter. Don't worry, this is pretty easy and with most synths (especially Circle) it is a transparent process.

To allow the envelopes to control the filter in Circle, it is simply a case of dragging the small colored circles that are situated in various places on the synth to the desired location. The mapping is then complete and the two sections of the synth linked. Of course in other instruments the process may be different and can involve modulation matrices or a group of dedicated knobs but the theory always remains the same.

The amount of modulation can now be set, and here I have moved the fader all the way to the bottom giving the envelope a negative polarity. Using the snap control on the filter you can adjust the curve of the fade which has now been created. A perfectly sculpted filter sweep has now been created which sounds considerably smoother than the manual version. 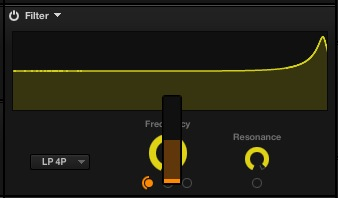 To add some extra movement and interest to the sound we can use LFOs to modulate any part of the sound we like. Here I have used one LFO to control the cut off frequency as the envelope sweeps it. The result is a wobbling effect as the frequency drops.

For further depth the LFO speed is then modulated by the original filter envelope, and this causes the LFO to slow down as the sweep progresses. A really nice effect and very simple to create. When all the different components come together you have a really usable effect that can be created with just about any synth.

To show this sort of sound can be created on most synths, I''ve quickly recreated the patch as closely as possible using some popular synths that are bundled with well-known recording software products. 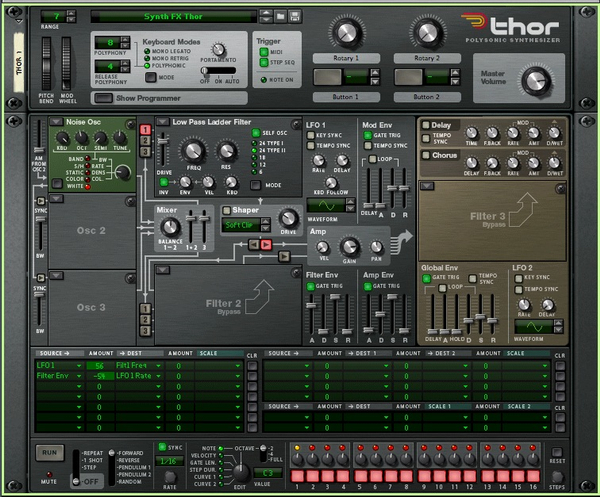 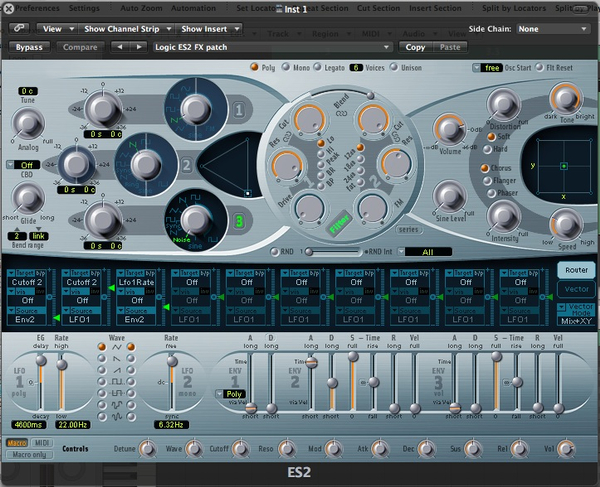